Government spokeswoman Narumon Pinyosinwat on Monday appeared undaunted by criticism of her new responsibility in the ruling Palang Pracharath Party's (PPRP) economic team while maintaining that her party role had nothing to do with the government's economic line-up.

Doubts over her ability and expertise were raised after PPRP secretary-general Anucha Nakasai revealed last weekend she would lead the party's economic affairs, with some observers seeing it as a sign she could be included in the government's economic line-up when a cabinet rejig takes place. 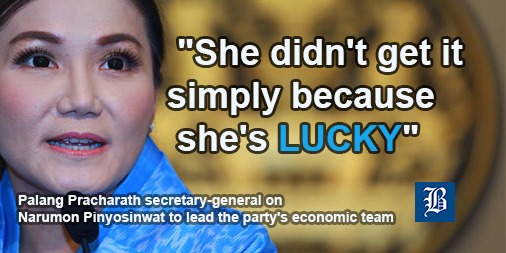 Ms Narumon on Monday dismissed the criticism as normal. However, she said she would pay heed to it for self improvement. She also clarified that she will not be leading the PPRP's economic team as some may have understood and that her role was not related to the government's work.

"To prevent further confusion, I'd like to explain that I'm not the head of the [PPRP's] economic team.

"We will gather input from various actors and turn it into party policy for the prime minister and the cabinet to consider," she said.

However, she de­fended herself against criticism about her economic expertise.

She said she had vast academic experience both in teaching and in policy research, worked as a consultant on the stock market and the banking system for over 10 years and served as a board member in the private sector.

Ms Narumon worked as vice minister for finance under Apisak Tantivorawong in the previous Prayut Chan-o-cha government prior to last year's election and before she joined the PPRP.

However, she said whether or not she was qualified to hold a cabinet post was not for her to say. The matter is entirely up to Gen Prayut, she added.

Ms Narumon strongly rejected media reports about strained relations between the party and the government's economic team headed by Deputy Prime Minister Somkid Jatusripitak, saying the change in the PPRP leadership might have triggered such speculation.

She was referring to the election of a new leader and executive board at the weekend in which former PPRP leader and current Finance Minister Uttama Savanayana and ministers close to him were purged.

Some critics called the move as backstabbing as Mr Uttama is known to be working hand-in-hand with Mr Somkid.

Nataphol Teepsuwan, a PPRP executive member and the education minister, confirmed Ms Narumon's new role did not equate to chief of the party's economic team.