Uttama has no plan to form new party

A cabinet reshuffle looms after the resignation from the ruling Palang Pracharath Party (PPRP) of three cabinet ministers, including the finance minister.

The resignations will spark jockeying for cabinet seat quotas, with Prime Minister Prayut Chan-o-cha confirming on Thursday that a reshuffle will be necessary, though cabinet ministers who have performed well will be allowed to stay on.

"A cabinet reshuffle can take place any time from now on. I did not say I would definitely reshuffle in September. Changes will be made where necessary. Those who already work well will carry on. I am not saying who is not good. It's the way of politics," Gen Prayut said.

September is when the 3.3-trillion-baht budget bill for the fiscal year 2021 is expected to be passed by parliament before budget spending for the fiscal year 2021 starts on Oct 1. The House of Representatives passed the budget bill's first reading last Friday. The House appointed a 72-member vetting committee to scrutinise the bill within 30 days.

Gen Prayut on Thursday admitted that outsiders have been approached to join the cabinet, though some have not accepted the invitations.

Commenting on the resignations of the three ministers, Gen Prayut said the cabinet posts were personal quotas, not party quotas. Mr Uttama, Mr Sontirat and Mr Suvit will remain as cabinet ministers for now, he added. When asked whether all the resignations will affect the party's ministerial quotas, Gen Prayut said it is an internal matter for the party because the ratio of those appointed to be ministers was determined by the number of MPs which each party had obtained in the election.

Gen Prayut said the cabinet also has a quota of outsiders. He said he is not a member of the PPRP so the ratio of those appointed to become ministers must depend on the PPRP.

When asked the resignation of the four PPRP members is part of the prime minister's quota, he said it was orginally. So today he would have to ensure the appropriateness of adjusting ministerial quotas.

Gen Prayut said a reshuffle must take into account the quotas of other coalition parties.

The prime minister also said he has postponed a meeting of economic ministers today because he wanted to listen to opinions from his advisers. The resignations of the three ministers followed a leadership change inside the party last month that saw Deputy Prime Minister Prawit Wongsuwon rise to replace Mr Uttama as party leader, and Anucha Nakasai replacing Mr Sontirat as secretary-general. 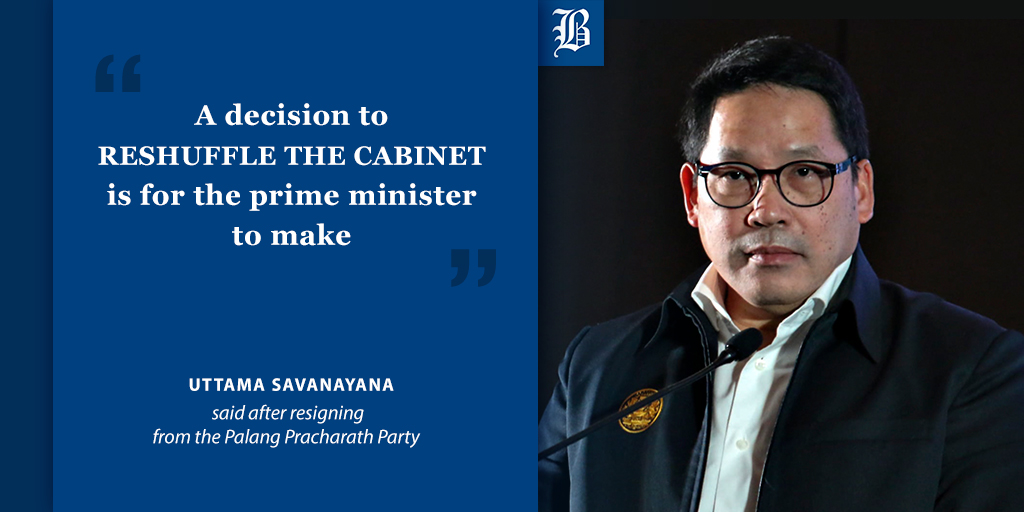 Gen Prawit's rise was backed by the Sam Mitr faction, which includes Mr Anucha and Industry Minister Suriya Jungrungreangkit, in sweeping a group led by Mr Uttama out of the party. All four members who resigned from PPRP are part of the economic team engineered by Deputy Prime Minister Somkid Jatusripitak.

Some PPRP members backing Gen Prawit have demanded a cabinet reshuffle now the party has a new leader, but Gen Prayut has kept them guessing, a party source said. The premier said during his visit to the Bangkok Post on Wednesday that he would select the most skilled people should he decide to reshuffle the cabinet.

The four former PPRP members said they would continue working in their cabinet portfolios for now. "A decision to reshuffle the cabinet rests with the prime minister," Mr Uttama said, adding he has no plan to set up a new party.

Mr Sontirat said he and his three colleagues left the PPRP with no hard feelings towards the party which he and Mr Uttama had formed to support Gen Prayut's rise to the premiership after the general election last year.

The resignations came before the PPRP general assembly today. Gen Prawit will chair the meeting as leader.