PM denies reports that NESDC chief Thosaporn was being considered

Predee Daochai, a Kasikornbank co-president and chairman of the Thai Bankers' Association, is being considered as the country's next finance minister.

Prime Minister Prayut Chan-o-cha has confirmed that he had approached banker Predee Daochai to join a new cabinet lineup and dismissed reports that the head of the National Economic and Social Development Council (NESDC) was a candidate.

The prime minister acknowledged for the first time on Friday that he had contacted Mr Preedee to join the government and said he was waiting for a reply.

Mr Predee is a co-president of Kasikornbank and chairman of the Thai Bankers' Association. His name surfaced as a potential candidate for finance minister following the resignations of Uttama Savanayana and four other cabinet members, including Deputy Prime Minister Somkid Jatusripitak.

The prime minister said he needs the “right person” to steer an economy still in serious trouble because of the coronavirus outbreak. Most forecasters expect Thailand, with its heavy dependence on foreign tourism, to post the worst economic contraction in Southeast Asia this year, possibly in the range of 8%.

Gen Prayut denied reports that NESDC secretary-general Thosaporn Sirisumphand had been asked to join the new economic team, adding that no civil servants would be approached to leave the bureaucracy to join the lineup. 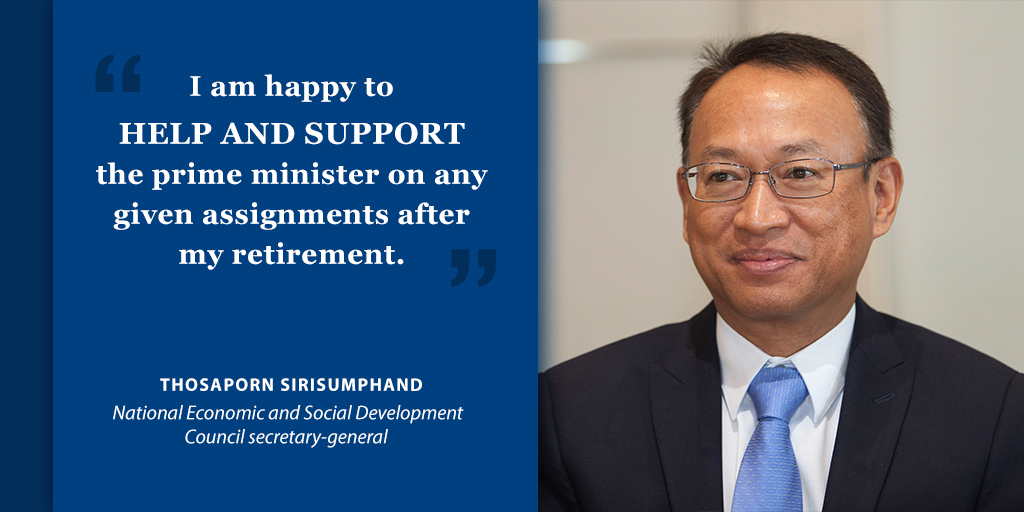 “I am still working as the NESDC secretary-general with a mission to oversee and screen projects under the 400-billion-baht borrowing scheme to achieve its goals,” Mr Thosaporn said in a post on the NESDC Facebook page.

“However, I am happy to help and support the prime minister on any given assignments after my retirement.”

Mr Thosaporn will retire at the end of September.

The name of Prasarn Trairatvorakul has also surfaced as a target of the prime minister but Gen Prayut said the family of the former Bank of Thailand governor did not want him to get involved.

The prime minister has promised to complete the new lineup by August and also indicated on Friday that he would continue to keep the top job at the Defence Ministry.

“Today I am still steering this horse. Everything remains unchanged,” he said when asked about his double duty as the prime minister and defence minister.