Apirat cautions protesters to watch what they say about the monarchy

Students at Kasetsart University hold their flashing mobile phones aloft as part of their protest against the government at the main campus in Bang Khen on Friday. (Photo by Pattarapong Chartpattarasill)

A group of Triam Udom Suksa School students braved a downpour on Friday to lend their voices to a growing wave of anti-government protests, while other events were staged at Kasetsart University and at least two other provinces.

As the youth-led movement gathered momentum, Army chief Gen Apirat Kongsompong said that while the protesters have a right to criticise the government, they should not disrespect the monarchy.

He said the current protests seemed like they might be part of a conspiracy, but he refused to speculate on who might be pulling the strings. 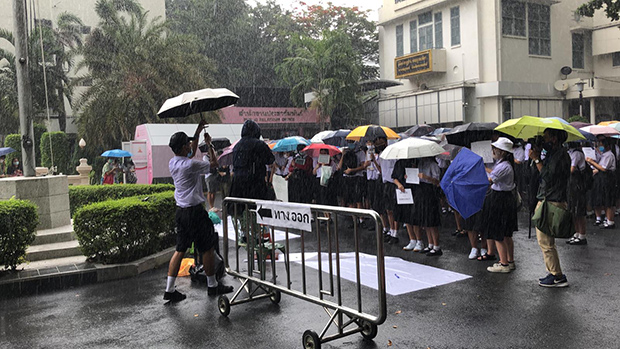 Students brave the rain to gather at Triam Udom Suksa School for an anti-government rally on Friday afternoon. (Photo from @TLHR2014 Twitter account)

The high school students at Triam Udom Suksa defied the rain to hold a brief rally, brandishing protest messages on paper placards and turning on their mobile phone lights. The latter has become a symbol of the campaigners who are demanding that Prime Minister Prayut Chan-o-cha dissolve Parliament. They are also calling for an end to state and judicial intimidation of critics and the start of a new charter-writing process.

The three demands were first outlined in a bigger rally that drew about 2,500 people at Democracy Monument last Saturday before it spread to other venues.

Another group of students at Kasetsart University converged on the main campus in Bang Khen to make the same calls and light up the evening sky with their phones. 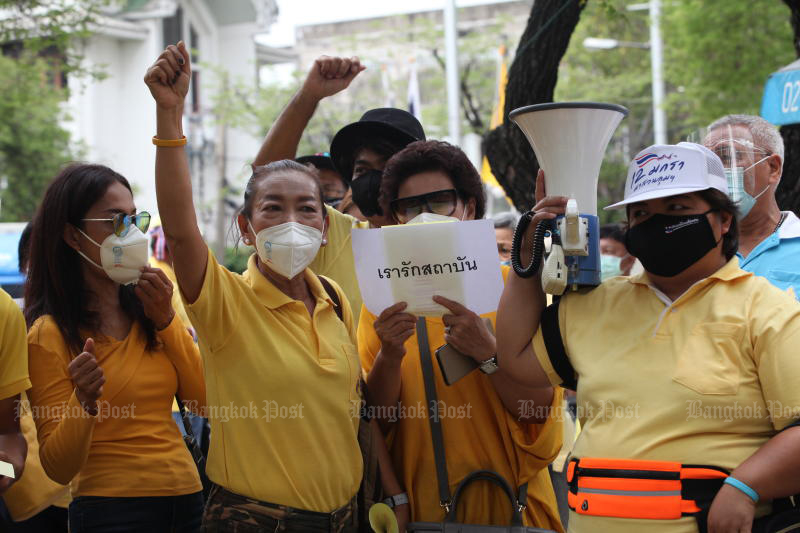 A pro-monarchy group gathers outside Royal Thai Army headquarters on Friday to air their concerns about the monarchy being dragged into anti-government protests. (Photo by Apichart Jinakul)

In Udon Thani, police counted about 500 protesters, largely university and school students, at Thung Sri Muang, the landmark of the northeastern municipality.

A student leader who asked that his name and university not be disclosed, read out a statement criticising the prime minister for using the constitution to hold on to power since the coup in 2014.

At the Thao Suranaree statue in Muang district of Nakhon Ratchasima, a rally drew almost twice as many as in Udon Thani, according to a reporter at the scene.

Student leaders made the same demands and urged other protesters to put their demands in writing.

Earlier in the day, a yellow-clad group gathered outside the Royal Thai Army headquarters to submit a letter to Gen Apirat through his representatives.

Thai-Indian businessman Sathit Segal said he was concerned about a movement against the monarchy. The protesters had the right to freedom of expression but they must not offend the country’s highest institution, he said.

Gen Apirat said he was well aware of people’s rights and freedoms in a democratic system but the protesters’ actions were making people feel uncomfortable.

In any case, he said he was not overly concerned and that police would take care of any problems that arose.

In Chiang Mai, Prime Minister Prayut Chan-o-cha urged people of different generations to cooperate to create something new, saying that it was impossible to dismantle everything.