Student leader Parit Cheewarak confronts a police officer outside the Bang Khen police station, where they vowed not to disperse until activists Anon Nampa and Panupong Jaadnok, who are detained at the Huai Kwang police station, are freed. (Reuters photo)

Police on Friday night detained two pro-democracy activists at a police station over a demonstration last month as leaders of the student protest movement vowed to escalate their anti-government demonstrations.

The court declined just before midnight to process a police request to jail the two men for 12 days of pre-trial detention, with an official stating that the police proceedings were filed too late.

Police said they would hold the two overnight and return with their petition at the court on Saturday morning.

"Today, we arrested these two men and we sent them to the court to ask them to be jailed, but because it is after the court's working hour, the court sent them to be detained by us," Pol Col Purit Jintranan of the Huai Kwang police station told reporters.

Mr Anon drew national attention on Monday by calling for reforms of the powerful monarchy, but police said the arrest warrant served on Friday did not refer to that speech but to an earlier protest on July 18 for breaching internal security by "raising unrest and disaffection".

The two face charges of sedition, violating the emergency decree and other offences.

Another 200 people rallied outside the Bang Khen police station on Friday night, where they vowed not to disperse until the two men were freed. Among them was Parit “Penguin” Cheewarak, a student activist at Thammasat University, who said he was also the subject of a warrant. He said he intended to use peaceful disobedience because he views his arrest as illegitimate. 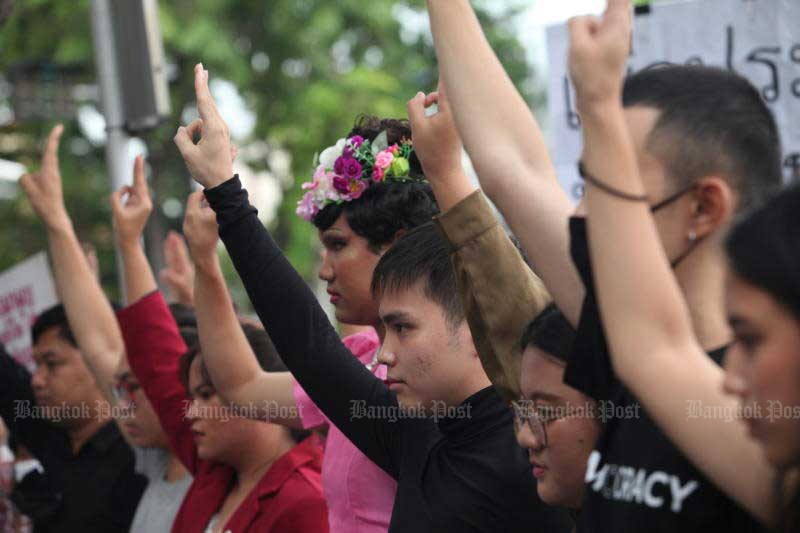 Young protesters flash the three-finger anti-coup sign as they gather near Democracy Monument on Ratchadamnoen Avenue on Friday. (Photo by Apichart Jinakul)

The arrests come just days after the inauguration of the Free People group, which grew out of the Free Youth group that has staged protests across the country over the past three weeks.

The protesters are demanding the resignation of the current government, an end to state harassment of government critics, and a new constitution.

The Free People group on Friday called for another mass rally on Aug 16 and gave an ultimatum that a charter rewrite must be carried out and that a dissolution of parliament must take place by September.