Anti-government activists burn a paper mock-up of the 2017 constitution during their brief rally in the grounds of parliament on Monday. (Photo: Chanat Katanyu)

Anti-government protesters have made clear their position on constitutional issues, demanding a new charter be written to end the prolonged hold on power by the coup makers.

They made their call outside the parliament, which was the venue of two rallies on Monday. Another group gathered nearby with a pledge to protect the monarchy.

About 30 activists and members of the Committee Campaigning for a People's Constitution (CCPC) took part in the rally.

"The 2017 constitution was designed to prolong the power of the coup makers and the elite group who supported them," CCPC leader Anusorn Unno declared.

The main thrust of the bill is the election of charter writers to work on a new constitution.

Pheu Thai MP for Maha Sarakham Sutin Klangsaeng accepted the petition and promised to work with the other five opposition parties in pressing for a new charter writing panel.

"The present charter has flaws that prevent the country moving forward," said Mr Sutin, who is the opposition chief whip.

The CCPC's position is in line with one of the three demands spelt out by the youth-led Free People Group, the main driver of anti-government rallies. They also want the dissolution of the House and an end  to the intimidation of critics of the government.

The group's stance differs from the position of the coalition parties and Prime Minister Prayut Cha-o-cha, who favour a charter amendment.

The CCPC rejects attempts in parliament to alter some sections of the charter, as that would not reflect the will of the people, Mr Anusorn said.

The CCPC was formed in September last year by 20 networks to campaign for a new charter. Mr Anusorn, who leads the campaigners, is a lecturer at Thammasat University's faculty of sociology and anthropology. (continues below) 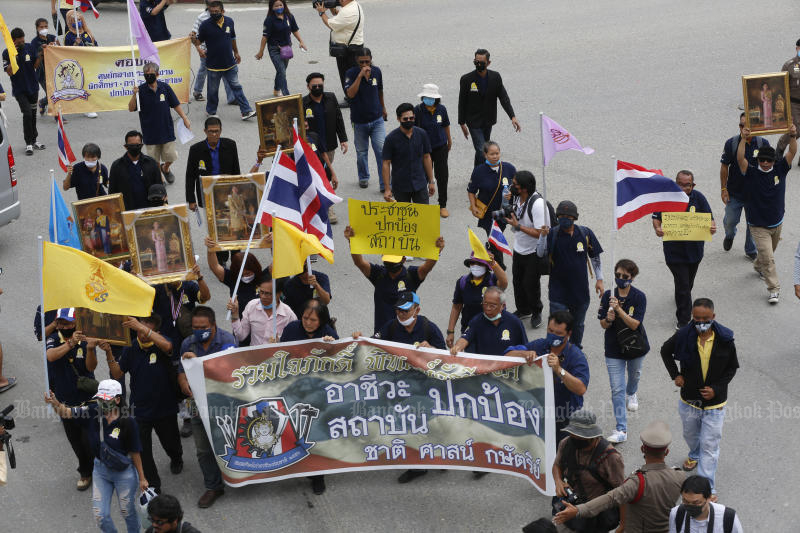 Pro-royalist demonstrators walk to Parliament on Monday to show their determination to protect the monarchy. (Photo by Pornprom Satrabhaya)

They called for House Speaker Chuan Leekpai to use the legislative body to protect the monarchy from attacks by anti-government demonstrators.

The Free People Group has pledged a big rally at the Democracy Monument on Sunday.