The pro-government Coordination Center of Vocational Students for the Protection of National Institutions (CVPI) gather at Parliament on Monday to protect key institutions in response to the youth-led Free People's activities that demand change since last month. (Photo by Pornprom Sattrabhaya)

Dozens of supporters rallied in front of Parliament on Monday in support of the Gen Prayut Chan-o-cha government.

Thousands later joined an anti-government demonstration at Thammasat University on the outskirts of Bangkok, the largest such protest by students, challenging the government and conservative royalist establishment.

In a sign of a more coordinated opposition to the students, a former nationalist activist, Sumet Trakulwoonnoo, 46, announced a new pro-government group, the Coordination Center of Vocational Students for the Protection of National Institutions (CVPI).

"A group of people is instigating young minors to come out and attack the military, the government and also involving the monarchy, and this could lead to violence and destruction of our system of governance and our culture," Mr Sumet told reporters at the rally.

"We're setting up to remind youth groups, parents, teachers and officials about the danger to the nation from these people who are instigating youth to become godless and obsessed with Western culture, do drugs and hate their parents and teachers."

The anti-government protesters have made a growing number of veiled references to the monarchy, a highly sensitive topic, and one speaker at a recent rally called for its reform. (continued below) 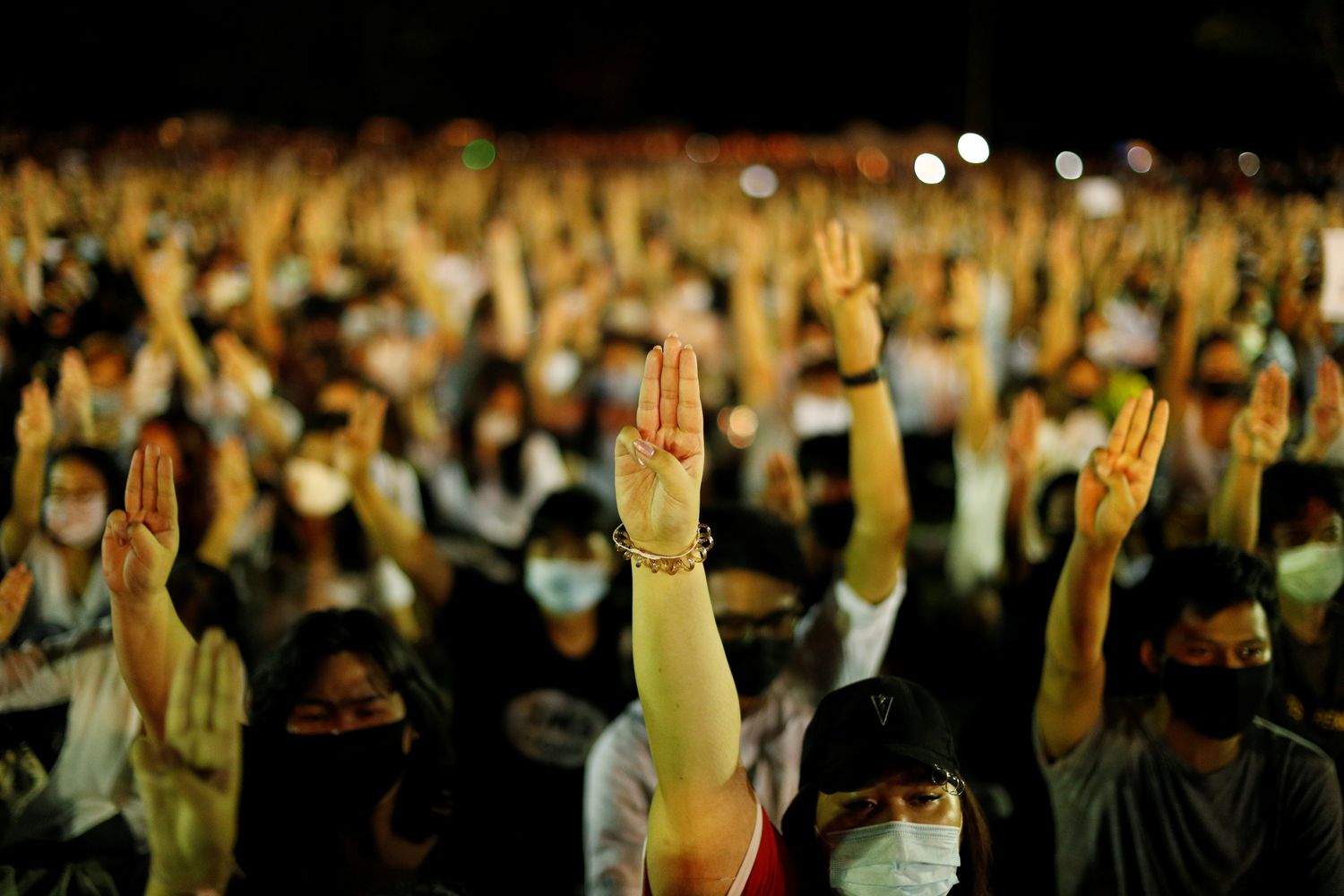 Pro-democracy protesters do a three-fingered salute as they attend a rally to demand the government to resign, to dissolve the parliament and to hold new elections under a revised constitution, at Thammasat University's Rangsit campus outside of Bangkok, on Monday. (Reuters photo)

The students accused the pro-government demonstrators of trying to create confrontation which could lead to another military intervention.

"They staged a counter protest today to create a condition that could lead us to another coup," Nick Thanawit, a student activist from Maha Sarakham University, told the crowd on Monday.

"We do not want this and will oppose it."

Gen Prayut has said that the government is creating a way for political groups to express their views but he has voiced concern about confrontation.

The reaction from authorities to the anti-government protests has been limited but two activists were arrested on Friday on charges of sedition and breaking restrictions to stop the spread of coronavirus, prompting a protest by more than 1,000 people in Bangkok on Saturday.

The two were later released on bail.

Human Rights Watch said that several protesters around the country had faced harassment.

"Legal action and harassment are intensifying despite Prime Minister Prayut's promises that the government would listen to the dissenters' demands and concerns," said Sunai Phasuk, senior researcher on Thailand for Human Rights Watch.

"We don't want to see violence or expressions beyond the bounds of the law," Ms Rachada told Reuters.

Ek-Chai Distribution System Co, the operator of Lotus's retail stores, looks set to allocate 3 billion baht to open its next-generation stores over the next three years.