House 'must step in to end crisis'
Thailand
Politics

House 'must step in to end crisis'

State of emergency could backfire: scholar

STORM BREWING: Protesters open their umbrellas or wear plastic rain coats to protect them from the rain as they converge at the Lat Phrao intersection. It was one of several protest sites in Bangkok with a heavy turnout on Saturday.

A university academic is calling on parliament to step in to end the political crisis as a former premier calls for the resignation of Prime Minister Prayut Chan-o-cha.

Dr Chaiyan Chaiyaporn, Chulalongkorn University political scientist, said parliament can play a role in resolving the crisis and it is allowed to do so under the constitution.

Calling an extraordinary parliamentary session to discuss the political conflict can easily be achieved if the government takes the initiative, he said.

He pointed out the Thaksin administration chose to dissolve the House instead of convening the House to address its political conflict.

Prof Dr Chaiyan said the current government opted to declare the state of emergency to deal with protesters and warned that if the measure failed to restore order and disrupted people's livelihoods, it would backfire against the government.

He said with the protesters converging at key locations, including business centres, the gatherings could affect people's livelihoods similar to the protests in Hong Kong, while pressure would be mounting on the government.

He said it is likely that activists will intensify their activities as the protest drags on, and the government is likely to respond in kind.

Dr Piti Srisangnam, Chulalongkorn University's economist, yesterday called on the government to release protest leaders who had been detained, saying a protest without a leader is a dangerous one and could lead to violence. The group needs leadership for the sake of everyone, he said.

He criticised the government for rushing to disperse the anti-government protests, even though the procedures were in line with standard practice.

He also warned the protesters not to resort to violence, adding they should be aware of those with a hidden agenda wanting to use activists for personal gains.

"Please head home if things don't look good. Don't resort to violence. Being heroes in a picture frame is useless.

"As for the political quarters, it's time to ease restrictions. First, the protest leaders should be released. A protest without a leader is more dangerous and if things turn violent -- you lose anyway even though you can quell the protest," he said.

He said the government should first address the protesters' demand for the charter rewrite, which could appease some protesters.

Prime Minister Prayut Chan-o-cha should have a sit-down talk with the protesters and reshuffle cabinet and get rid of those who are deemed unacceptable by the public.

On the protesters' call for reform of the royal institution, a discussion about the issue should not be rushed.

She said when she faced the street protests, she decided to dissolve the House and call for a snap election to let the people decide.

"The current protest reminds me of the question you once asked. I hope you remember and make a quick decision so peace and order return and the country can move forward," she wrote. 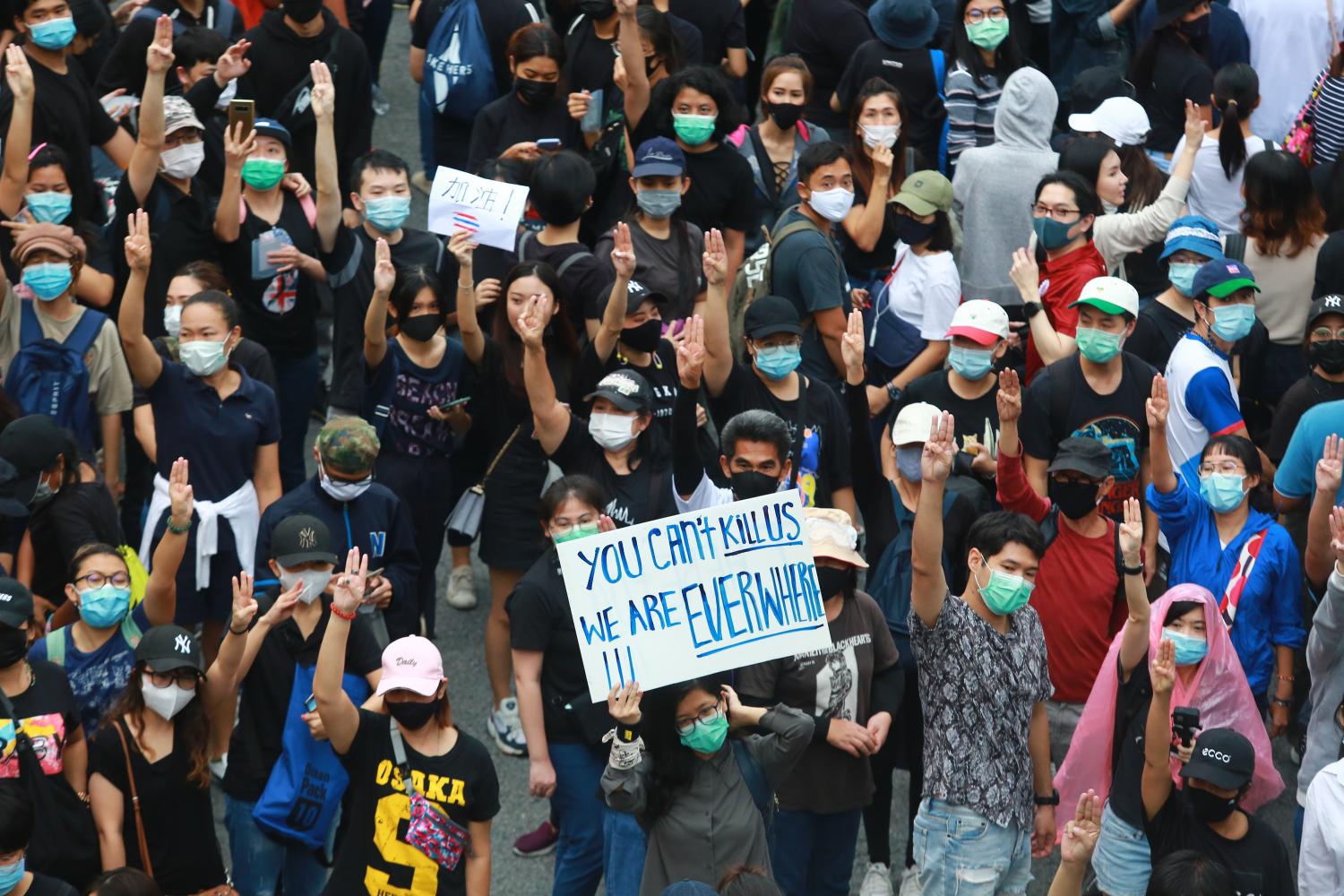 omnipresent: Protesters who gather at the Bang Na intersection hold up a placard which reads 'You can't kill us. We are everywhere.'

The Election Commission (EC) is defending its MP calculation method, which takes into account non-Thai residents, for the coming election, saying it is in compliance with the kingdom’s civil registration law.