Gen Prayut’s pledge during a television address to review the state of emergency issued last week came as thousands of protesters marched to the prime minister’s office known as the Government House in Bangkok on Wednesday. Simultaneous rallies by pro-royalist groups in support of His Majesty the King also raised fears of clashes between the rival groups.

Gen Prayut urged the protesters to use a special session of the parliament next week to air their grievances through lawmakers and said the government and the activists should “each take a step back” and “find solutions to the problems.”

“The only way to a lasting solution for all sides that is fair for those on the streets as well as for the many millions who choose not to go on the streets, is to discuss and resolve these differences through the parliamentary process,” Gen Prayut said in a prepared speech.

Gen Prayut said his promise to end the emergency decree -- "if there are no violent incidents" -- was a gesture to end the street protests and take the issues to Parliament. He appealed for talks before the conflict became too severe.

"I am appealing to all sides that we must heal wounds now before they become too deep," he said. 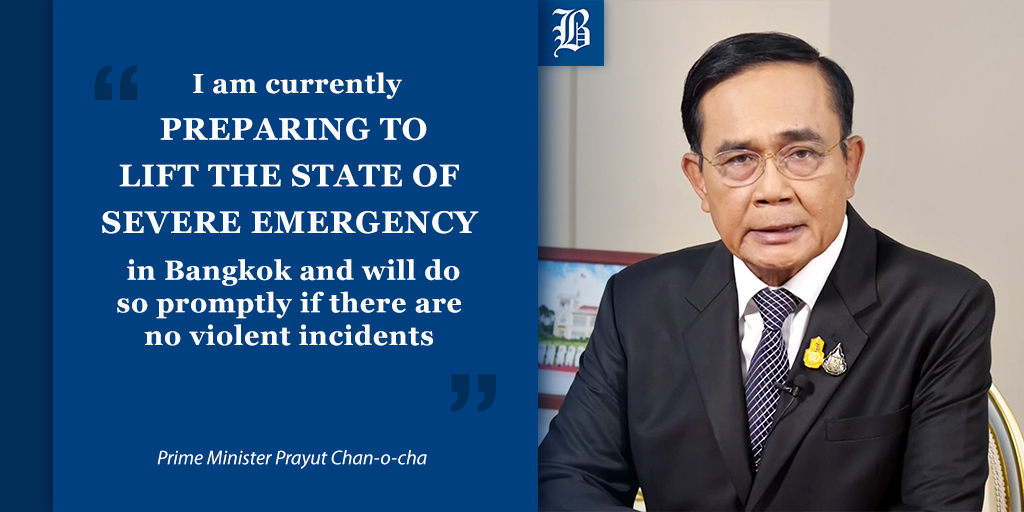 Protests have swept Bangkok and other cities in the past week in defiance of the ban on gatherings and the threat of crackdowns by the police. They have broken long-held taboos about publicly criticising the royal family and questioned laws that stifle discussion of the monarchy.

The youth-led protesters are calling for the resignation of Gen Prayut’s government and a rewriting of the constitution, which was drafted by a military-appointed panel after the premier, a former army chief, took power in a 2014 coup. The activists say the charter was instrumental in helping Gen Prayut retain power after the 2019 elections.

“The only sure way to achieve a sustainable, enduring resolution to the problems is to speak to each other, respect the due process of law, and then let the will of the people be resolved in parliament,” Gen Prayut said. That is the only way.”