Anti-government demonstrators march along Rama IV Road from Samyan intersection to the German embassy on Sathon Road in the evening.

A bid to amend the 2017 constitution is likely to be hastened when parliament reconvenes next month after Prime Minister Prayut Chan-o-cha told a special meeting on Monday that the scrutiny process should be completed by December.

Speaking before a joint session of MPs and senators to discuss a solution to the political conflict, Gen Prayut said the government had been trying to solve it as quickly as possible.

Yellow-shirts gathered outside the German embassy to show support for the monarchy and left before anti-government protesters marched to present the embassy with a petition asking German authorities to look into the matter of His Majesty the King living in Germany. (Video by Jetjaras Na Ranong)

He reminded MPs that his government had held talks on charter amendments with the leaders of the coalition parties on Oct 6. He said the study was likely to be completed by the end of the year and the government would present a bill on a national referendum to parliament next week.

"This proves that I support charter amendments," he declared. "The government isn't being idle. We are trying to solve as much as we can, as fast as we can."

The charter amendment push was thwarted in late September when parliament decided to set up a special committee to study draft constitutional amendments and thus delayed the vote.

A two-day special meeting was convened on Monday under Section 165 of the constitution in the wake of escalating street protests demanding Gen Prayut's resignation.

The special session is taking place before the scheduled resumption of parliament on Nov 1.

Parliament president and House Speaker Chuan Leekpai said on Monday he would hold informal talks with the government, political parties and senators to see if they wanted to wait for the charter amendment bill proposed by the civil group iLaw.

Currently, the names of the signatories to the iLaw-proposed bill are being verified and a deadline of Nov 12 has been set for anyone wanting to contest their authenticity.

Mr Chuan said if parliament decided to wait for the iLaw-sponsored version, the amendment debate would likely take place in the middle of November but if they are happy to proceed with the six bills they already have, the debate can be held early next month.

Deputy Prime Minister Wissanu Krea-ngam said charter amendments could only be decided by a national referendum and a referendum bill should be completed in December or January.

Regarding calls for the PM to step down, Mr Wissanu said if Gen Prayut resigned, it might lead to a stalemate due to the rules involving the vote for a new premier. The successful candidate must receive at least 366 votes from parliament.

Mr Wissanu said if the mili- tary-appointed Senate abstained from the vote -- as demanded by the protesters -- candidates for prime minister might not receive enough votes to be elected.

Leader of the opposition Pheu Thai Party Sompong Amornwiwat said the government must urgently amend the constitution without any foul play to quickly address the root cause of the country's crisis. He also called for the immediate release of detained protest leaders.

Mr Sompong insisted that the PM resign and in doing so accept responsibility for all his past mistakes and failures.

The opposition leader blamed the government for making the conflict worse by stirring up trouble. He said the Chan-o-cha government had zero legitimacy from the start to write a new constitution in order to maintain its grip on power.

Senator Amphol Chindawatthana said some Senate members agreed that they would approve the first reading of the charter amendment in principle in order to form a charter-drafting committee. He believed such an amendment could end the political crisis.

Senator Somchai Sawaengkarn said that apart from students, supporters of political parties were showing up at the anti-government demonstrations, so the PM, the constitution and monarchy were not the entire cause of the political conflict.

Leader of the Democrat Party Jurin Laksanawisit asked the government, opposition and Senate whips to urgently form a committee consisting of representatives of all sides to resolve the country's conflict in a constructive manner.

Leader of the Thai Liberal Party Sereepisuth Temeeyaves insisted Gen Prayut resign to make it easier for parliament to amend the charter. 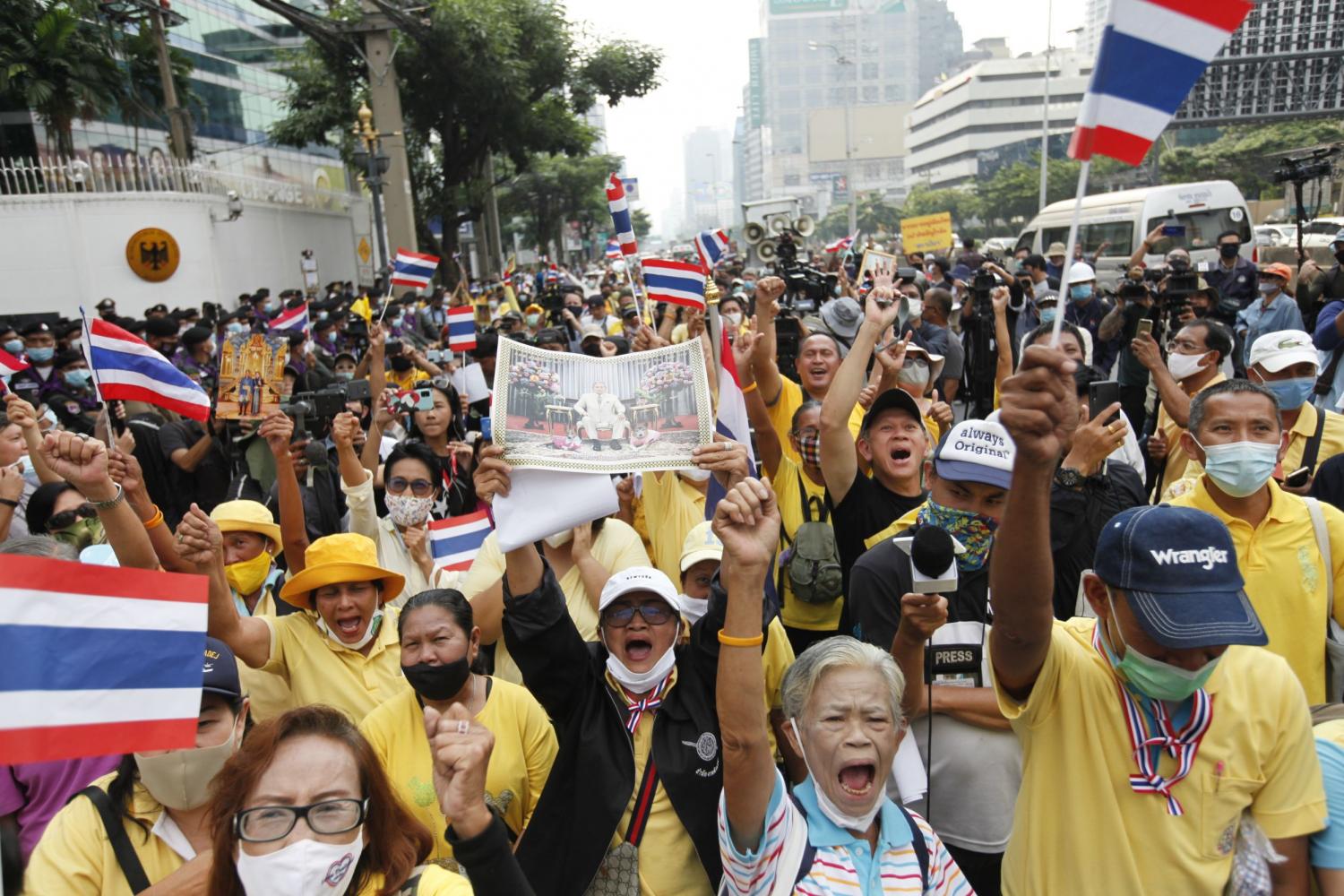 Royalists gather outside the Germany embassy on Sathon Road in the afternoon to submit a petition. The group left before the anti-government demonstrators showed up. photos by WICHAN CHAROENKIATPAKUL