The exterior of the house owned by the 1st Infantry Regiment, King's Guard, where Prime Minister Prayut Chan-o-cha and his family live. (Photo: Wassana Nanuam)

Prime Minister Prayut Chan-o-cha remains tight-lipped on the approaching ruling by the Constitutional Court on an opposition challenge to his continuing to live in an army house - a decision which could jeopardise his premiership.

The decision is scheduled for Dec 2, but the prime minister refuses to be drawn on the issue

"I am leaving that to the court," Gen Prayut said on Tuesday when asked about it.

The prime minister and his family reside in a house at the 1st Infantry Regiment, King's Guard, although he is no longer a member of the army's top brass, having retired after ending his career as army chief.

His use of the army residence was heavily criticised by the opposition bloc during the no-confidence debate in February.  Pheu Thai Party leader Sompong Amornvivat later asked the court to rule on the constitutional legality of the prime minister continuing to stay there. He also has an official residence.

Pheu Thai's main point for the court to rule on is whether Gen Prayut has a conflict of interest in staying in an army house, having retired from the military in 2014 after leading the coup. The state still had to bear the cost of all his public utility bills.

After the court completed the inquiry process, it announced on Nov 4 that it would rule on the petition on Dec 2 as "the case has sufficient grounds for a ruling".  (continues below) 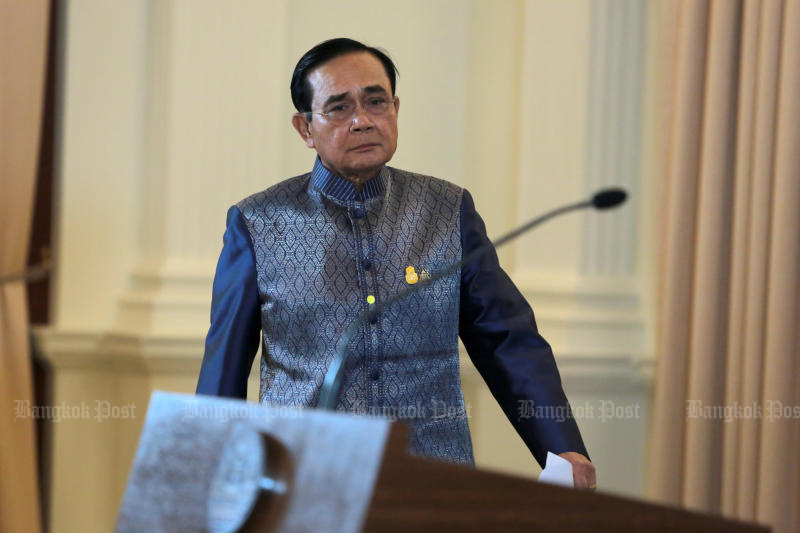 Prime Minister Prayut Chan-o-cha arrives at the podium for a press conference after a cabinet meeting at Government House on Tuesday. (Photo: Chanat Katanyu)

Gen Prayut may be forced to step down from office if the court rules in favour of the opposition petition.

The army has argued that the designation of the house where the prime minister lives was changed from an army welfare residence to a guesthouse in 2012.

It cited safety reasons for the prime minister needing to live behind the army barracks.