Police told not to interfere in major rally

Pointing the way: Student protester volunteers manage traffic at a busy 'Bad Student' rally on Rama I road in front of Siam Paragon on Saturday.

The Ratsadon group has threatened to escalate its activities if its members are dispersed by authorities on Wednesday, when they plan to march to the Crown Property Bureau in Bangkok.

Panupong Sritananuwat from the anti-government Dao Din group, an affiliate of the Ratsadon group, said at a rally in Khon Kaen on Saturday that the group disagreed with parliament's rejection of a charter amendment bill submitted by the Internet Dialogue on Law Reform, better known as iLaw.

The bill, dubbed "the people's constitution", has the backing of the anti-government protesters and almost 100,000 people who signed up to support it.

Mr Panupong said Dao Din would carry on educating the public about iLaw's charter draft and confirmed the group would take part in Wednesday's major anti-government demonstration in Bangkok.

He denounced the government's use of force to crack down on the Nov 17 demonstration in front of parliament and vowed to intensify Dao Din's activities, especially in Khon Kaen province.

The group's rally on Saturday ended quickly and peacefully amid tight security by officers from the Khon Kaen provincial police.

The Khon Kaen branch of Ratsadon also gathered at Ratchadanusorn Park in Muang district and vowed to continue to protest until Prime Minister Prayut Chan-o-cha resigned and the charter was amended. 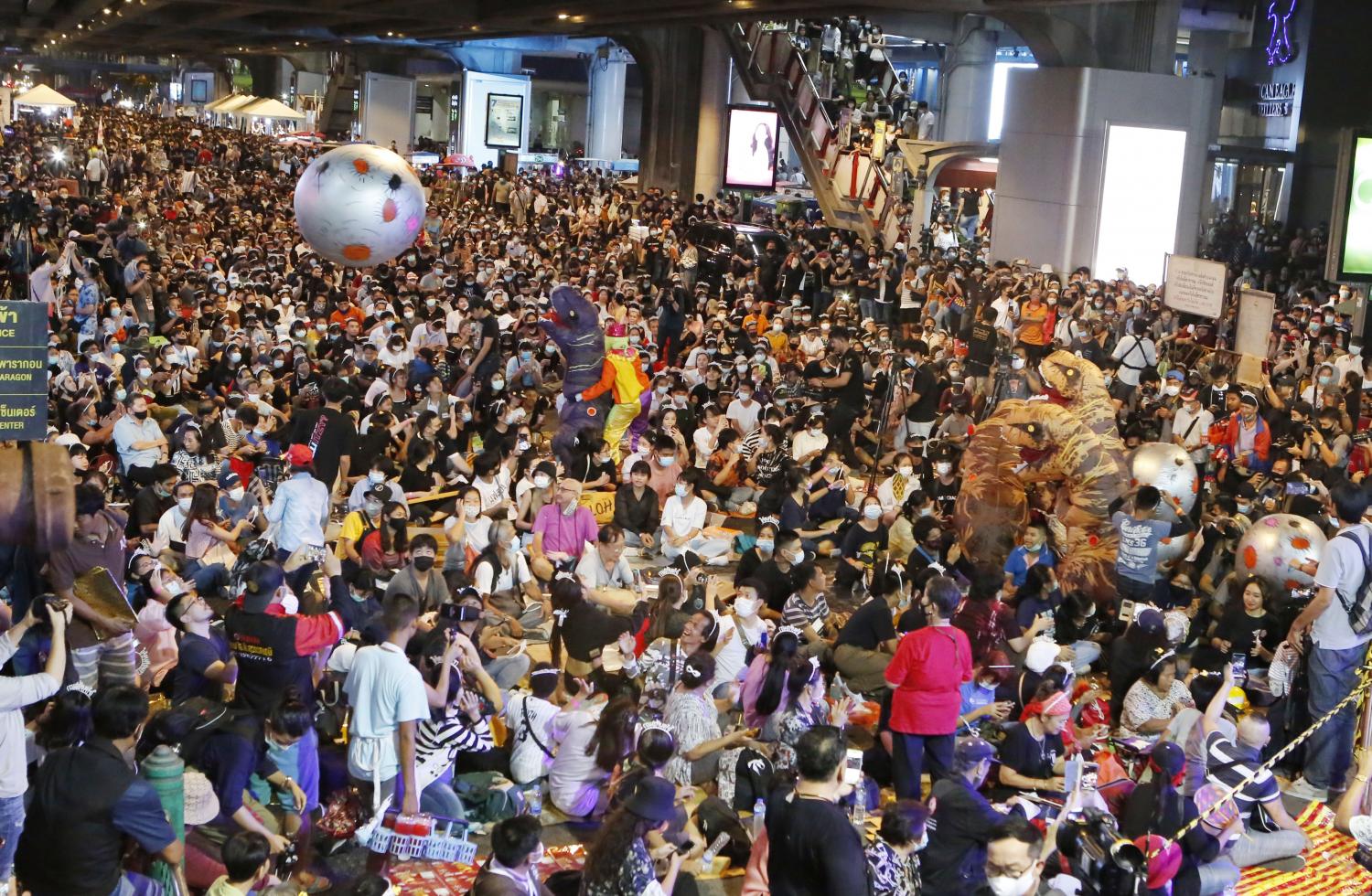 Costume drama: Protesters wearing dinosaur costumes line up at a Bad Student rally at Siam BTS station on Saturday. In keeping with the "Bye bye dinosaurs" theme, participants dressed in dinosaur costumes were pelted by inflatable meteorites launched at them from the crowd.

Meanwhile, young "Bad Student" activists gathered on Saturday beneath the Siam BTS skytrain station, a day after it was revealed that two of their teenage leaders were facing charges for taking part in pro-democracy protests.

The theme of the event was "#Bye bye dinosaurs" (old-guard politicians) and in keeping with that, some protesters dressed in dinosaur costumes and were pelted by inflatable meteorites launched at them from the crowd.

Deputy police spokesman Pol Col Kissana Phathanacharoen said the Bad Student group was given permission to demonstrate, but strictly prohibited from moving to other locations.

Police would also not tolerate protesters using signs with words that caused hatred and division in society, he said.