Pro-democracy protesters took over the Bang Na intersection on Saturday evening in one of two rallies staged on the outskirts of Bangkok.

Activists also gathered outside the provincial hall in Nonthaburi for a second straight evening of protests, following an event that drew about 5,000 people to the Lat Phrao intersection in Bangkok on Friday.

The youth-led movement plans to be back in action again on Sunday. The United Front of Thammasat and Demonstration posted a message on its Facebook page asking supporters to gather at 3pm outside the 1st Infantry Battalion, 1st King’s Own Bodyguard Regiment, in Phaya Thai district, to disarm “Thai feudalism’’.

Another rally is also scheduled to take place at the Imperial Lat Phrao shopping mall.

The “Mass gathering to seize Bang Na”, as it was billed, started out in front of the Imperial World shopping mall in Samrong district of Samui Prakan at 4pm on Saturday.

Young people were joined by labourers and other supporters in calling for the resignation of Prime Minister Prayut Chan-o-cha, a new constitution and reform of the monarchy — the three core demands of the protesters who have been rallying regularly since July.

The group began marching to Bang Na intersection around 6.20pm. Rally guards walked arm in arm between demonstrators and a convoy of motorcyclists joined the crowd. Some protesters sprayed paint on a police booth with a message “Police abandon people”.

The group arrived at the Bearing BTS stain at around 6.40pm. A protester spray-painted the message “Dictators’ servants” on a traffic control booth at the Lasalle intersection.

When the demonstrators arrived at the Bang Na intersection around 7pm, they were greeted by other supporters who were waiting in the area.

Pol Maj Gen Piya Tawichai, deputy chief of the Metropolitan Police Bureau, said the demonstrators had not sought permission for the gathering in Samrong or at Bang Na.

Since the rallies lacked permission, organisers would have to end the gathering by the time the police asked them to, said Pol Col Kissana Phathanacharoen, deputy spokesman for the national police. As usual, the police request was ignored.

The law on public gatherings doesn’t prohibit gatherings but is aimed at ensuring they are peaceful, he said.

In Nonthaburi, activist Shinawat “Bright” Chankrachang led a few hundred people to the provincial hall, where participants listened to music and brandished the yellow inflatable ducks that have become a symbol of the movement.

“We have had too many years of corrupt dictatorship. We want an election in which our voices are really heard,” a 24-year-old recent graduate, who gave only her nickname “A”, told Reuters.

Political tensions are expected to remain high into the coming week. The Constitutional Court is scheduled to rule on Wednesday whether Gen Prayut has obtained illegal benefits by continuing to live in an army-owned house even though he retired five years ago. A ruling against him could force him to resign. 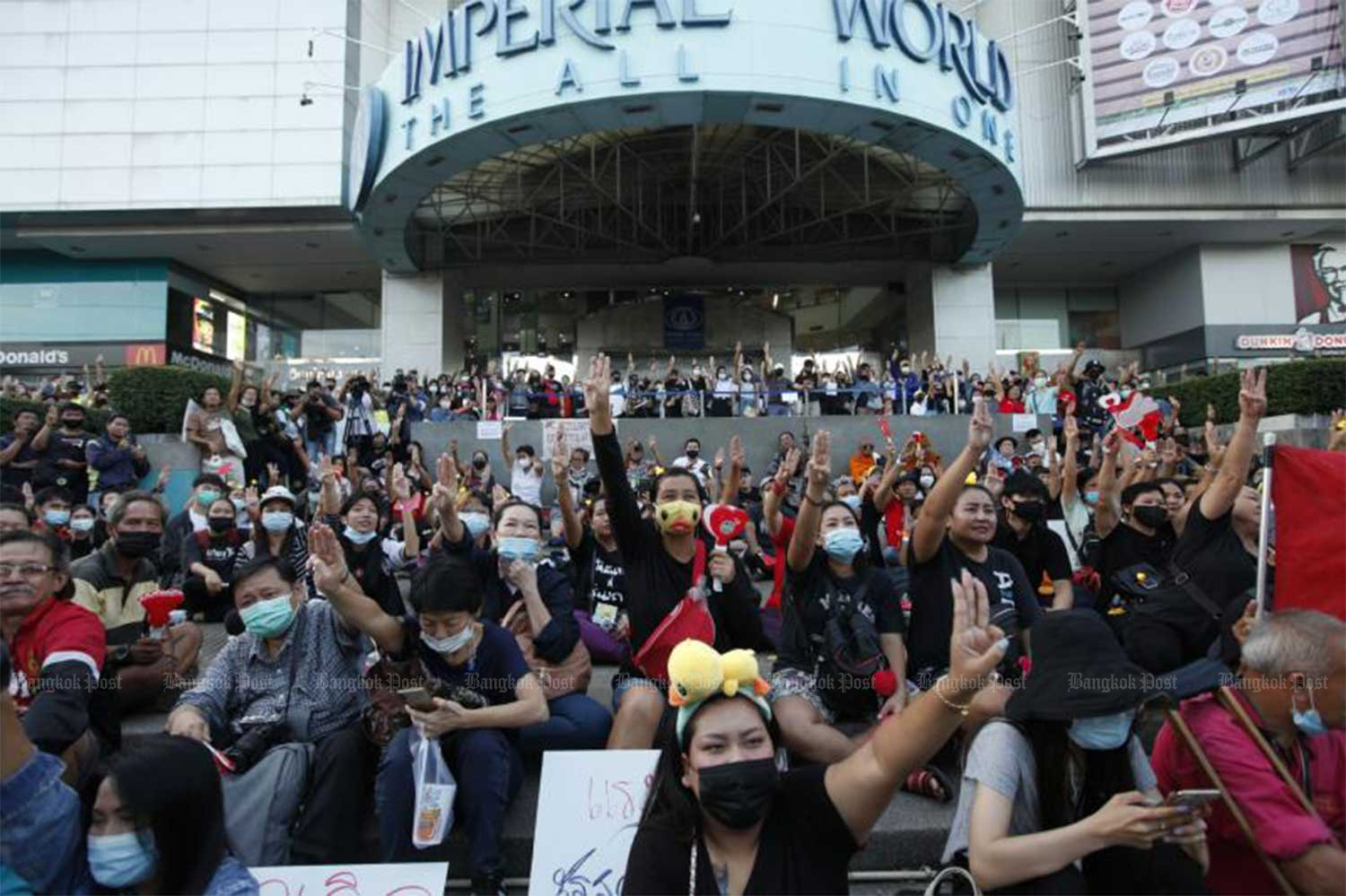 The manufacturing production index in December dropped a more than expected 2.44% from a year earlier, according to figures released by the Industry Ministry on Wednesday.

NAKHON PHANOM: Soldiers arrested one man and seized 74,000 methamphetamine pills and a kilogramme of crystal methamphetamine that had been smuggled across the Mekong river from Laos, in Tha Uthen district on Tuesday night.

GINGINS, Switzerland: Switzerland and France are in a snowball fight over a cross-border car park which serves Swiss ski slopes but has been closed by the French due to the coronavirus pandemic.