Arnon says protests will only intensify

Prime Minister Prayut Chan-o-cha smiles amid supporters who take a group photo with him during his visit to Samut Songkhram on Wednesday. (Photo by Wichan Charoenkiatpakul)

The Constitutional Court's unanimous vote to clear Prime Minister Prayut Chan-o-cha of a conflict of interest in staying in an army house after his retirement has sparked outrage among anti-government protesters.

The protesters, who returned to Lat Phrao intersection in a mass gathering on Wednesday to hear the ruling, have threatened to intensify their rallies.

Somyot Prueksakasemsuk, leader of the June 24 Democracy Group, spoke to the crowd, saying nothing was illegal from now on. He added the ruling was not a surprise.

"The people will stop Prayut. It won't be long until he is out of office.

"People will rise up and end this vicious cycle that keeps Prayut in power," Mr Somyot said.

Arnon Nampa, another protest co-leader, told the crowd that calls will be made to reform the judiciary.

A new precedent had been set, he added, as an unqualified person remaining in a state-owned house free of charge, which works to the benefit of the occupant, would not contradict the law or regulations.

"Thanks to Gen Prayut, this new principle will be adopted regardless of the law," he said.

"Next year, the protests will grow in intensity even more," he told the rally.

Panupong "Mike" Jadnok, a Ratsadon anti-government leader, also spoke to the protesters, saying the protests have been galvanised and they would continue with even more energy. 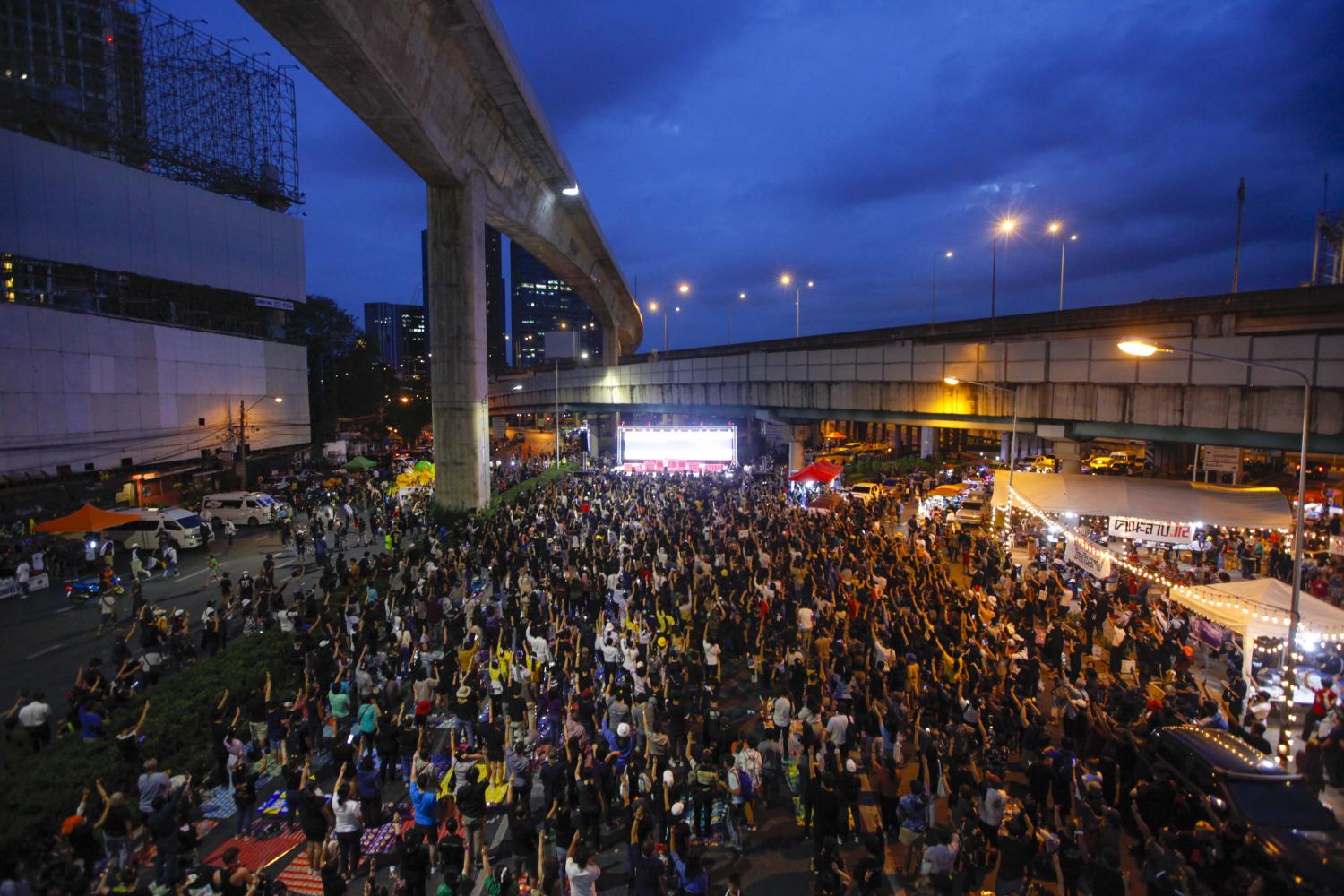 Anti-government protesters converge at the Lat Phrao intersection after the ruling on Gen Prayut was delivered.  (Photo by Pattarapong Chatpattarasill)

Unlike Gen Prayut, Samak did not survive the Constitutional Court ruling over a cooking show he was found guilty of hosting while he held the post of prime minister.

In September 2008, the court stripped Samak of his premiership for violating the constitution for accepting payments to host the cooking show on TV.

Mr Shinawat said he has lost faith in Thailand's justice system and insisted there could be no unity without justice.

Chaithawat Tulathon, secretary-general of Move Forward Party (MFP), said injustices have ensued since the May 2014 coup despite desperate calls for justice and democracy to be restored.

"We still think Gen Prayut should resign to douse this fire [of political conflict] and create more trust," he said.

On Wednesday, all nine Constitutional Court judges found Gen Prayut not guilty for staying in an army residence while in his role as prime minister. 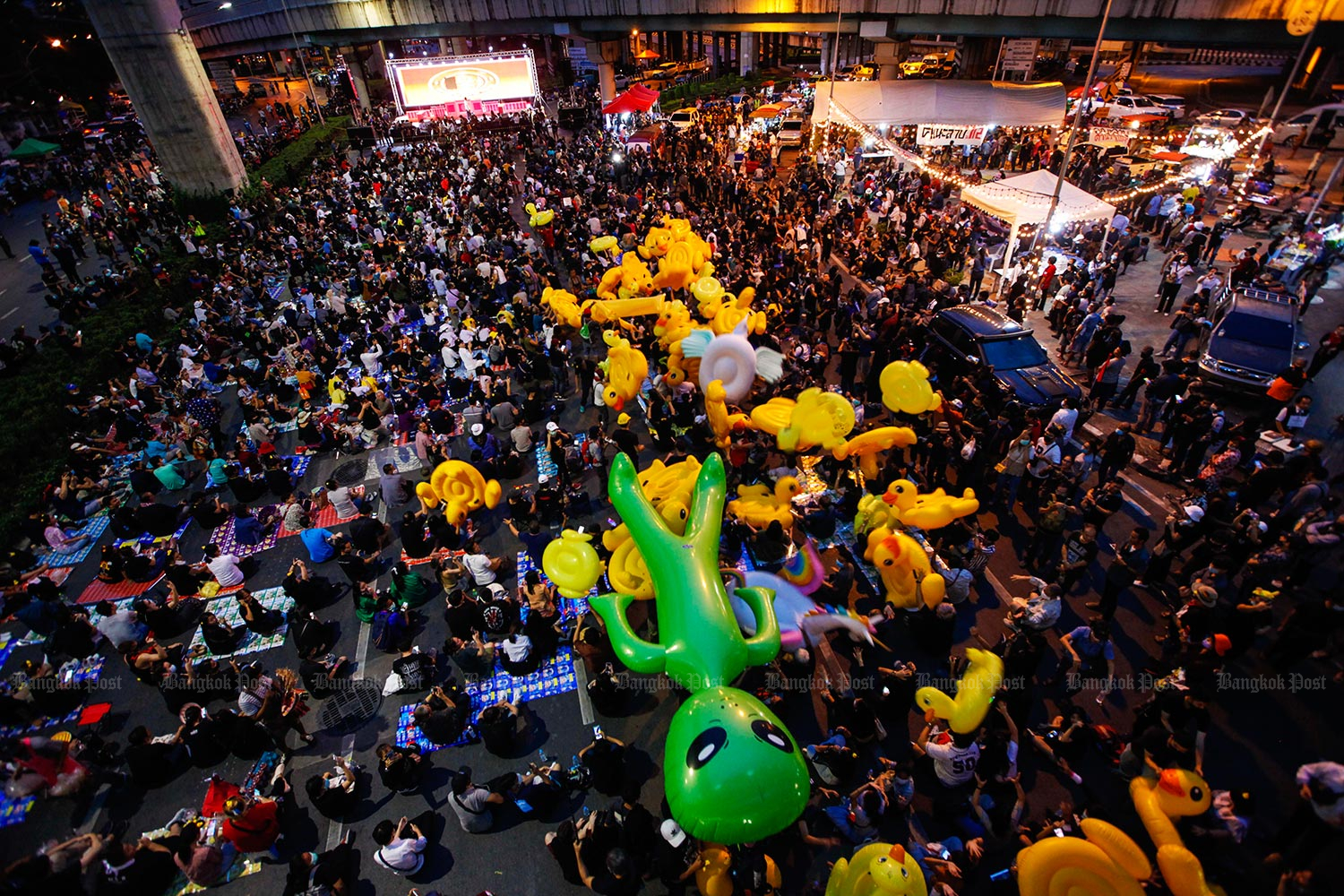 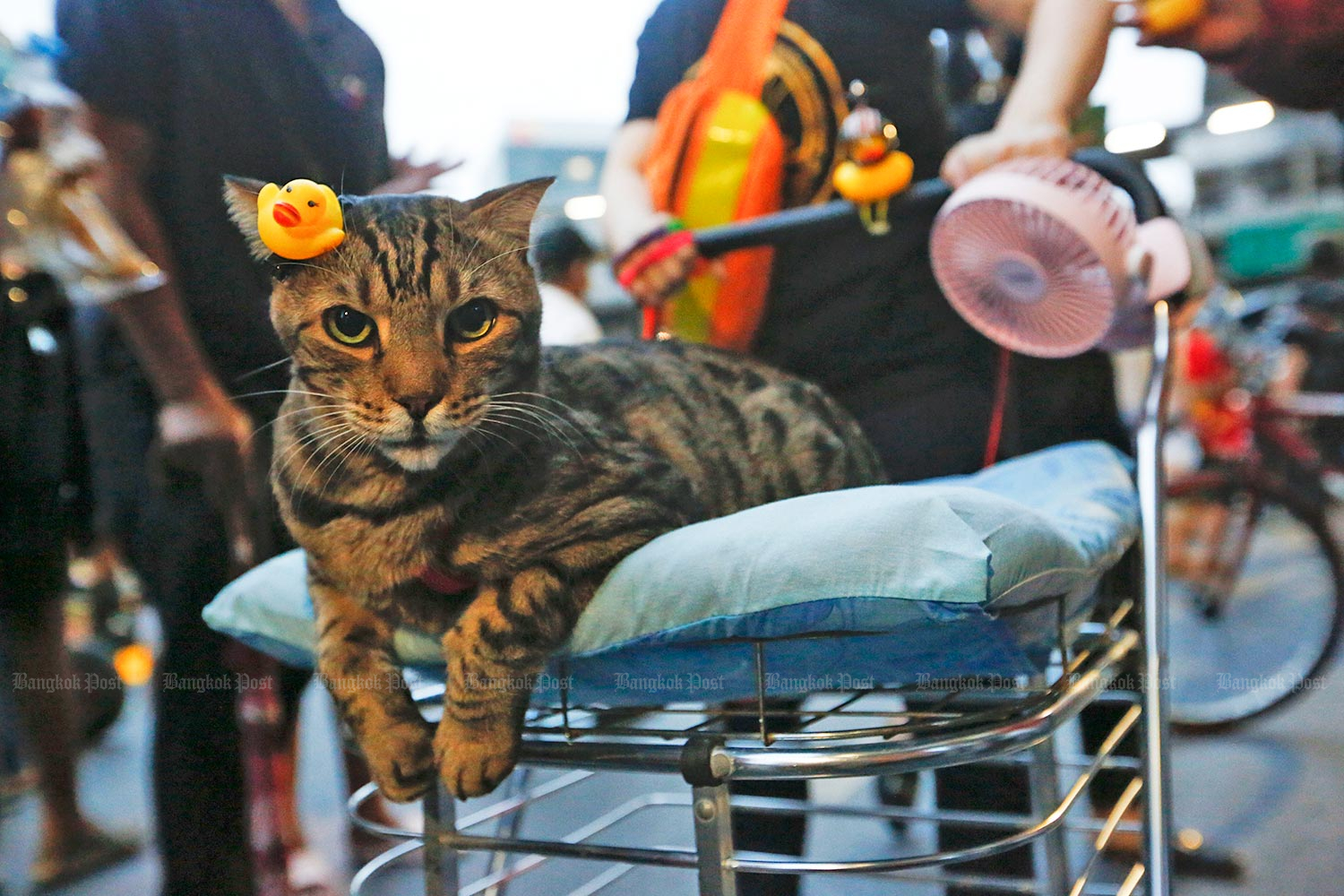 A cat at the anti-government rally site carries a miniature yellow rubber duck, a symbol of the protest. (Photo by Arnun Chonmahatrakool) 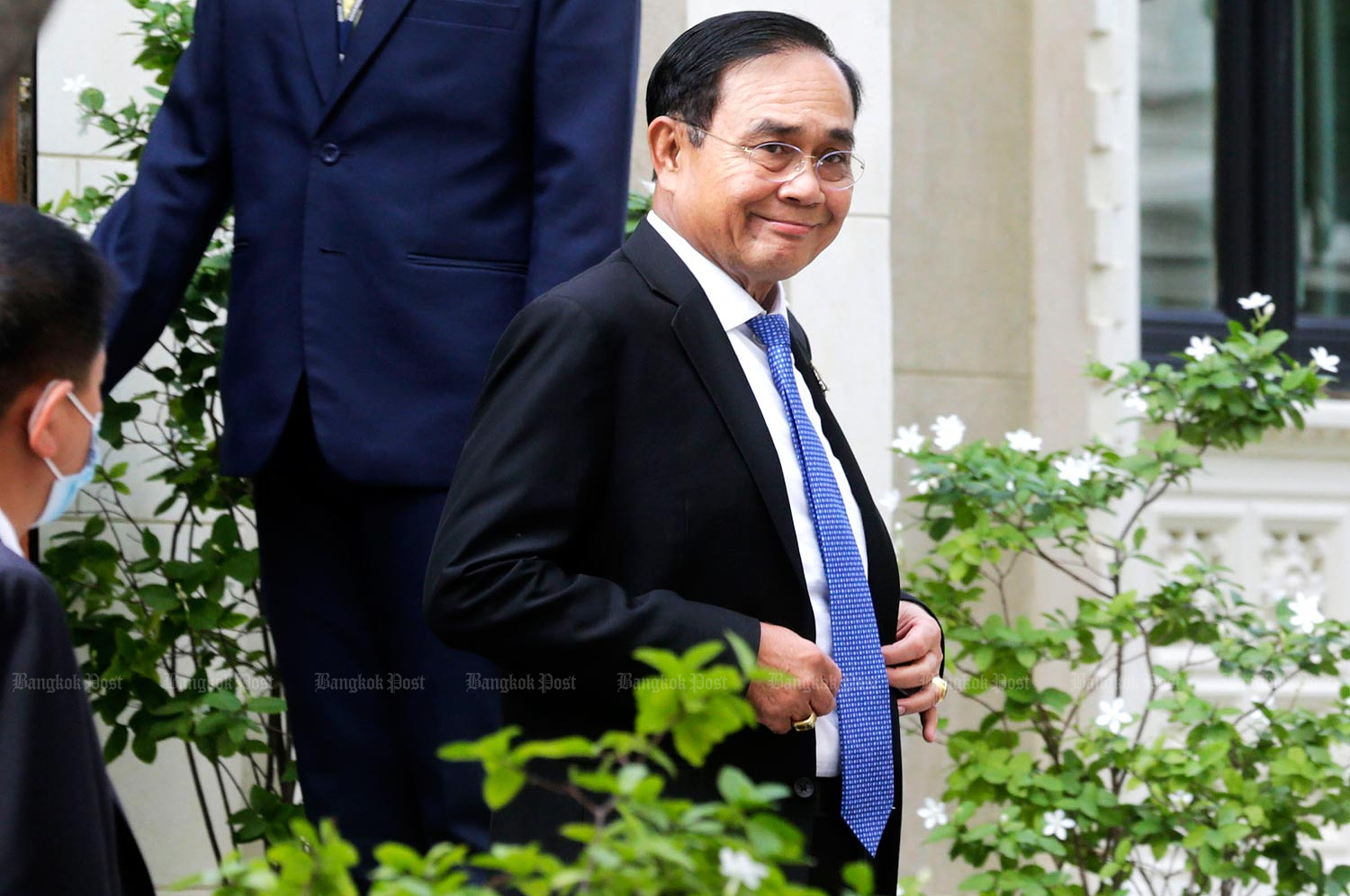 Prime Minister Prayut Chan-o-cha is all smiles at Government House after the court found it was legal for him to occupy an army house. (Photo by Pornprom Satrabhaya) 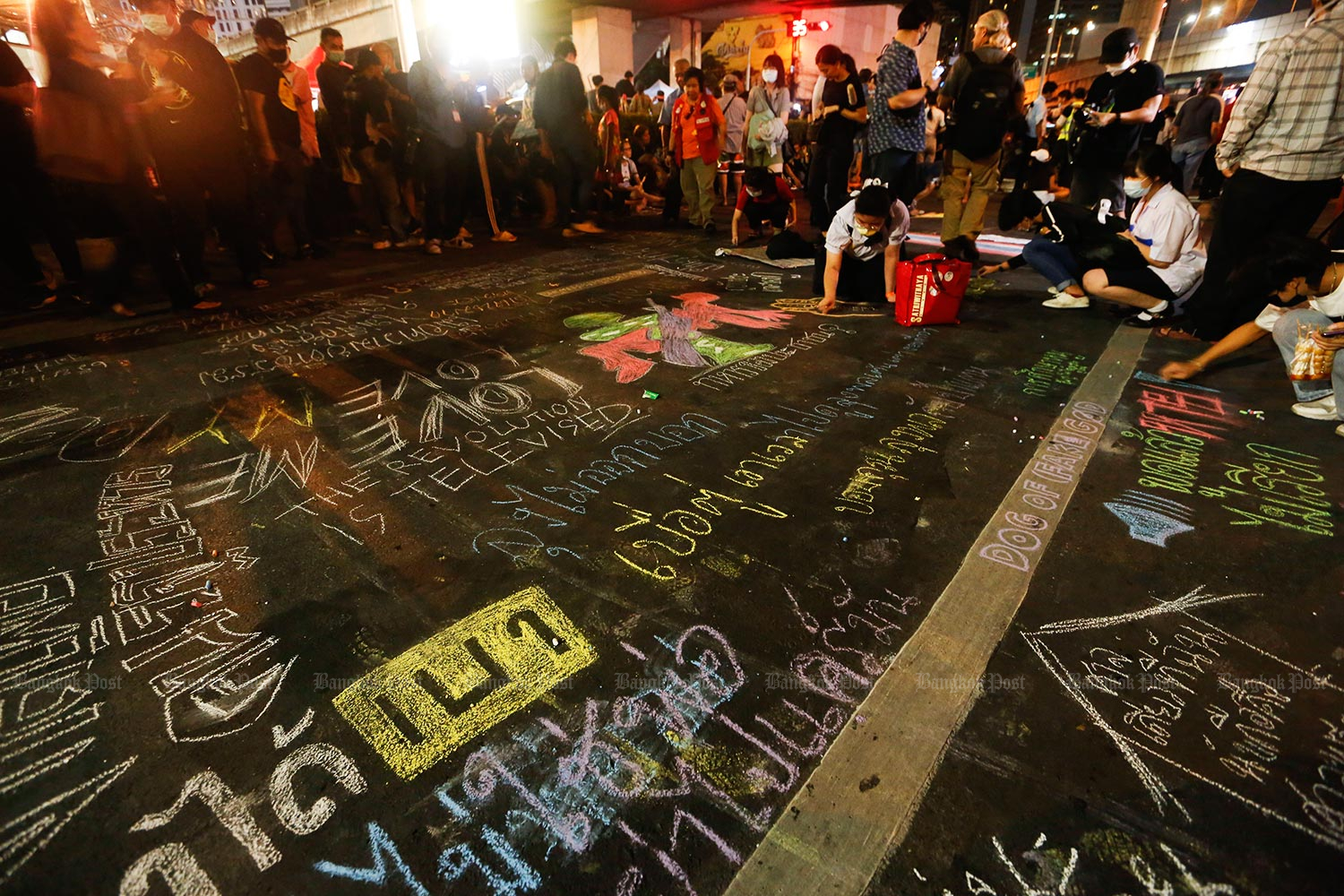 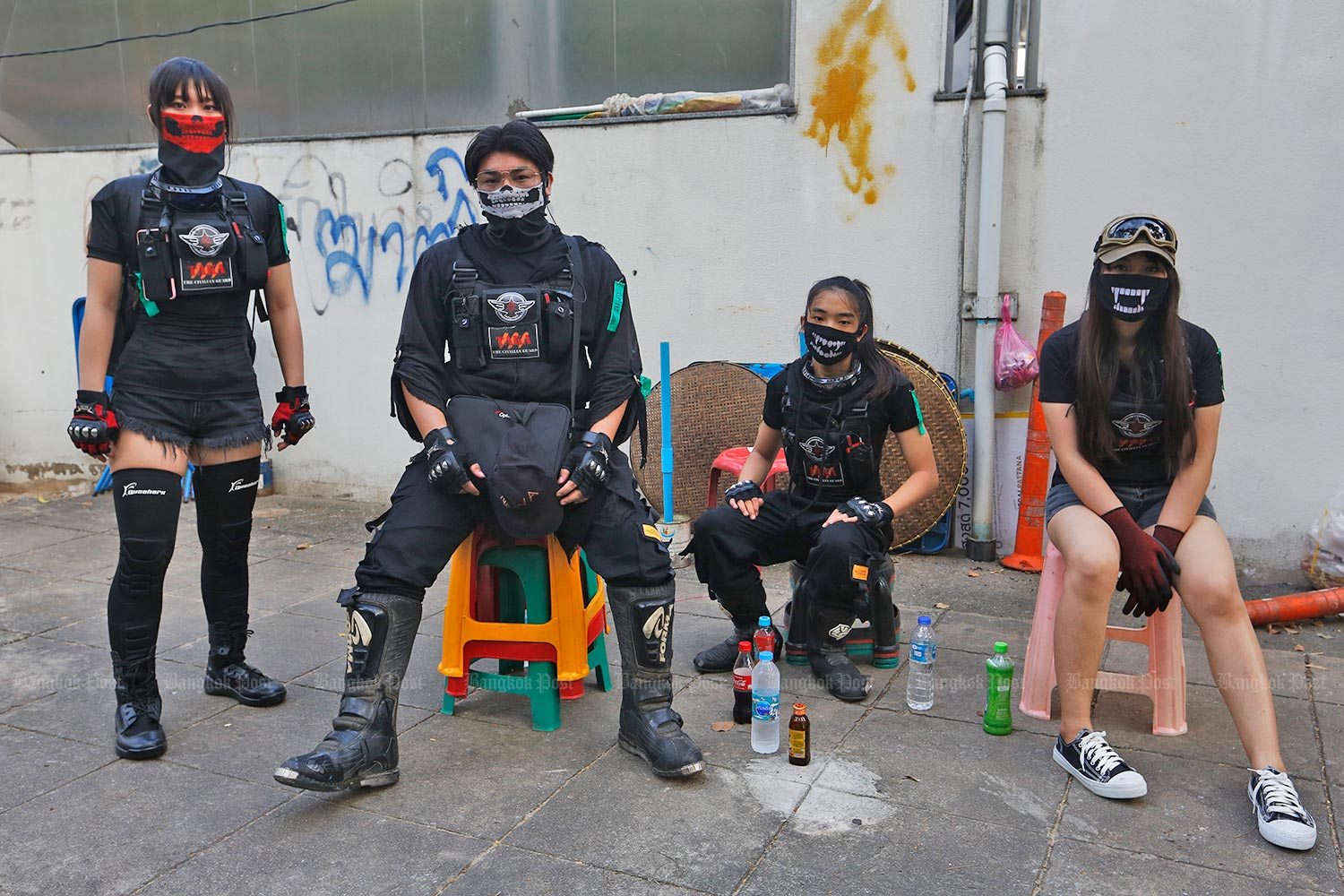 Some of the protesters don black clothes. (Photo by Arnun Chonmahatrakool)

His occupancy was allowed under a 2005 army regulation, which lets army chiefs stay on base after they retire if they continue to serve the country well, according to the unanimous ruling read out at the court.

The court said the regulation had come into effect before Gen Prayut was the army chief, and other former army commanders have also received the same benefits.

The court said Gen Prayut served the country well as army chief, and the army regulation allowed its former commanders to use such houses, along with subsidising utility bills.

Gen Prayut has stayed at the military house at the 1st Infantry Regiment on Phahon Yothin Road in Bangkok since shortly after he became army commander-in-chief in 2010, according to the army.

"When he became prime minister on Aug 24, 2014, Gen Prayut was also the army chief on active duty. He was therefore qualified to stay in the house in his capacity as the army chief.

"A prime minister who had not been an army chief could not have stayed at the house," the court said in its ruling.

Meanwhile, Prasert Chanthararuangthong, secretary-general of the main opposition Pheu Thai Party which sought the court ruling in the case, said the judgement may not have explained all the queries raised in the complaint against Gen Prayut which was submitted to the court.

No further details were available, and Gen Prayut had yet to respond last night.