Women on frontlines of democracy movement

On the protest frontlines, they are urging for gender equality in a kingdom where workplaces and politics are still dominated by men.

AFP met three of them.

On the night police tried to stop protesters from marching to the parliament, activist Chonticha Jangrew remembers rallying them to push past the barricades.

"We cut the barbed wire, we approach the parliament as close as we can. We won't back down," she recounts herself saying during the November rally.

Moments later, police fired tear gas and water cannon at the marchers -- a turning point for a movement that has brought thousands onto the streets since July.

Ms Chonticha, 27, is a familiar face at demonstrations and is often the only one trusted to negotiate with police, but her visibility has also led to a spate of criminal charges -- including sedition.

She said she received death threats and "sexual insults" from ultra-royalists who oppose the protest movement but insisted the struggle must continue.

"We must do as much as men if we want equality," she said.

Like the majority of protesters, she is demanding the resignation of Prime Minister Prayut Chan-o-cha, reform to the monarchy and a rewriting of the military-scripted constitution.

She is also fighting for better representation of women in politics -- so far, they make up only 14% of lawmakers in parliament and 10% of the cabinet.

Ms Chonticha was raised by a military father in a conservative environment.

"I needed to emancipate myself. Today, I don't hide my opinions from my family. They accept them, but they are afraid for me," she said. 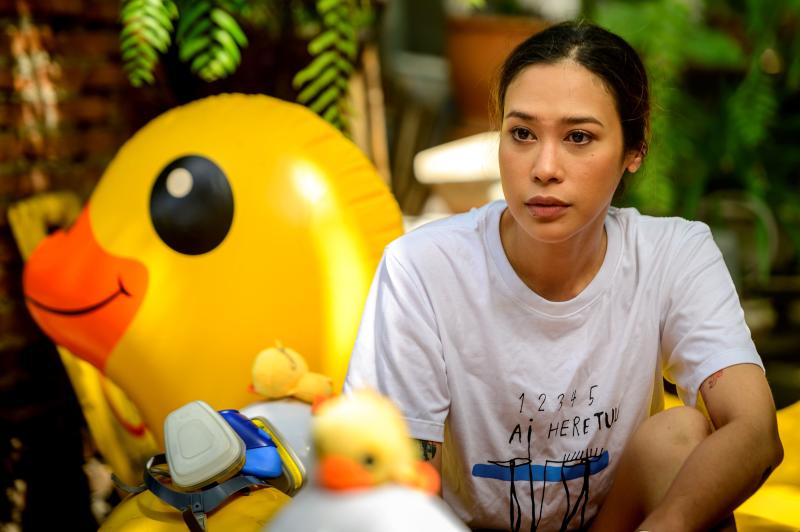 Actress Intira "Sai" Charoenpura sits on an inflatable duck, associated with the pro-democracy movement, at her home in Bangkok on Dec 7, 2020. (AFP photo)

A star of Thailand's silver screen since her teenage years, Inthira Charoenpura -- better known by her nickname "Sai" -- says she has had movie contracts cancelled since joining the protests.

"In show business, nobody dares to talk about politics for fear of ruining their career," she says.

She faces criminal charges for allegedly insulting the monarchy under the country’s tough royal defamation laws.

The 40-year-old actress has nearly half a million fans on social media and is one of the few celebrities in Thailand to publicly acknowledge her financial support for the movement, earning her the moniker "Sugar Mama" from young protesters.

She collects donations and distributes meals, helmets, gas masks and inflatable ducks -- which have emerged as a symbol for the movement.

"The demonstrators are so courageous. In our country, protest movements often end in deaths," she says, referring to civil unrest in 2010 that ended in a bloody crackdown.

The protests today have been largely peaceful, with young students coming together demand social change -- including an end to sexual harassment and gender discrimination.

"Women in the protests dare to talk about what they are going through as victims," says Ms Sai.

Born to a director father and film producer mother, Ms Sai considers this year's protests one of the most worthwhile causes she has supported.

"We cannot yet speak of victory, but there is an irreversible change," she says. "This fight is even more important than the cinema that flows through my veins." 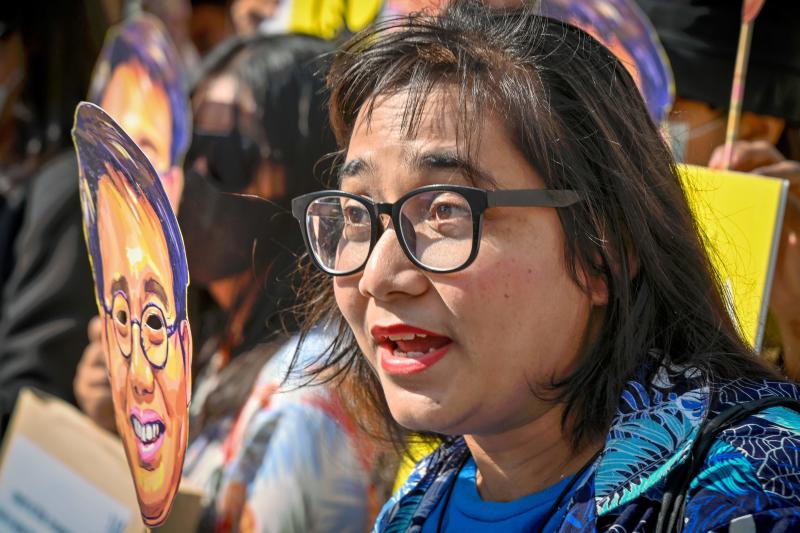 Chumaporn Taengkliang, co-founder of Women for Freedom and Democracy, is pictured during a protest rally in front of the Cambodian embassy in Bangkok on Dec 3, 2020. (AFP file photo)

Chumaporn Taengkliang, known as "Dao", once smuggled 10,000 abortion pills from China into the kingdom, where the drugs were not widely available.

Seven years later she is a frequent presence at protests calling for the decriminalisation of abortion and the legalisation of sex work.

Abortion is legal in Thailand but restricted, except in specific cases such as rape or when the woman's health is threatened -- otherwise women can be prosecuted and jailed for three years.

"It's archaic," says Ms Dao, who welcomes recent news that the government is working on decriminalising abortion even though "we have to go much further to really protect women."

Ms Dao grew up in Thailand's south to a conservative family where domestic violence was normal, and knew from the age of 12 that she "had to fight against all this".

She urges other pro-democracy leaders, many of them men: "Let us make ourselves heard more. We will never stay in the back seat again, we will always be in the front line."