Pro-democracy groups have vowed to intensify their protests calling for monarchy reform and a new constitution, a day after a Bangkok court sent four of their leaders into pretrial detention on royal defamation charges.

Activists will gather at Pathumwan intersection for a second day to demand the immediate release of leaders and warn the refusal of bail is a sign authorities are adopting a confrontational stance, one of the key protest leaders, Panusaya "Rung" Sithijirawattanakul said on Wednesday.

The Criminal Court on Tuesday denied bail to lawyer Anon Nampa, student leader Parit "Penguin" Chiwarak and two others accused of breaking Thailand’s lese majeste law. The detained leaders are among activists who have spearheaded a movement that’s broken long-held taboos about publicly discussing and questioning the monarchy.

More frequent protests will pile pressure on Prime Minister Prayut Chan-o-cha’s government, which is facing a no-confidence vote next week and battling a slump in the trade- and tourism-reliant economy. While political analysts expect the authorities to charge more activists in the coming days under the lese majeste act to weaken the protest movement, Gen Prayut has said the government is merely enforcing existing laws.

Thailand’s lese majeste law is one of the harshest in the world, mandating as many as 15 years in prison for each instance of defaming, insulting or threatening the king, queen, heir apparent or regent. Since late November, the authorities have charged at least 58 activists who have led demonstrations and called for a review of monarchy’s powers.

The Bureau of the Royal Household has said it doesn’t give comments to the press. Gen Prayut said on Wednesday Thai people should help one another and learn from protests in the past when asked about today’s planned gathering.

The movement that started mid-2020 is demanding constitutional reforms and the resignation of Gen Prayut, who ruled the country as junta leader for five years before becoming premier after 2019 elections. While street rallies had become less frequent since mid-December due to the country’s fresh wave of Covid-19 infections, public demonstrations will now resume, Ms Panusaya said.

“The court’s refusal to allow our friends to get bail is a sign that there’s no compromise” Ms Panasuya said. “So we now have to come out and show our strength and tell them that we won’t stop with our demands.” 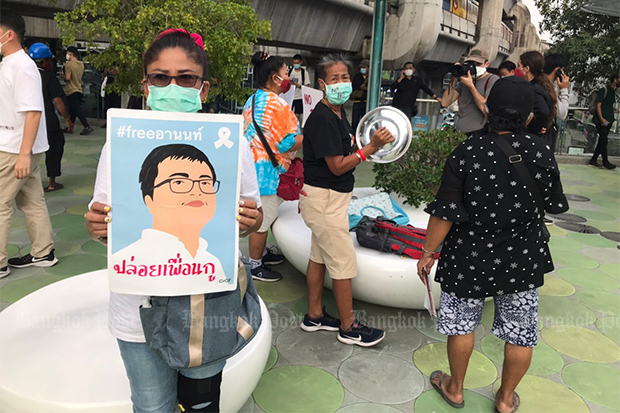 Human Rights Watch expressed concern about the increasing use of lese majeste laws against pro-democracy activists and said the detained leaders may spend years in jail without trial.

“Holding people in pretrial detention for peaceful expression portends a return to the dark days when people simply charged with this crime end up spending years in jail while their trials drag on interminably,” Brad Adams, Human Rights Watch’s Asia director said in a statement Wednesday. “The Thai government should address the demands of critics and protesters instead of putting them in jail for long periods before they are tried on flimsy charges.”

Freedom and democracy have disappeared in Hong Kong, Taiwan's premier said Friday, as Chinese leader Xi Jinping visited the business hub to celebrate the 25th anniversary of its handover from Britain.

3M to exit Neoplast, Neobun brands in Thailand, some other SE Asain countries

Industrial conglomerate 3M Co said on Friday it will exit its Neoplast and Neobun brands in Thailand and some other Southeast Asian countries, and sell manufacturing assets at its Lat Lum Kaeo plant, as part of its strategic portfolio management.

Tourism back to life in Songkhla after Thailand Pass scrapped