Police and protesters face off again

A protester lies on the ground after witnesses said he was beaten by police near Sanam Luang on Saturday night. (Reuters Photo)

A confrontation between police and pro-democracy protesters turned ugly late Saturday with a number of injuries and arrests, following a peaceful protest earlier in the day at Democracy Monument in Bangkok.

Tensions had been high all evening but most rally participants had dispersed peacefully, with a promise to stage another rally next Saturday, when a showdown between a small group of demonstrators and police turned violent.

One video that was widely circulated online showed officers in full riot gear chasing down a man wearing what appeared to be a yellow volunteer medic vest, with at least one officer beating him with a truncheon as he fell to the ground. His condition was not known.

Numerous loud noises were heard, believed to be from homemade explosive devices and firecrackers. Police said later that as many as 20 officers had been injured and seven demonstrators arrested and taken to the Chana Songkhram station.

The clash came after an earlier standoff at the City Pillar Shrine, to which the demonstrators had walked after their afternoon gathering at Democracy Monument. Eyewitnesses reported bottles being thrown and smoke filling the air, a lot of it from fireworks. Three people were reported injured, including a journalist said to have been struck by a smoke grenade. It was not clear who threw the projectile.

Riot police formed a barier near Sanam Luang and two water cannon trucks were also moved into the area. They were not used.

At 8pm, the protesters — some of them carrying their own police-style riot shields — asked police to turn off lights on their crowd-control vehicles but their demand was not met. Guards moved to the front line and clashed with police, who later asked them to negotiate.

Finally, the police agreed to turn down the lights and to allow a small ceremony to be held.

Attapol “Kru Yai” Buapat, another key protester from Khon Kaen province, represented the demonstrators in paying respects inside the shrine. He emerged a few minutes later.

“I paid respects to the shrine, praying for it to protect Ratsadon [citizens] in fighting for the right that should have been theirs. We will return on Feb 20 to demand the release of our friends,” he said. (Story continues below) 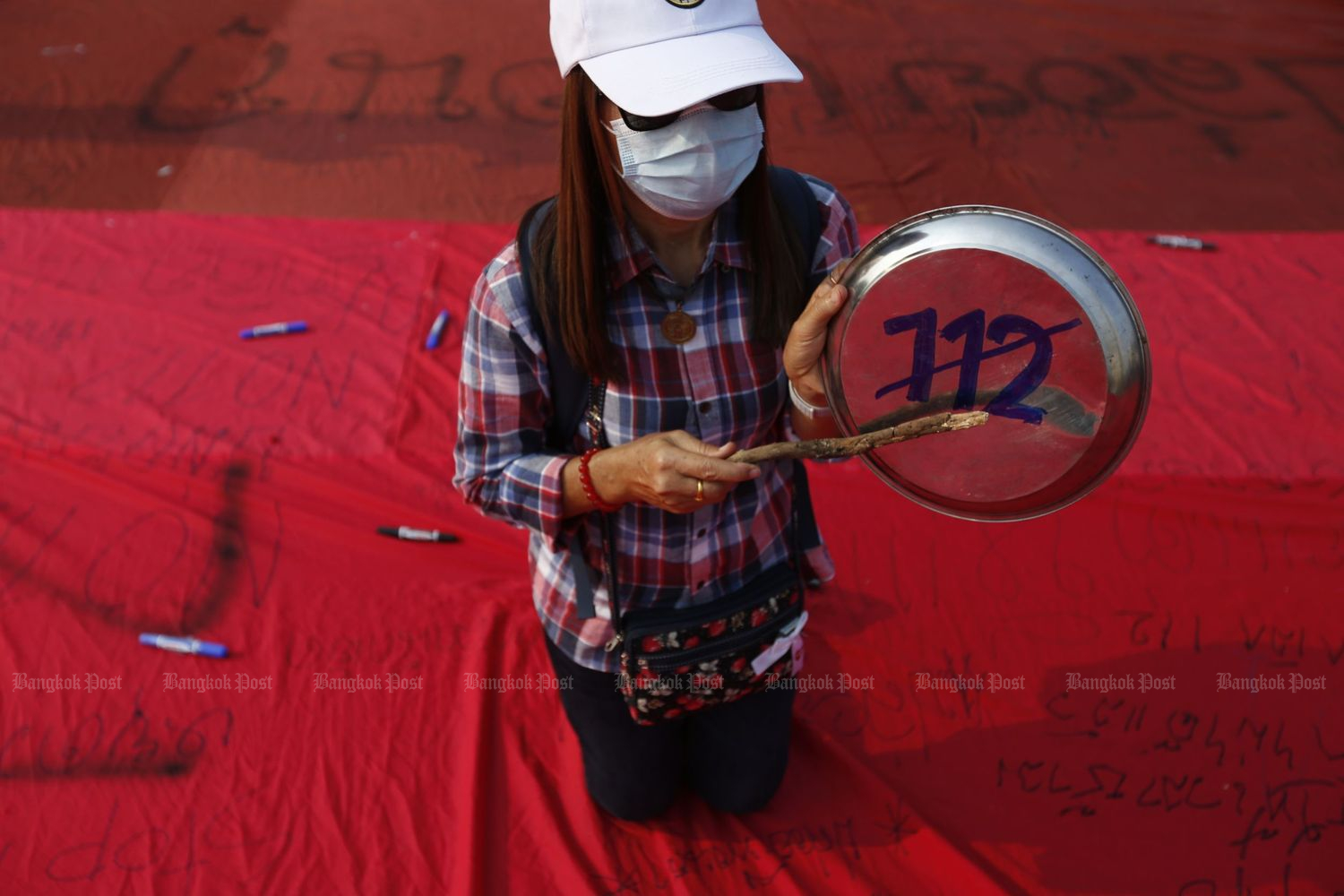 A woman bangs on a pan to vent displeasure with the use of royal defamation law.

The gathering that began around 3pm at Democracy Monument was staged to demand the abolition of the royal defamation law and the release from detention of four key members of the movement.

The protest “Counting one to million … Returning Power to People” attracted a few hundred people.

Activist Panupong “Mike” Jadnok, a key member of the Ratsadon group, vowed not to back down if there were any attempts to break up the rally.

“Now is not the time to fear, to step back. We will only fight today — there will not be an order to retreat from me,” he said.

“Whoever wants to be on the frontline, let’s be prepared. If anything happens, let state officers start first so we will not lose our legitimacy in our push for democracy.”

Pol Col Thotsaphol Ampaipipatkul, chief of the Samran Rat police station, used loudspeakers to ask demonstrators to stop the gathering as it was in violation of the emergency decree and the disease control law.

His announcement was met with boos and the beating of pots and pans by protesters, a tactic borrowed from anti-coup demonstrators in Myanmar, who believe it helps chase away evil spirits.

The four were denied bail during a pre-trial hearing on Feb 9 after prosecutors formally indicted them on charges of lese majeste and other lesser charges. The court cited as reasons the severe punishment of the charges and the tendency of the accused to repeat the offences.

Their supporters argued that the court’s rationale ran counter to the principle of “presumed innocent”, and assumed the four are guilty as charged even before the trial begins, which could ne months from now.

Surrounded by hundreds of police including a bomb squad, the demonstrators on Saturday afternoon removed hundreds of plant pots neatly put there last week by City Hall, supposedly to prevent people from assembling there.

Some of the pots were then used to form the number “112”, along with coconut shells from several provinces.

For the progressive movement, coconut shells symbolise a lack of perspective among conservatives, who feel content with the status quo regardless of progressive values and developments elsewhere in the world.

It stems from a Thai saying about a frog who has lived under a coconut shell for so long that he thinks it is perfectly fine and comfortable and doesn’t want it lifted ever, simply because he isn’t aware what’s going on outside his shell.

The highlight activity was a 30mx30m red banner on which participants are asked to write their thoughts about the government and the country.

The banner was then hoisted up and wrapped around the monument.

Most of the messages on the banner were about problems involving Section 112 of the Criminal Code, the demand that their friends be released, and the economic hardships they were facing in the wake of the Covid pandemic. 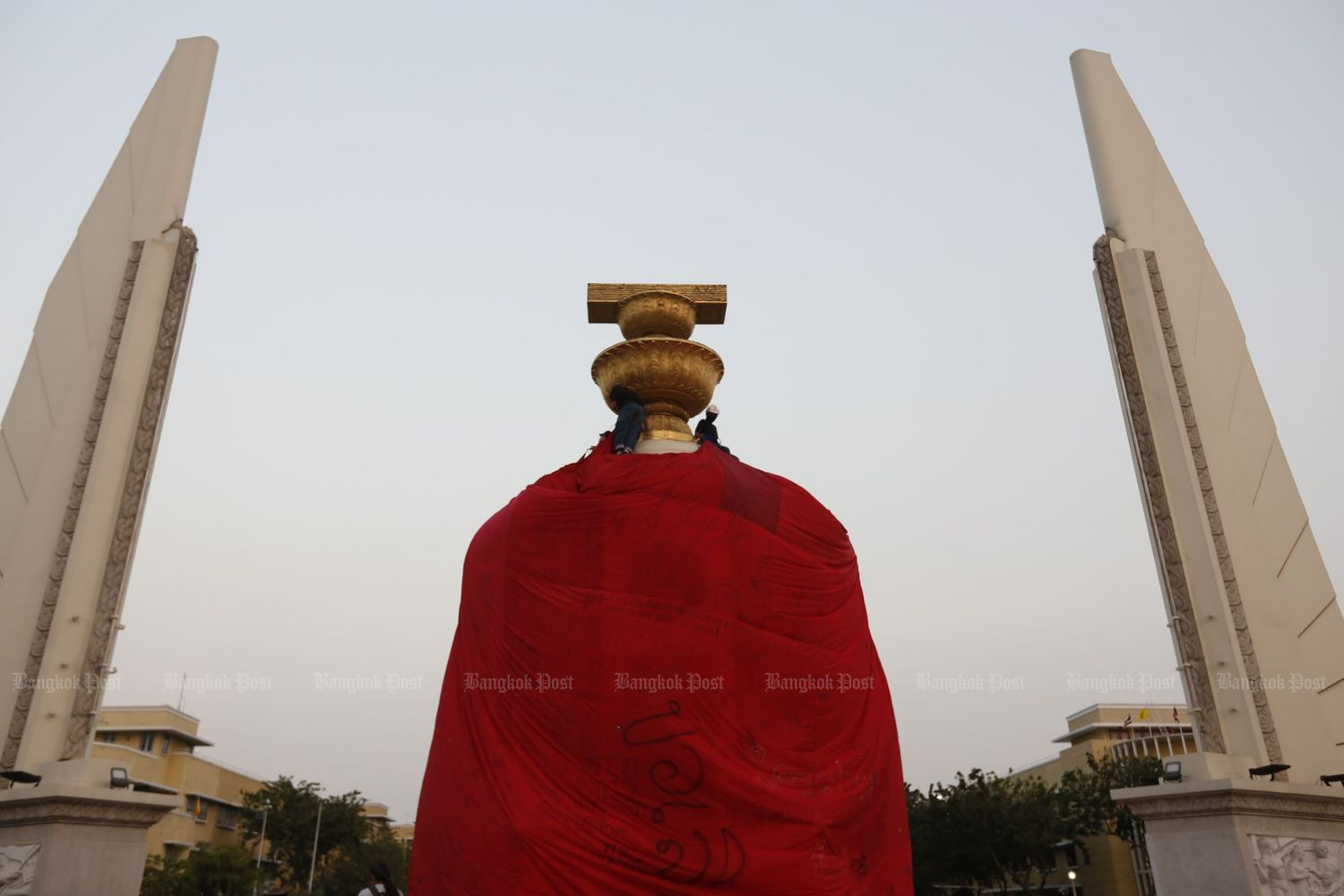 A demonstrator wraps a 30x30m banner bearing written messages to the government around the Democracy Monument on Saturday afternoon. (Photo by Wichan Charoenkiatpakul) 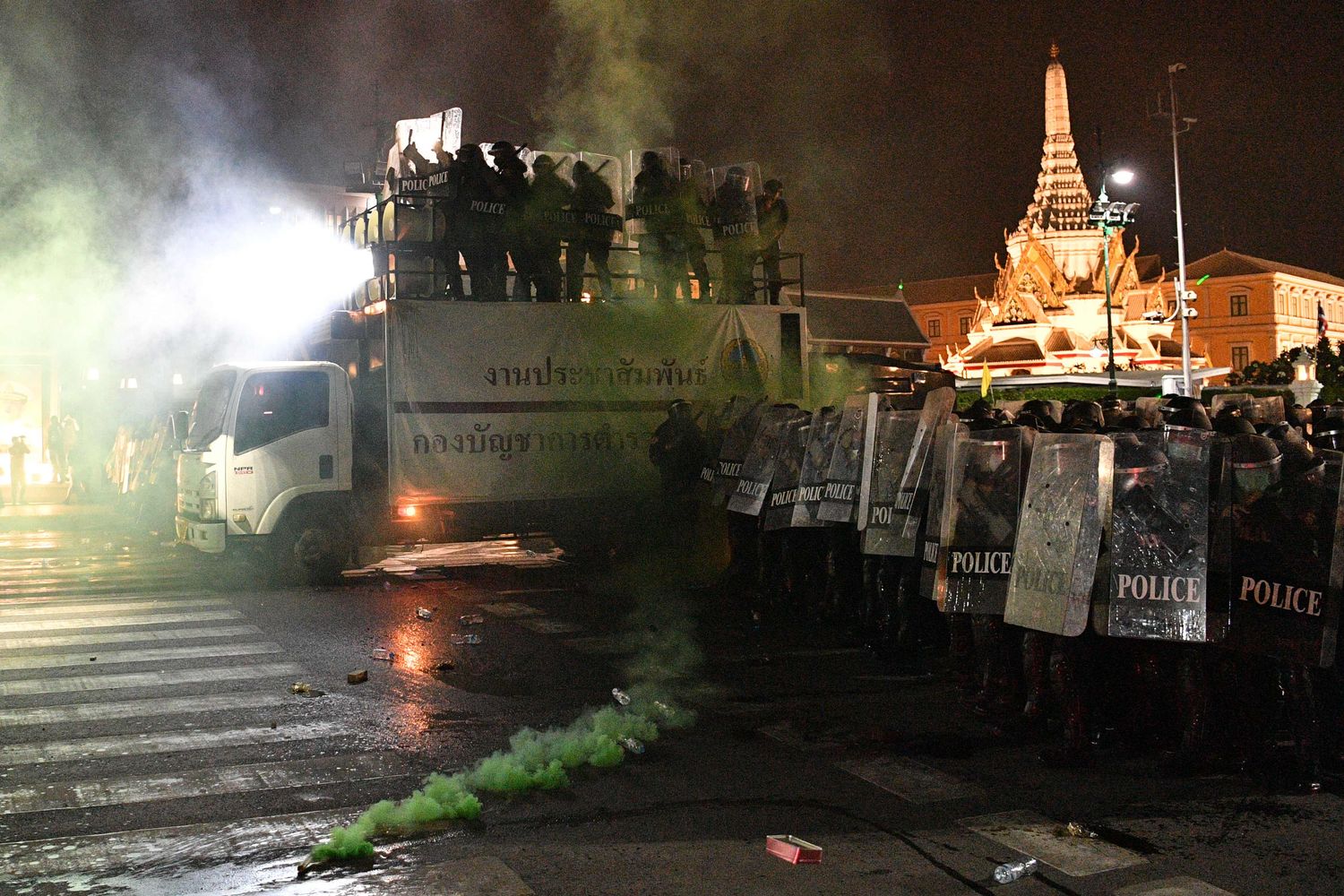 Riot police stand guard next to a smoke canister let off by pro-democracy protesters holding a demonstration next to the Grand Palace in Bangkok on Saturday. (AFP photo)