Last month's censure debate inflicted political wounds on the government and the opposition alike and a lot of that pain was caused by a bite or two from the "cobras".

Once again the "cobras" -- rebel MPs who defy their respective party lines -- slithered through the House of Representatives when the confidence votes were cast on the 10 censure-targeted ministers, who included Prime Minister Prayut Chan-o-cha.

The voting tally sprang surprises. For Anutin Charnvirakul, leader of the coalition Bhumjaithai Party, the result of the vote couldn't have been more flattering and he owed it to four MPs from the opposition Move Forward Party (MFP).

Mr Anutin, also a deputy prime minister and public health minister, raked in the most confidence votes among the 10 ministers, at 275 against 201 no-confidence votes with six abstentions.

He outperformed even Gen Prayut himself who pulled in 272 confidence votes against 206 expressing no-confidence, with three abstentions.

Political observers, after having crunched the numbers, agreed the high marks for Mr Anutin bode well for Bhumjaithai's chances in the next election.

The reason for this is simple, according to the observers. Bhumjaithai has been the most alluring party for MP defectors who have broken ranks with their former parties as well as for those who have planned "early" to contest the next polls under the Bhumjaithai ticket.

The result of the censure debate last month was telling in what the future holds for the MFP with least four of its MPs having sided with Mr Anutin by handing him votes of confidence.

Talks of "cobras" biting the very hand that feeds them had been going around prior to the debate and it was only a matter of how many, not if, they would reveal themselves.

However, the observers said it would be less than fair to accuse the four MFP MPs -- Karom Polponklang, a list MP; Peeradet Khamsamut, a Chiang Rai MP; Dr Ekkapob Pianpiset, another Chiang Rai MP; and Kwanlert Panichamat, a Chon Buri MP -- of betraying their party since a free vote in parliament is decreed by law.

The observers said that while the four votes in favour of Mr Anutin took many in the MFP aback, the party must have realised something was amiss before the censure debate got under way.

Mr Karom and Mr Kwanlert had spoken out against the MFP's decision to sponsor a draft bill seeking to amend Section 112 -- the lese majeste law -- in the Criminal Code. The bill is pending admission in parliament.

Mr Kwanlert had made it abundantly clear he did not agree with his party in pushing for Section 112's amendment via the draft bill which proposes watered down punishments against offenders. His position on the issue was shared by Mr Karom.

Mr Karom, a lawyer, was the subject of a rumour just after the Future Forward Party was dissolved in February 2020 over the illegal 191.2 million-baht loan its leader Thanathorn Juangroongruangkit had extended to it and reincarnated into the MFP.

Mr Karom was then said to be contemplating joining another camp for reasons best known to himself before staying put.

However, that was when Mr Karom's relations with his party had reportedly begun to sour.

Meanwhile, Mr Kwanlert insisted he did not have to toe the party line on certain issues which he did not necessarily find agreeable.

Observers predicted that by giving confidence votes to Mr Anutin, Mr Kwanlert and Mr Karom may have dropped more than a few hints as to which party they might wish to move to and in whose name they will contest the next election if they eventually make up their minds to part ways with the MFP.

However, Mr Karom is reported to retain links with the Srang Thai political group led by Khunying Sudarat Keyuraphan, the former chief strategist of the main opposition Pheu Thai Party. The MP might also have more than one option opened to him regarding a new "home" to defect to.

Since the censure debate, ties between the four MPs and the MFP have deteriorated to the point where a party heavyweight posted a picture of cobras preserved in liquor inside a tightly-sealed jar.

It was implied that the MPs will be held trapped in the party because the MFP has no intention of expelling them so they can be legally permitted to relocate to another party.

But the observers said that the MPs may be nominally trapped although in spirit their days with the MFP are long gone.

It effectively means they can vote on any piece of legislation or motion in defiance of the party's stand as they please. If the MFP were to punish them for it and hand down an expulsion order, the party would be doing them the most welcome service.

The Palang Pracharath Party's (PPRP) nominations of candidates to fill two vacant cabinet posts has comes surprisingly swiftly -- less than a day after the party executive board resolved to hand PPRP leader Gen Prawit Wongsuwon the final say in the changes to the party's ministerial seats in the next cabinet reshuffle.

While Gen Prawit, also deputy prime minister, did not reveal the names of the nominees, he publicly said he had already submitted the list of the ministerial posts under the party's quota to the prime minister for consideration. 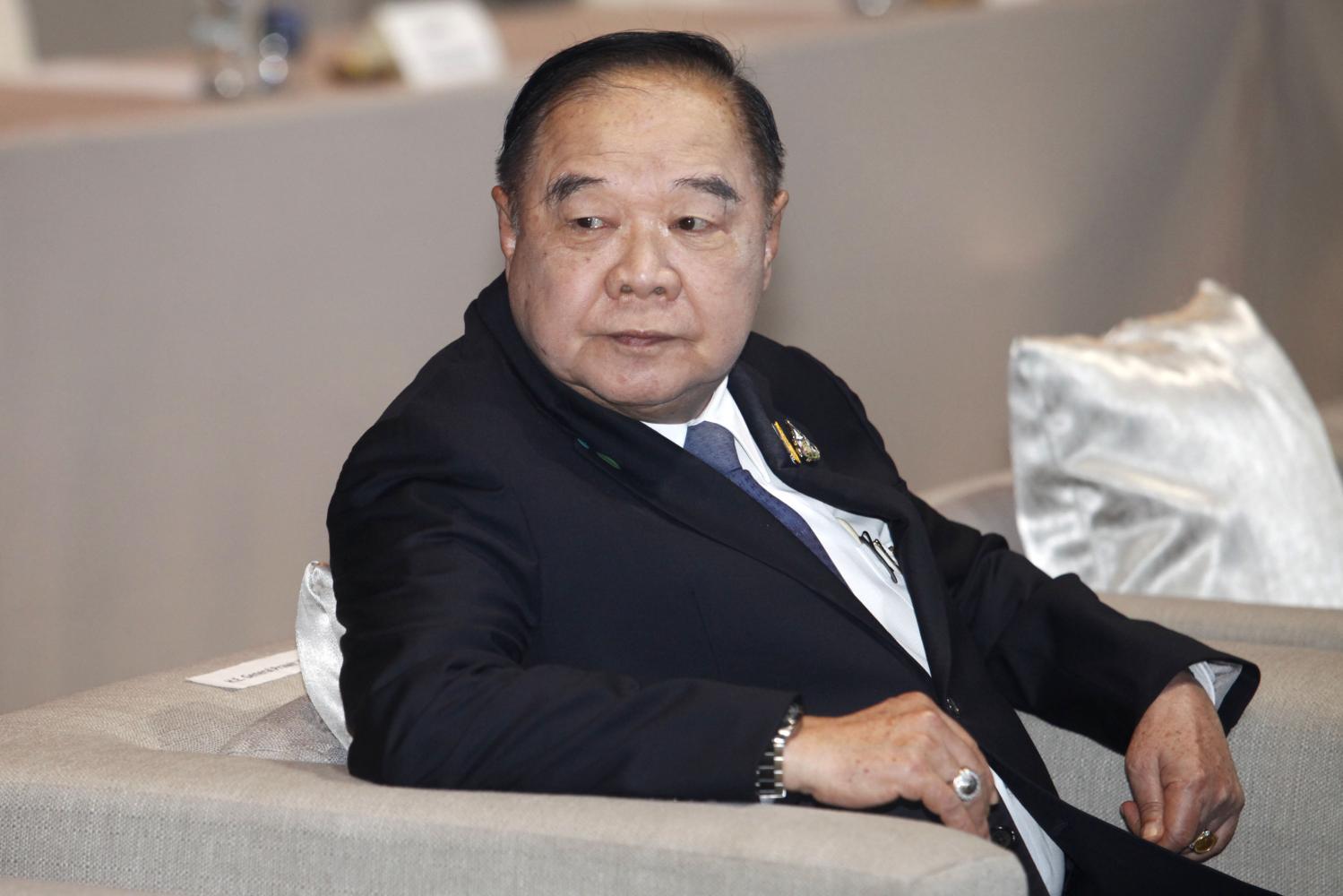 Both were removed from office as a result of their court convictions related to their roles in the People's Democratic Reform Committee street protests in 2013-2014.

According to media reports, Gen Prawit has picked two PPRP members for the ministerial posts -- a move that is likely to appease some party members afraid of losing the portfolios to outsiders.

According to political observers, the choice of Mr Chaiwut does not strike them as a surprise.

Gen Prawit reportedly promised to back him for a cabinet post when the government was formed two years ago. But with cabinet posts in short supply, Mr Chaiwut was put on the party's "waiting list" and now it appears he is at the head of the queue.

Speculation is rife that Mr Chaiwut will replace Mr Nataphol as education minister. However, last-minute changes are possible and he might end up grabbing the PM's Office minister portfolio instead.

PPRP secretary-general Anucha Nakasai, who currently serves as PM's Office Minister, might take over the Education Ministry, which, according to political observers, is deemed in keeping with his senior party position.

While Ms Trinuch's nomination has caught some PPRP members off guard, it is seen as returning a favour to her for defecting from Pheu Thai to join the PPRP.

According to political observers, Gen Prawit's summoning of Mr Chaiwut and Ms Trinuch to meet him at his residence on the evening of March 3 should also put to rest rumours about Deputy Labour Minister Narumon Pinyosinwat being awarded a "bigger" role in the rejig.

Reports emerged after the censure debate last month that Ms Narumon and Deputy Agriculture Minister Thamanat Prompow wanted to move up the ladder from deputies to full ministers.

The other member of what is known as the "Three Deputies" camp, Deputy Finance Minister Santi Promphat, reportedly wanted to swap his present post for the deputy transport portfolio, the post left vacant by Thaworn Senneam, the Democrat Party MP also convicted in the PDRC case.

According to one PPRP source, Ms Narumon got her big break when she was appointed a deputy labour minister in the previous cabinet reshuffle and she should learn to count her blessings.

"She has yet to prove her worth as deputy labour minister. All she seems to be spending a lot of time doing is tagging along with the party leader.

"So if she gets a bigger job in the upcoming reshuffle, there is a risk of that causing disunity in the PPRP. That would be unfair," said the source.