ABOUT POLITICS: Business sector joins medical heroes in trying to give slow vaccination drive a shot in the arm - Who does what in Covid-19 coordination effort in three southern provinces reignites turf war between coalition allies

However, some have lately been seen in a suit and tie with a crop of saviours stepping out of their boardrooms to rally behind vaccine procurement and national vaccination efforts.

In the first outbreak early last year, medical workers came to the government's rescue when it was fumbling its crisis management at a time when nothing had been planned to combat it, according to observers.

People were becoming agitated as the number of Covid casualties mounted. Before long, Prime Minister Prayut Chan-o-cha was pictured chairing a meeting with medical experts who devised a national strategy to contain the virus, which included imposing a lockdown in Bangkok and restricting movement.

The plan gradually limited Covid's spread and for months the virus remained under control. That was until the end of last year when a second outbreak was detected with hotspots springing up at the Central Shrimp Market in Samut Sakhon, a gambling den in Rayong and among migrants who slipped into the country illegally without passing through health checks.

The police came under intense pressure for looking the other way as illegal casinos operated under their nose and became breeding grounds for the virus. Criticism was also directed at Gen Prayut, given he is chairman of the Police Commission that directs policy oversight and approves senior promotions.

Again the medical people worked around the clock to tame the outbreak, having used their experience in handling the pandemic during the first wave.

Medical experts did warn of an impending third wave, although they could not foresee its disastrous consequences. They have been the mainstay in the nation's efforts to deal with the pandemic and battling two outbreaks over the course of a year has left them exhausted.

They, as well as the government, need backup to help them, albeit for different reasons.

The current, deadlier third outbreak has swept through the country since early this month helped by the highly contagious UK variant imported from Cambodia. It triggered a cluster of infections that originated from a high-end nightclub in the heart of Bangkok's Thong Lor entertainment district.

The UK variant has infected more people and at a faster rate than the strain in previous outbreaks. From a two-digit daily infection rate at the onset of the first outbreak, the virus has made several new highs after began clocking up more than 1,000 cases each day in the past two weeks.

Sufferers, many of them elderly, were reportedly left to fend for themselves at home with no ambulances dispatched to take them to hospitals, whose intensive care units were also filling up fast. Some who were too sick did not make it.

At the same time, the government has drawn flak for a slow national inoculation programme even though millions of vaccine doses have arrived in the kingdom.

It also found itself the target of criticism for being too reliant on two vaccine manufacturers, Sinovac and AstraZeneca. Critics lambasted the government for not shopping around and acquiring more vaccines as other alternatives from different sources were becoming available.

While many were lining up for jabs, others were having second thoughts after learning of side effects from inoculations, including a paralysis-like condition which was reported.

Shots, initially earmarked for frontline medical workers and people with underlying health issues, are now being offered to people in at-risk population segments. However, jabs have been administered at a snail's pace, according to critics who said Thailand was among the least-vaccinated countries in Asean.

The sense of urgency to hurry the national vaccination programme along saw the Thai Chamber of Commerce (TCC) rise to the occasion. The country's economic powerhouses are being seen as an emerging sturdy force that can help prop up the government, just as medical workers have done over the past year.

Forty chief executives have agreed to help the government speed up vaccinations by providing logistics, personnel and IT support. The private sector is also willing to import more vaccines once approved by the government.

TCC chairman Sanan Angubolkul said recently the CEOs felt that the vaccination rollout, which has seen just 0.4% of the population inoculated to date, was proceeding much too slowly.

"The government needs to get hold of sufficient vaccines," he said, adding the CEOs and the TCC were right behind vaccine rollout efforts.

Critics have said this reaction could also be construed as the business community's becoming impatient with the slow rate of vaccinations, which if allowed to persist, would protract the Covid-19-aggravated economic gloom. 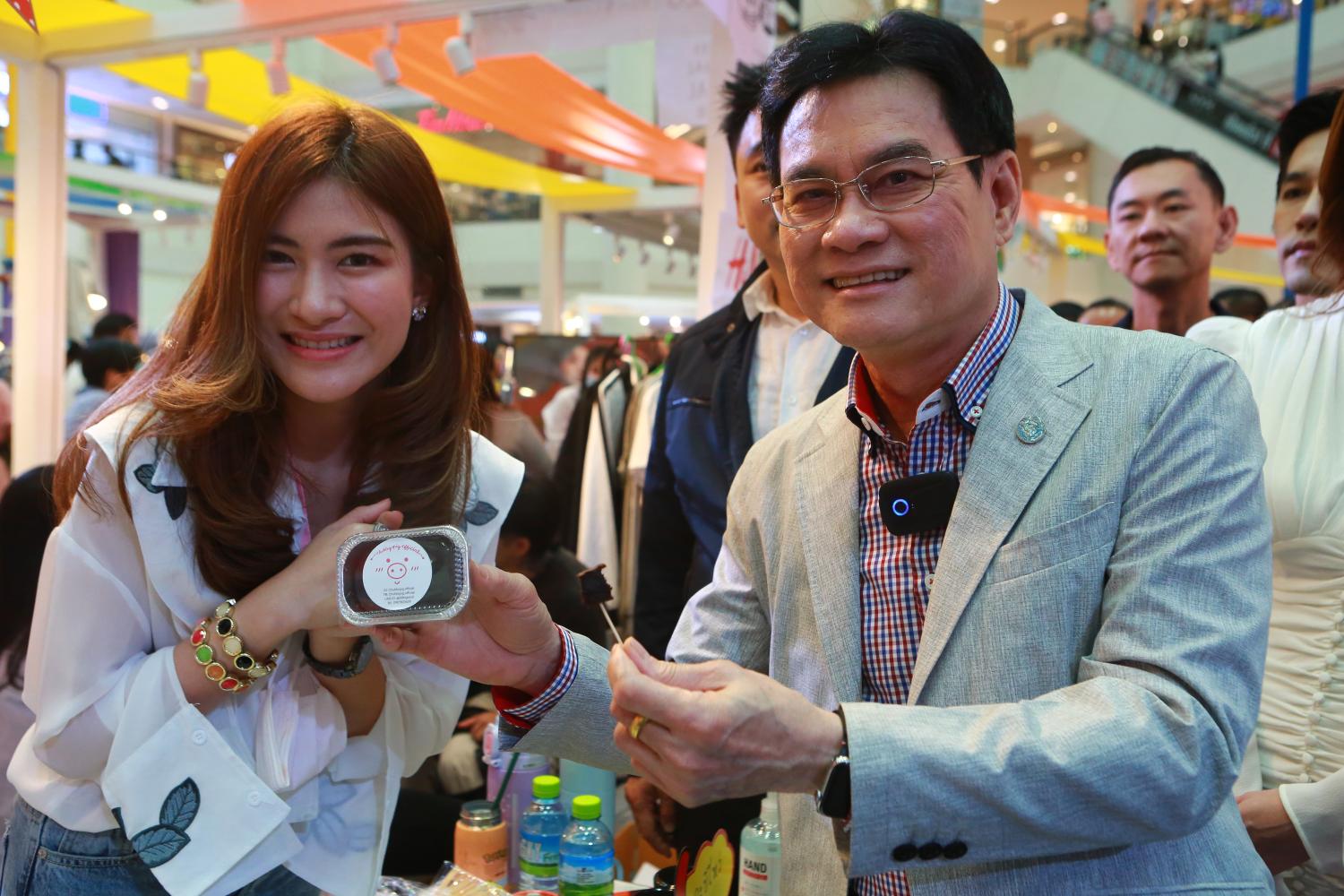 Jurin: Makes no secret of his displeasure

It sounded more like a threat than a request when the Democrat Party recently urged the government to review the appointment of a key figure in the ruling Palang Pracharath Party (PPRP) to supervise its Covid-19 coordination effort in three southern provinces.

Capt Thamanat, an MP for the northern province of Phayao, was initially assigned to supervise the campaign in Phayao, Chiang Rai and Nong Bua Lamphu -- his own political bastions -- until the switch, which was reportedly approved by Prime Minister Prayut Chan-o-cha.

The party leader pointed out that the three southern provinces, which are widely regarded Democrat strongholds, would be better supervised by Mr Niphon, who has traditionally overseen political affairs in the area.

Public interest would have faded had the Democrat leader not said the matter should be resolved this week to prevent it "getting out of hand".

It is the second time the PPRP has upset the Democrat Party and further eroded the trust between itself and the third-largest coalition party, according to political observers.

The first incident was when the PPRP was considering fielding a candidate in the March 7 by-election in Nakhon Si Thammarat's Constituency 3, thus competing in the race with the Democrats.

The seat was previously held by Thepthai Senpong, a Democrat stripped of his MP status by the Constitutional Court over his conviction last year for fraud in 2014 elections for the Nakhon Si Thammarat provincial administration organisation chief.

Asked about the PPRP entering the race, Mr Jurin was quoted as saying that if the Democrats were the ruling party, they would not compete in a by-election against a coalition partner and would instead respect political etiquette.

The PPRP entered the contest anyway and its candidate Ayasit Srisuwan defeated the Democrat Pongsin Senpong, a younger brother of Mr Thepthai, and made unwelcome inroads into the territory.

Capt Thamanat, the PPRP's deputy leader, was said to be the man behind the party's win and observers say his new role in the South, particularly in Songkhla, is being treated with scepticism and met with displeasure from the Democrats.

Two by-elections are expected in Chumphon and Songkhla -- to find replacements for two Democrats recently convicted over the 2013-2014 street protests led by the now-defunct People's Democratic Reform Committee (PDRC).

The polls are likely to be scheduled when the Constitutional Court decides on the status of the two Democrats -- Chumpol Julasai and Thaworn Senneam -- who were jailed by the Criminal Court for 11 years and five years respectively for their roles in PDRC rallies. These are high-stakes contests for the party following its defeat in Nakhon Si Thammarat.

Addressing the allocation of work in the Covid-19 coordination campaign, Mr Jurin appeared to suggest his party had been stymied, with Democrat ministers allocated fewer provinces and several PPRP cabinet ministers assigned more.

The Democrats' newest minister, Sinit Lertkrai, an MP for Surat Thani, had been assigned to supervise the Covid work in Nong Bua Lamphu and Roi Et in the Northeast but new PPRP minister and MP for Sa Kaeo, Treenuch Thienthong, was put in charge of her own constituency province and two others.

Observers warned that Mr Jurin's call for the issue to be addressed should not be treated lightly by the prime minister, who needs coalition unity and support in his stewardship of the Covid-19 crisis.

On Wednesday, Gen Prayut made an about-turn, having apparently taken stock of the Democrats' disgruntlement, reportedly retracting the order and agreeing to give the role to a Democrat.

The government can ill afford to provoke the ire of a coalition partner because that could see the cabinet disintegrate.