ABOUT POLITICS: Critics have rounded on the government for its perceived mismanagement of the third Covid wave, but the PM looks unlikely to step down - After charter court ruling, path looks clear for Thamanat to set his sights on the PPRP secretary-general post

Calls are being made louder than ever before for Gen Prayut Chan-o-cha to step down for his perceived mishandling of the government's response to the third outbreak of Covid-19, which has seen fatalities recorded every day for weeks.

The scale of the casualties has laid solid foundations for the opposition and critics to grab the opportunity to join the chorus of demands for Gen Prayut's resignation. However, it is far from clear how showing the PM the door can be tenable politically under the current climate, in which the nation is waging a war against a pandemic.

The opposition has piled pressure on Gen Prayut to quit after incidents multiplied in which Bangkok residents, several of them infected with Covid by family members, died at home while waiting to be taken to hospital for treatment.

These incidents were reported on the back of an upsurge in infections with more than 2,000 daily cases and fatalities being recorded by the day.

Critics blame the government for failing to stop the mass exodus of Songkran holiday travellers in the middle of last month, which is what experts believe was the primary trigger behind the latest upsurge in infections.

The critics insist the government had full knowledge about the third outbreak, which emerged as an infection cluster in the high-end Thong Lor entertainment district of Bangkok in the lead-up to the biggest travel period of the year. Yet, people were able to travel all around the country to be with families and meet friends during the week-long holiday.

The government maintains that while travelling was permitted, the festival was a generally subdued affair nationwide since it had banned the typical water-splashing revelry and other close-contact events, such as the rod nam dam hua rite, in which younger people seek a New Year's blessing from the elderly.

One observer said the government may have thought it could not do what it did at last year's Songkran, when a national lockdown was imposed to contain the first outbreak of the virus.

The circumstances have changed, according to the observer -- whereas last year the government had borrowed a trillion baht to finance a host of Covid relief programmes and had plenty of cash in hand, 12 months later the government now could not afford to spend as much on relief efforts, despite Finance Minister Arkhom Termpittayapaisith's assurance that 400 billion baht of Covid funds is still in the coffers and is adequate for oiling the aid schemes further.

The observer noted the government's decision not to introduce a lockdown this year was motivated by financial constraints. It reasoned that many businesses should be allowed to continue to operate during the busy festival to earn vital revenue, thus enabling some workers to survive the crunch and lessen their chances of relying on state relief.

The critics, however, insist growing public anger with the government and law enforcement agencies is justified because they have kept repeating mistakes -- they blundered by failing to prevent the Thong Lor cluster and committed a second mistake by letting Songkran travel happen despite all the logic against it.

Post-Songkran infections have claimed many lives and caused what is widely viewed as preventable deaths, due to the infected reportedly being unable to call for help on emergency hotlines or because they had been put on a waiting list for an ambulance. These blunders, claimed the observer, have wiped out any political credit the government accumulated in its management of the previous two outbreaks.

Nevertheless, the opposition's demand for Gen Prayut's resignation over the "irreversible damage" the government has done to the country in its mishandling of the crisis must be taken with a pinch of salt.

Jade Donavanik, a legal scholar and former adviser to the Constitution Drafting Committee, said that even if Gen Prayut were to step down today, his cabinet members would all keep their jobs, albeit in caretaker roles.

In that event, parliament would choose a new prime minister from among candidates nominated by political parties, and of these there would only be two genuine contenders: Deputy Prime Minister and Public Health Minister Anutin Charnvirakul and ex-prime minister Abhisit Vejjajiva, a former party-list MP of the Democrat Party.

Assuming there is no charter amendment, 250 senators would take part in parliament's selection of the new prime minister, said Mr Jade.

The academic said the opposition's call for an abrupt change of government at this time is not technically or constitutionally possible. There is no choice therefore but to follow the current parliamentary procedure.

Mr Jade, however, said that may not be the opposition's intention. "What it actually wants is to become the government," he said. 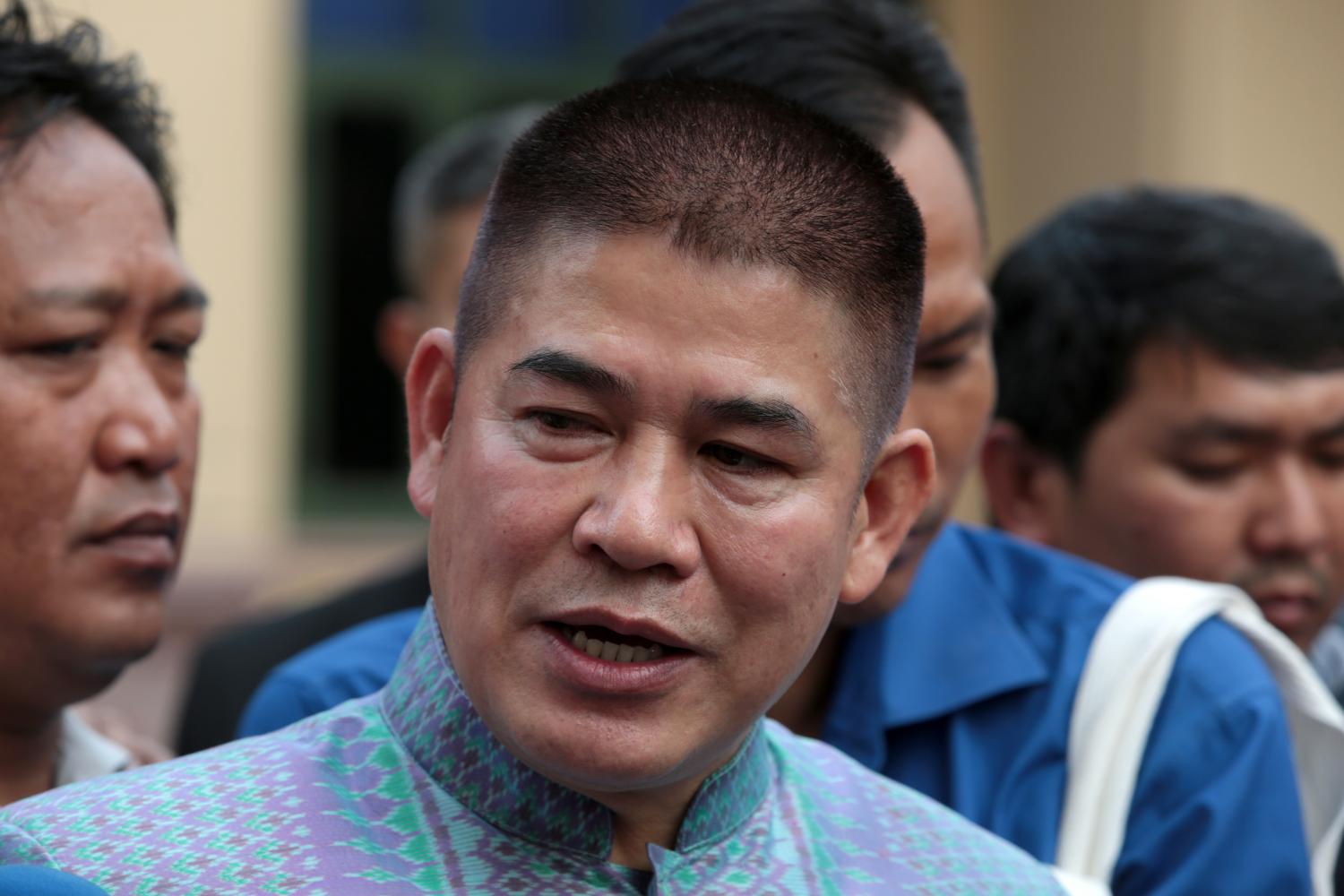 Aiming right for the top?

Capt Thamanat Prompow, who is strongly tipped to become secretary-general of the ruling Palang Pracharath Party (PPRP), has cleared a legal hurdle with the Constitutional Court ruling him fit to continue serving as an MP and deputy agriculture minister despite his criminal record in Australia.

The Constitutional Court judged on Wednesday in favour of the PPRP MP for Phayao province, saying that he is qualified to be an MP seat and hold a cabinet post regardless of his having been sentenced to four years in prison in Australia in 1993 in connection with a heroin smuggling case.

When news first emerged that the PPRP MP might be allocated a minister's post during the formation of the government almost three years ago, there were questions about his qualifications.

Deputy Prime Minister Wissanu Krea-ngam was quoted as saying at the time that the case in Australia did not have a bearing on his qualifications to be a minister because a person was barred from taking a ministerial post only when their guilt was decided by a Thai court.

Capt Thamanat, who has always denied involvement in the case, was appointed deputy agriculture and cooperatives minister. The controversy gained traction when the opposition camp launched a censure debate in February last year to grill him over the drug-related conviction.

The court ruling on Wednesday was in response to a petition filed by members of the opposition Move Forward Party in May last year following that no-confidence debate. It was forwarded to the court for review by House Speaker Chuan Leekpai.

In the petition, the court was asked to determine if Capt Thamanat, who is also a deputy leader of the PPRP, should be disqualified as an MP under Sections 98 and 101 and a cabinet member under Sections 98, 160 and 170 of the constitution because of his criminal record.

In its ruling, the court explained that a jail sentence that could lead to Capt Thamanat being stripped of MP and cabinet member status must be made by a court in Thailand, not a foreign court.

His criminal conviction handed down by a New South Wales court in Australia has no legal ramifications in Thailand, according to the court. Following the court ruling, political observers suggested that the coast was clear for Capt Thamanat to aim for the coveted post of PPRP secretary-general.

PPRP leader Gen Prawit Wongsuwon has reportedly plotted an internal shake-up and is backing Capt Thamanat for the post, which is currently held by Prime Minister's Office Minister Anucha Nakasai.

Capt Thamanat would likely already have the post had the Covid-19 outbreak not forced the postponement of the April 18 annual meeting to find replacements for two party executives -- Buddhipongse Punnakanta and Nataphol Teepsuwan.

The pair were removed from their party positions and ministerial posts after being convicted by the Criminal Court for their roles in the 2013-2014 street protests led by the People's Democratic Reform Committee (PDRC).

According to political observers, Gen Prawit's faith in Capt Thamanat has grown since the PPRP's recent win in the by-election in Nakhon Si Thammarat, a traditional stronghold of the coalition Democrat Party.

It is widely believed that Capt Thamanat's next crucial task is to lead the PPRP into battle in the Bangkok governor election in which the PPRP leader is likely to back former national police chief Chakthip Chaijinda for the job.

Capt Thamanat was recently appointed to oversee a Covid-19 coordination effort in three southern provinces in a move seen as a PPRP bid to make inroads into a region where the Democrats command vast electoral support.

The appointment was overturned by Prime Minister Prayut Chan-o-cha to defuse coalition tension when the Democrats cried foul and asked for the issue to be addressed properly.

While the court's decision on Wednesday is a boon for Capt Thamanat, who can continue with his political ambitions without being worried about qualification questions, political observers noted the judicial review did not touch on the conviction itself because it was not petitioned to clarify the subject.

So, Capt Thamanat is facing a barrage of criticism from the public over his suitability to keep his job in parliament and the cabinet. His image deficit would run even deeper if he was made the PPRP secretary-general or appointed a full minister, the observers said.