ABOUT POLITICS: Critics say govt is taking a huge political gamble with its reopening, knee-jerk pandemic measures v Coast is not yet clear for the Democrat-sponsored charter change bill as the scrutiny process may have to be halted if it is found 'unconstitutional'

Prime Minister Prayut Chan-o-cha has set himself one deadline after another to meet which can easily make or break the government.

Several weeks ago, the government announcement to reopen Phuket's doors to tourism was applauded. A permanent fixture on the world tourism map, the island province has been among the worst casualties of the Covid-19 pandemic which saw its borders shut in the first quarter of last year.

The tourism sector, which the country depends on heavily for foreign exchange, has been brought to its knees with the entire supply chain, from hotel owners to tour guides, finding themselves out of a job and unemployed for months on end.

A tourism expert said a flickering light at the end of the tunnel for people in the industry went out when the third and current virus outbreak occurred at the beginning of April.

The government too has found itself under increasing financial constraints from forking out hundreds of billions of baht in aid and relief to alleviate people's hardship and sustain an economy in freefall.

The government, which has been under growing political pressure from economic woes and the slow vaccine rollout, has little option but to tackle the problems on both fronts.

Unlike in the first outbreak this time last year when the government was able to afford to take out the first one-trillion-baht loan to mitigate the impact of the virus, it has figured it cannot put the economy on hold and watch the tourism sector starved of cash any longer, according to the expert.

A possible solution was in sight, which prompted the mass inoculation of enough people in Phuket to achieve herd immunity while setting Thursday as the date to roll out the red carpet to welcome back foreign visitors from countries with medium or low Covid-19 risk.

The so-called Phuket Sandbox has been created by the government to pilot the re-start of foreign tourism. Other major destinations, including Chiang Mai and Pattaya, are keeping their fingers crossed that the scheme, which does not require quarantining, will be a success story that they can emulate.

However, critics have sounded the alarm, saying the programme is prone to potential quagmires. For starters, it could increase the risk of virus imports despite a rigorous process of health checks promised for overseas tourists who will be spending their long stay in Phuket.

The concern is being harboured as virologists warn that a third booster dose might be necessary "to be on the safe side", suggesting that double doses might not be sufficient to ward off infection or prevent severe conditions or death if and when the virus is contracted.

Medical authorities have confirmed the prevalence of the highly contagious Delta (Indian) and Beta (South African) strains in parts of the country.

If any infections "leak" into the country via the sandbox programme, they would add to the many political wounds that have been inflicted by Covid-19 on the Prayut administration.

According to a recent Nida Poll, Gen Prayut came second with 19% when people were asked who should be prime minister in today's political climate. The highest rating went to "nobody".

Meanwhile, Gen Prayut has planned further ahead to wake the country from its deep sleep. He has set the bigger goal of reopening the whole country to tourism and business in less than 120 days, a deadline falling in the middle of October.

Critics insist the government should take one cautious step at a time. They say its political survival depends on how well its vaccination drive works and on calming the nerves of people and businesses battered by Covid containment measures that tend to change suddenly and on a regular basis.

A case in point was the order announced in the Royal Gazette last weekend to shut down construction workers' campsites in the worst Covid-hit provinces including Bangkok for 30 days. It stoked fears that an exodus of workers could transmit the virus among their families upon returning to their home provinces.

A huge outcry has come from restaurants and eateries which have been subjected to repeated restriction orders. They were allowed to resume full operations for just five days before the latest dine-in ban was thrust on them.

It was reported another 50,000 restaurants and related businesses could go under as a result of this latest partial lockdown.

As for the government and Gen Prayut, their political fates may already be decided, according to the critics.

Rewrite at risk of the axe

Despite overwhelming support from the Senate in the first reading, the coast is not yet clear for the Democrat Party-sponsored charter amendment bill which is pending scrutiny by a vetting committee in the second reading, according to political observers. 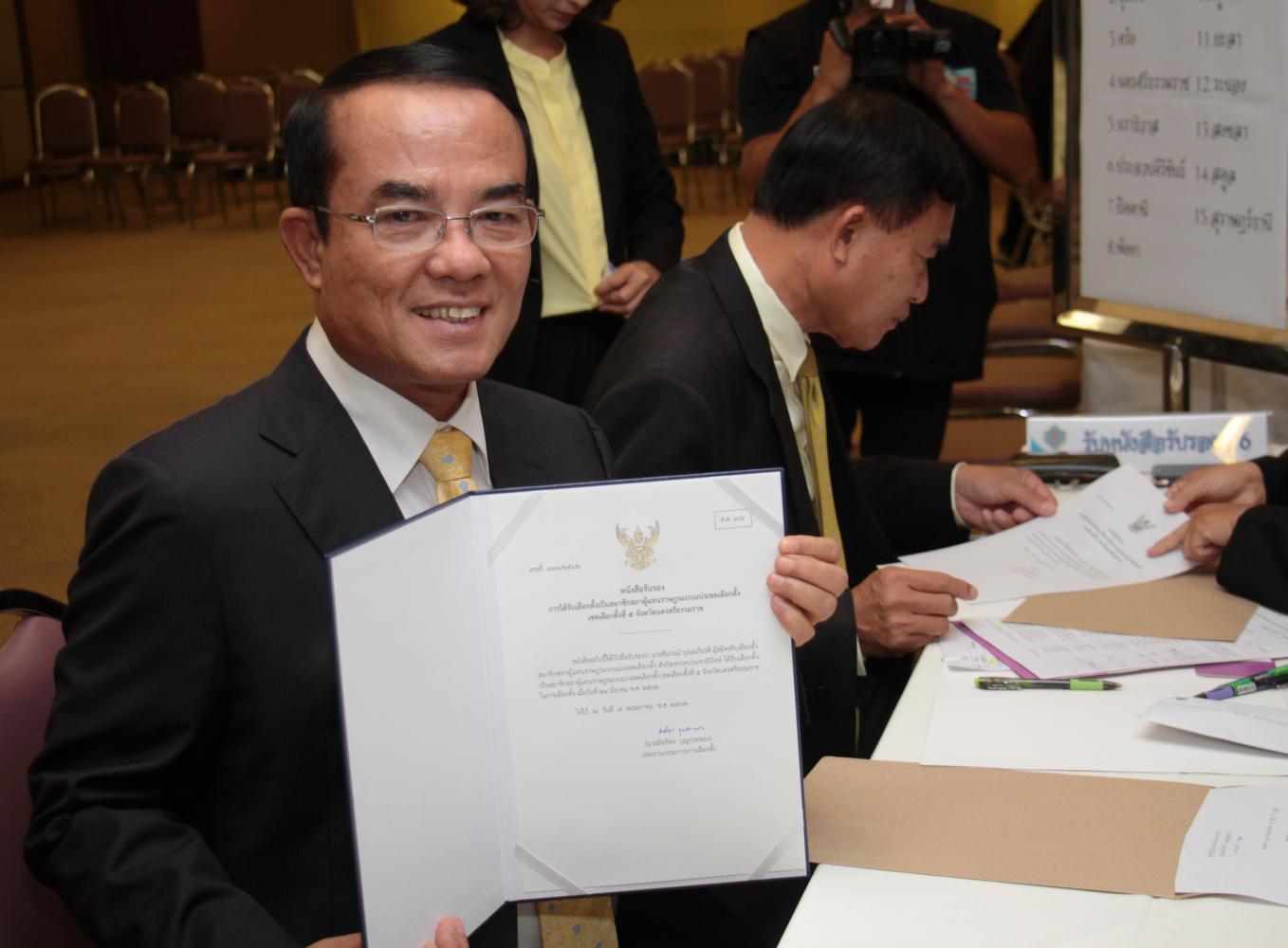 Chinnaworn: Insists draft a good one

The bill, seeking to revise the voting system and change the proportion of constituency and party-list MPs, has cleared a major hurdle, winning 210 votes in favour from senators, in addition to 342 votes from House members. Many political observers believe there is nothing to stop it now.

However, as the charter amendment draft is on its way to the next phase of examination, its flaws are revealed and the scrutiny process may have to be suspended if it requires a review by the Constitutional Court.

The Thai Local Power Party is among those threatening to ask the Constitutional Court to rule on the bill before the second reading starts, if possible.

The 45-member committee set up to vet the bill is scheduled to hold its first meeting on Tuesday.

According to Kowit Phuangngam, a list-MP of the small coalition government, the bill targets only two sections -- Section 83 and Section 91 -- and it is not consistent with several other charter provisions governing the voting system.

Section 86, for example, addresses the number of MPs in each province and the division of constituencies but it is excluded in the Democrat Party's draft.

In his view, the vetting panel is not authorised to make changes to Section 86 to make it relevant to Section 83 and it may lead to legal complications when the charter amendment draft goes before the joint sitting of senators and MPs in the third reading.

It is possible that some may consider the amendment bill "unconstitutional" and call for the third reading to be suspended.

However, Chinnaworn Bunyakiat, deputy chief government whip and Democrat Party MP, has insisted the party's charter amendment draft is well thought out and will not be in conflict with the charter.

According to the Democrat veteran, it is the party's intention to include only Sections 83 and 91 in the charter amendment draft so the scrutiny panel can discuss the voting system in detail. Section 86 can be discussed and amended without legal complications.

Mr Chinnaworn has expressed confidence that the party's charter amendment draft will not require a review by the Constitutional Court. He has cited the House meeting regulations to support his claim.

He has given his assurance that the scrutiny panel is allowed to make changes relevant to the bill's core elements. With that being said, the proposed amendments to Section 86 and other sections related to the voting system can be made and are perfectly constitutional, according to the Democrat MP.

"We want to see collaboration from senators and MPs including those from the opposition camp in the amendment process. A good electoral system will lead to a good elected government," he said.

According to political observers, the charter proposal to revise the voting system in Section 91 merits special attention and could trigger wild discussions.

While the Democrats' draft calls for the scrapping of the current calculation method for list-MPs, it does not propose a replacement as it simply states that the new method should be addressed in an organic law to reflect a suggested two-ballot system which is earmarked to take over the current single-ballot method.

Jade Donavanik, a legal scholar and former adviser to the Constitution Drafting Committee, has predicted that the mixed-member proportional system, similar to the one adopted by Germany, will be put forth by political parties.

Under the system, if a party's popular vote accounts for 10% of all ballots cast nationwide, then it will receive 50 of the 500 House seats. There is also a stipulation that if a party falls short of the 10% mark by a small margin, it will be allocated some party-list seats to make up for it.

He believes that this voting system is likely to strike a chord with major political parties like the Democrats and the ruling Palang Pracharath Party (PPRP) because it is expected to give them the upper hand in the next general election.

The daily toll rises to 165 Covid-19 fatalities and 17,669 new cases, with Greater Bangkok reporting more than half of the deaths.

The United States will give Thailand another 1 million doses of Covid-19 vaccine, to underline the long-standing close relations between the two countries, according to a Thai-born US senator.

PHNOM PENH: Cambodia is set to launch a lockdown in eight provinces bordering Thailand from midnight on Thursday, in a bid to prevent the spread of the Delta variant of the coronavirus in the Southeast Asian country.