Protests feared to be losing steam

ABOUT POLITICS: Anti-government groups said to be lacking unity and urged to rethink their strategy if they want to oust Prayut v Democrats' political standing continues to dwindle, having gone from a leading contender in 2011 to a junior coalition partner at present

The anti-government protests are a mix of old and new groups disgruntled by the prolonged grip on power by the generals who are living proof that there is political life after the dissolution of the coup-engineering National Council for Peace and Order, according to a political expert who asked not to be named.

The protests may be hoping to branch out into various segments of the population by spurring a common resentment against the government harboured by people steeped in grievances caused by the Covid-19 pandemic.

However, the weekly protests have so far failed to attract a large following. Even though they share a goal of pressing for Gen Prayut Chan-o-cha's resignation as prime minister, they have not yet come up with a concrete plan to illustrate how a post-Prayut Thailand will be any better off, which may be why they have failed to get masses of people on board, said the scholar.

It has been weeks since the three protest groups -- The Prachachon Khon Thai (Thai people) led by lawyer Nitithorn Lamlua, the Ratsadon youth-led movement and the Thai Mai Thon (Thais Won't Stand It) group led by Jatuporn Prompan, chairman of the red-shirt United Front for Democracy against Dictatorship -- held parallel rallies in the capital.

Prachachon Khon Thai, by far the smallest of the three groups, has trumpeted the government's various failures, highlighting its alleged unfair distribution of wealth in the country. Thai Mai Thon, meanwhile, called for people to reach a consensus on who should replace Gen Prayut as premier to tackle the Covid-19 crisis, reverse the economic slump and rewrite the constitution, all of which are urgent tasks at hand.

The Ratsadon group, on the other hand, has placed greater emphasis on seeking to oust Gen Prayut of late although it has vowed to stand firm on its longstanding demand for reform of the monarchy, something the political expert said may have contributed to the movement's limited growth.

The expert said the three groups may have dwelled on protest demands and issues which people have heard many times before. Once the issues raised at protest stages become repetitive, the protests lose dynamism.

According to the expert, the movements could gain traction if they placed a clear focus on a few damning issues and were to "go deep" with them, rather than skimming over several matters that are fragmented, which carry little weight and are not impactful.

Without an "issue-centric" platform to sustain the rallies, the protests are in danger of degenerating into nothing but a theatrical performance that is heavy on rhetoric and light on substance, the expert said.

The expert noted that in the past, the "substance" opposition blocs had brought forth in parliament in no-confidence debates which had eventually led to the downfall of the government, had to do with alleged graft. Such malpractice in office committed by any political post holder is unforgiveable among the people.

The reality now is the three protest groups are not united and need to rethink their moves, the expert said.

Following the ruling, the Criminal Court sent a notice to Bangkok Remand Prison saying Jatuporn will need to serve another 11 months and 16 days over the 2009 defamation case filed against him by former prime minister Abhisit Vejjajiva.

Jatuporn has said that his imprisonment would not subdue Thai Mai Thon as other co-leaders could take over from him. However, the expert reckoned they would not be able to match Jatuporn's magnetic qualities and prominence as a public speaker.

The expert said many Thai Mai Thon followers might switch to the Ratsadon group which, in the last two weeks, has embraced a new tactic for staging its protests by rolling out vehicles onto the streets of Bangkok in so-called "car mob" rallies.

The protests, where cars rather than people crowd together, are obviously meant to sidestep the emergency decree on public health which bans mass gatherings of people. The participating vehicles also honked their horns in a gesture of protest against Gen Prayut as they plied the city's main thoroughfares.

However, the expert said the rallies, organised by red-shirt activist Sombat Boonngam-anong, might not be appealing to Thai Mai Thon protesters who do not drive or own a car.

The fate of the "car mobs" is also in doubt as police are reportedly preparing charges to be filed against Mr Sombat for violating the decree and causing a public nuisance.

The Democrat Party has been a coalition partner for as long as the current administration has been in power and the country's oldest political party is expected to stick with the government through thick and thin. 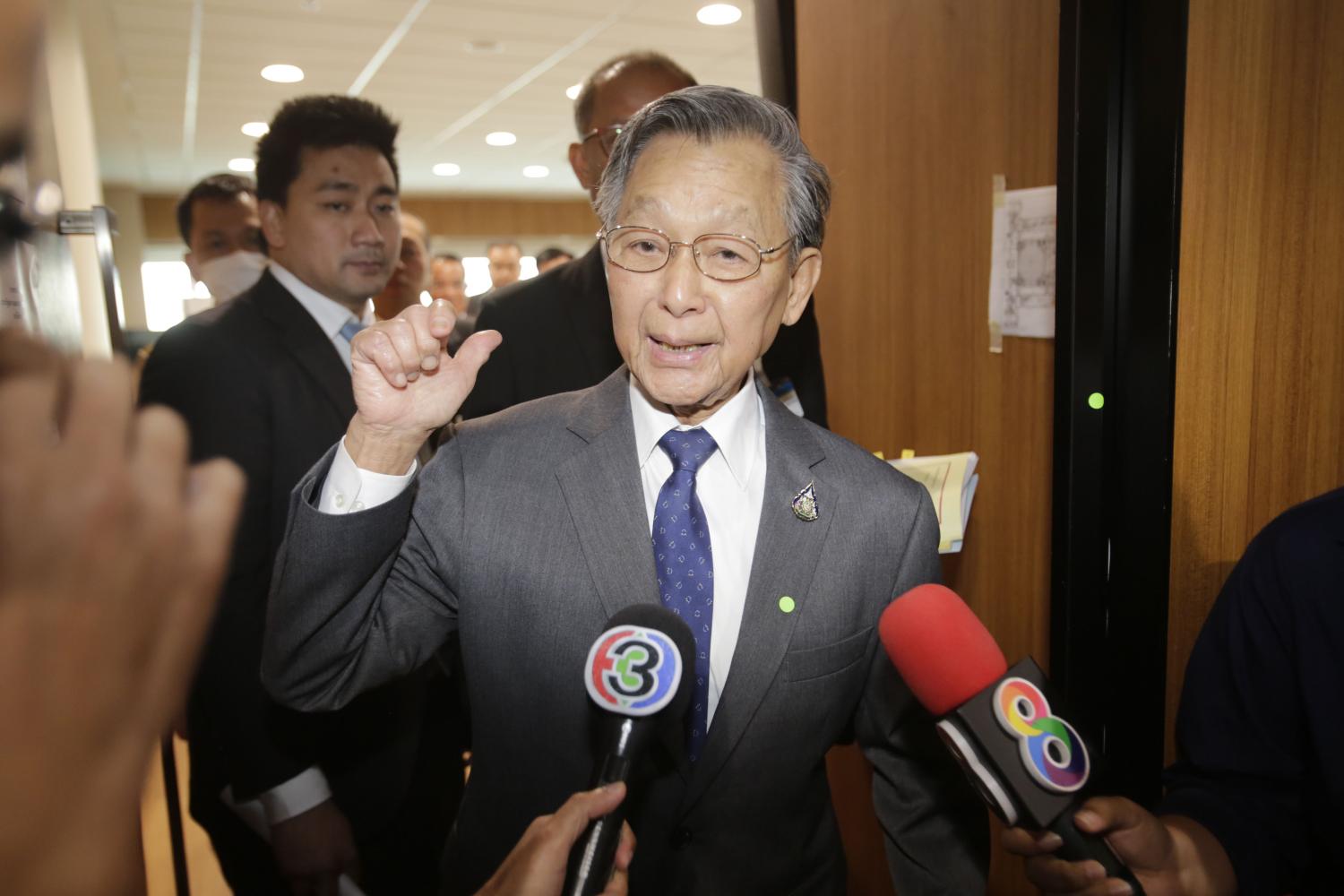 That is despite the resignation last week of Anwar Salae as the Democrat Party's deputy secretary-general, and Mr Anwar, reputed as one of the party's most vocal renegade MPs, has refused to step down quietly.

In his resignation letter addressed to leader Jurin Laksanawisit, the party secretary-general Chalermchai Sri-on and party members, Mr Anwar stated he wanted the party to hold a general assembly as soon as possible to find his replacement as deputy secretary-general and fill a vacancy for the party deputy leader in charge of the South, a region long dominated by the Democrats.

However, the crux of the letter was in the paragraphs that followed, which touched a raw nerve among the party faithful. The Pattani MP wrote that the Democrat Party's plummeting popularity since the 2019 election was not over yet and the downward spiral was likely to go on a while longer.

Firing a broadside at party executives, he said the blame must fall squarely on their shoulders for not listening to his repeated demands for the Democrat Party to pull out of the embattled government coalition which has been rocked by its underperformance in handling the Covid-19 crisis.

According to a political source, Mr Anwar could be one of a few dissenters in the party under Mr Jurin's leadership or he might represent the tip of an iceberg of growing discontent among members within the party.

Either way, his frustration could be traced back to when the party leadership changed hands from Abhisit Vejjajiva to Mr Jurin. The Democrat Party, according to the source, has experienced one of its deepest cracks in memory with the polarisation of members becoming clearly visible.

Mr Jurin's rise to the top seat of the party was also said to have motivated former finance minister, Korn Chatikavanij, to call it quits and subsequently establish his own Kla Party. Mr Korn had been a candidate in the party's leadership race but was defeated by Mr Jurin.

The source said the Democrat Party's political fortunes have dwindled spectacularly, having gone from a main party in the 2011 elections when it won 159 out of 500 MP seats to a junior coalition partner of the current government after capturing only 53 seats in the 2019 polls.

Mr Abhisit, who led the party in the 2019 election, was held responsible by many supporters for the party's reversal of fortune. Supporters were counting on Mr Abhisit to show an interest in leaning towards a political alignment with the Palang Pracharath Party which, at the time, looked certain to nominate Gen Prayut Chan-o-cha as prime minister.

When Mr Abhisit kept to his principles and stood on his own, the disappointment felt by supporters was played out in ballots cast, according to the source. The poll results handed the Democrat Party its biggest drubbing in many years, especially in Bangkok where it failed to win a single seat. This was a far cry from the previous election when the party took the capital by storm.

The source said the party has not had much success in making up lost ground. With the next election speculated to be taking place next year after the Covid-19 pandemic crisis subsides, some supporters fear the Democrat Party remains ill-prepared to stage a comeback. They insist it cannot afford another humiliating defeat in the next election or it will be in real danger of being relegated to minor party status.

On the back of such fears, it is rumoured that a plan has been forged to invite former leader Chuan Leekpai, who is now parliament president, to return and head the party. Mr Chuan, who led the Democrats from 1991-2003, is highly respected by party members, who see him as a unifying and stabilising force.

Another Democrat source said many members are not confident Mr Jurin can salvage the party from decline. At meetings, members have urged Mr Jurin to withdraw from the government although such calls appear to have fallen on deaf ears.

"It feels a lot like we're in free fall. We might end up being a small, insignificant party because we can't even stay a medium-sized one," the source said.

The way to avoid disaster is for the party to capitalise on its strongest point which is to bring back Mr Chuan to steer it, the source added.

At the very least, Mr Chuan, known as Trang's favourite son, can rally support in the South and help the party regain its traditional foothold there in the next election.

"He is our only hope," the source said.