Police in Bangkok on Sunday fired water cannon, rubber bullets and tear gas at protesters demanding that Prime Minister Prayut Chan-o-cha step down and the government be held accountable for its gross mismanagement of the Covid-19 pandemic.

The demonstrators clashed with police after some tried to dismantle barbed wire and metal barricades set up across Ratchadamoneon Nok Avenue in a bid to prevent them from marching to Government House.

A number of people were injured, and an area near Wat Ratchanadda near Democracy Monument was set up for health volunteers to help protesters injured during the police onslaught.

"Murderous government!," Panusaya "Rung" Sithijirawattanakul, a protest leader, tweeted after the use of force.

The marchers got as far as Nang Loeng intersection, where they displayed mock body bags and burned effigies of the prime minister.

At around 6.30pm, the Free Youth movement announced the end of the rally.

Earlier, cars and motorcycles joined a throng of demonstrators walking from Democracy Monument to Government House. Led by the Free Youth movement and its allies, the anti-government protesters were defying a ban on public gatherings by assembling at the monument on Ratchadamnoen Avenue where thousands attended a rally exactly one year ago.

Demonstrations began early last year by calling for the ouster of the former junta leader and the restoration of democracy, but have recently added the government's mismanagement of the coronavirus pandemic to their agendas.

"The government has been poor at managing the situation and if we don't do anything there will be no change," one protester, Kanyaporn Veeratat, 34, told Reuters.

Several mock body bags were brought to the site, symbolising the government's failure to curb the spread of the virus that has led to 3,341 deaths since the outbreak began early last year. 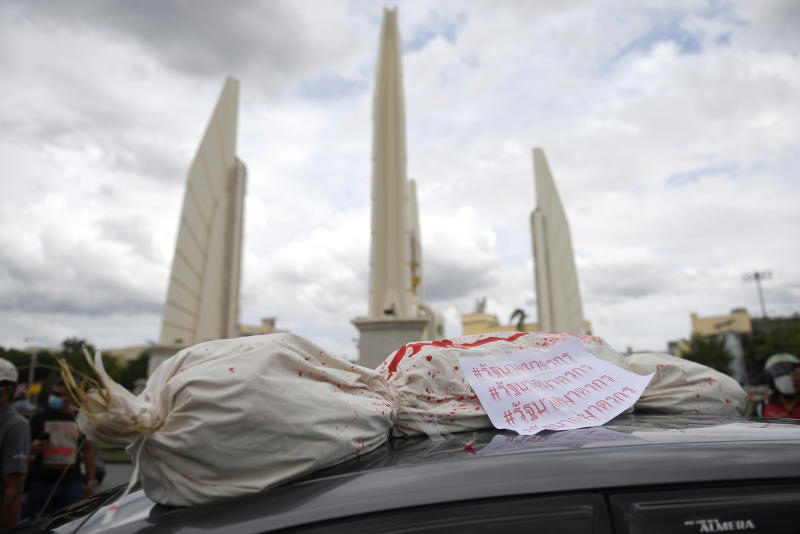 A mock body bag on a car is pictured at the rally site at Democracy Monument. (Reuters photo)

Car drivers and motorcyclists honked their horns as the organisers kicked off their march from the monument to the office of the prime minister.

The rally came in spite of the government's ban on assemblies of more than five people in Greater Bangkok in what it said was a bid to prevent further spread of the virus. The lockdown in 10 provinces, including the capital, has been extended to Aug 2, while another three provinces will come under the same restrictions on Tuesday.

More than 2,000 police were deployed to counter the rally.

Pol Maj Gen Piya Tawichai, the deputy commander of the Metropolitan Police Bureau, said a number of effigies of the prime minister had been seized at the monument to prevent the protesters from setting them on fire outside Government House.

The Finance Ministry slashed its 2021 economic growth forecast on Thursday to 1.3% from a previously predicted 2.3% expansion, the third such revision this year, as the tourism-dependent country fights its biggest Covid-19 outbreak to date.