ABOUT POLITICS: Bhumjaithai MP says he can no longer stand by and see party leader Anutin Charnvirakul treated as a scapegoat in coronavirus vaccine debacle v PM 'unfazed by rumours' of coalition partners jumping ship, but tests loyalty in cabinet meet

The vaccine issue has been turned into political ammunition for launching attacks by political opponents and Public Health Minister Anutin Charnvirakul is being unjustly held to account for something he has no power over, according to Bhumjaithai Party list MP and party registrar Supachai Jaisamut.

He said he is tired of having to watch Mr Anutin, his party boss, being blamed and accused of being the culprit behind the vaccine procurement fiasco.

Mr Supachai insisted that Mr Anutin had his power overseeing vaccine purchases and distribution taken away on April 9 when Prime Minister Prayut Chan-o-cha gave that power to an ad hoc panel.

But people still think that Mr Anutin is in charge of the monumental task of finding enough vaccines for the country, Mr Supachai said.

Mr Supachai's frustration, according to a political source, has shaken coalition unity at a time when the government has come under heavy fire for mismanaging Covid-19 problems, which include a shortage of vaccines.

As infections soar and fatalities hit new highs, the pressure on Gen Prayut keeps piling up with the crisis of faith in the premier worsening each passing day.

The source said even the smallest crack in government unity is being amplified by the reversal of its fortunes.

Unity will be put to the test in the forthcoming no-confidence debate which is expected to take place next month.

The opposition says the debate's main target will be Gen Prayut over his government's "spectacular" failure to contain the deadly pandemic.

If there is no significant improvement in the country's Covid-19 situation between now and the censure debate, Gen Prayut will be in danger of being alienated by coalition MPs, the source said.

This could be manifested in the form of many no-confidence votes being cast against Gen Prayut. If there are enough of them, he will be booted out of office and replaced.

The main opposition Pheu Thai Party has pledged to oust Gen Prayut by democratic means, although that means going back to the list of prime ministerial candidates submitted to parliament by political parties after the 2019 general election.

Candidates topping the list are Bhumjaithai Party leader Anutin Charnvirakul, former prime minister Abhisit Vejjajiva nominated by the Democrats, and Khunying Sudarat Keyuraphan, Chadchart Sittipunt and Chaikasem Nitisiri, all of whom were proposed by the Pheu Thai Party.

The source said it was unlikely coalition parties would ditch Gen Prayut after the censure debate as changing a prime minister in the middle of the Covid-19 battle would derail efforts to contain the virus.

Coalition MPs should know better than turn against one another when the government is beset by problems, the source added.

Mr Supachai, meanwhile, demanded that the Centre for Covid-19 Situation Administration (CCSA), which is headed by Gen Prayut, issue a public statement explaining that Mr Anutin was relieved of his responsibility concerning vaccines to set the record straight and ensure the Bhumjaithai leader is not made a scapegoat.

The Bhumjaithai MP said the vaccine procurement panel membership includes several operators of privately run hospitals, some of which are marketing and selling alternative vaccines. Mr Supachai asked whether their role on the panel amounted to a conflict of interest.

The MP added he was curious to know whether the panel will be able to deliver on the prime minister's goal of acquiring at least 100 million doses of vaccines before the year is out.

Mr Anutin last week found himself in the hot water after it was suggested he may have underestimated the extent of Covid-19 late last year, which led to AstraZeneca reportedly agreeing to supply the country with five million doses of its vaccine per month instead of 10 million monthly doses from June until the end of the year as the government has announced.

A leak has revealed the minister was supposedly aware of AstraZeneca's intention to supply five million doses monthly but did not seek to correct it until recently when it may have been too late to secure delivery of 10 million doses.

The government, meanwhile, gave its assurance there will be sufficient vaccines for the country.

Which of you are with me?

Prime Minister Prayut Chan-o-cha is unfazed by a rumour that some political parties in the coalition will jump ship and leave him in the lurch during the current crisis, a highly placed government source said. 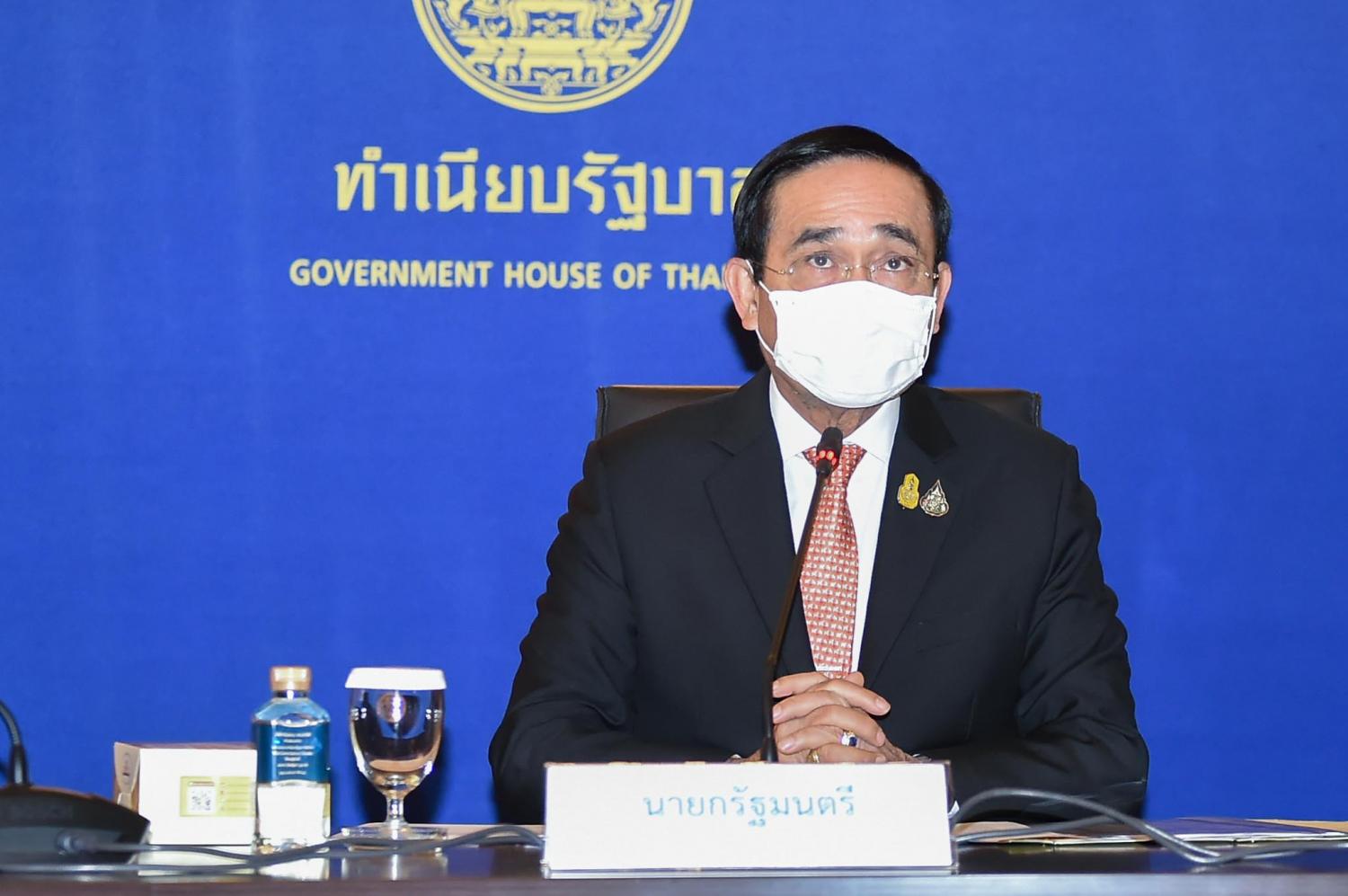 The rumour comes as the government appears to be in a precarious position struggling with difficulties besetting the country, particularly the Covid-19 pandemic.

During a cabinet meeting via video teleconference on Tuesday, Gen Prayut was unhappy when he looked at questions sent from reporters, the source said. The prime minister read out the questions to cabinet members who attended the meeting.

One question put to Gen Prayut was whether he has being made a scapegoat for the government's bungled vaccine procurement and rollout. Another question was whether some coalition parties tried to distance themselves from the mess brought on as a result of the pandemic, with the Democrat and Bhumjaithai parties being called on by government opponents to break away from the coalition, the source said.

Another question was whether the prime minister has found himself alone in dealing with the crisis, the source added.

"Look at these questions. How can I answer them? I am not working alone. We all work together. I don't think this is the time to play politics. If you want to abandon me, it is up to you. I will continue to do my job. I will not abandon you. But if you want to, so be it," the source quoted Gen Prayut as telling the cabinet meeting.

However, the source said the prime minister made the remarks to test the waters to gauge the reactions of coalition parties as the government has come under heavy criticism for its management of the pandemic.

Opposition parties, anti-government groups and some celebrities are urging the government to take responsibility for the crisis and step down.

"But the government will have to soldier on. It is wise not to change horses mid-race," the source said.

High daily caseloads are threatening to undermine public confidence in the embattled prime minister who has to pull out all the stops to steer the country through the crisis.

"If he succeeds in bringing the pandemic under control by February or March next year, he may decide to dissolve the House and call an election then," the source said.

"We never thought of abandoning the prime minister. Bhumjaithai remains steadfast in its support of the government. The party will stick with the government until the end of its tenure," said Mr Anutin, who also serves as public health minister.

Transport Minister and Bhumjaithai secretary-general Saksayam Chidchob also said that abandoning the government and the prime minister was not an option.

Democrat Party leader and Deputy Prime Minister Jurin Laksanawisit also said on Wednesday that he sympathised with the prime minister who has to shoulder the heavy responsibilities of dealing with a myriad of problems.

Asked if the party will remain in the government, Mr Jurin only said he'd already answered this question and there was no need to repeat himself.