Policemen stand their ground in a tense confrontation with protesters at the flyover near Victory Monument late Tuesday afternoon. (Photo: Nutthawat Wicheanbut)

The Civil Court has thrown out a petition jointly filed by a reporter and a photographer seeking to stop police from firing rubber bullets at protesters.

Thanapong Kerngaiboon, a reporter with Plus Seven news and Charnnarong Ua-udomchote, a photographer with The Matter, sought a court order to suspend the police's use of rubber bullets to contain protesters.

They claimed they were injured by rubber bullets which they alleged police fired at protesters without warning during a rally on July 18 in Bangkok. The two men were covering the protest.

The petition was filed with the court last Friday and asked for an injunction to temporarily bar police from shooting rubber bullets during protests pending the court's deliberation of the case.

The two also demanded compensation from the Royal Thai Police for injuries caused by the rubber bullets fired at them. 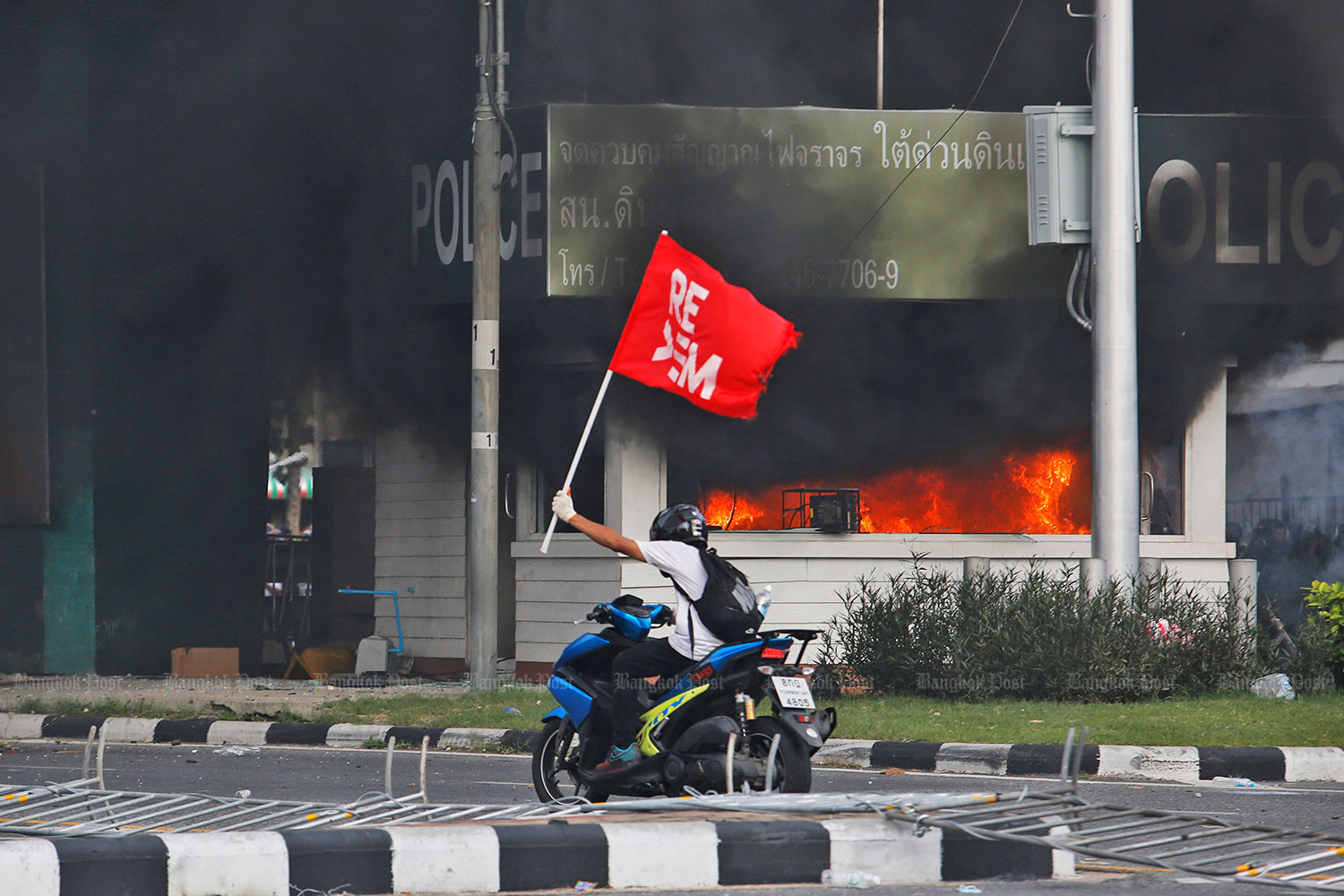 A motorcyclist holds a flag of the Redem (Restart Democracy) outside a police kiosk that was set ablaze at Din Daeng intersection. (Photo: Wichan Charoenkiatpakul)

Tuesday afternoon, anti-government protesters gathered again at Ratchaprasong intersection before moving along Phloenchit Road to Asok intersection and then to Asok Montri and Phetchaburi roads to Sino-Thai Engineering and Construction Plc.

At Sino-Thai, protest leaders slammed the giant company for having connections with Deputy Prime Minister and Public Health Minister Anutin Charnvirakul and giving financial support to the government. Sino-Thai is owned by Mr Anutin's family.

Then demonstrators headed for the residence of Thamanat Prompow, secretary-general of the ruling Palang Pracharath Party, on Rama IX Road.

On the way, some protestors confronted police who blocked access to Vibhavadi Rangsit Road near Din Daeng intersection, leading to the residence of the prime minister. Large fireworks were thrown at police during the standoff.

Organisers called off the protest in the late afternoon although around 100 protesters remained at Din Daeng intersection well into the early evening. A police kiosk was set on fire.

The protesters on Tuesday were believed to have been angered by the return to prison of several key protest leaders.

On Monday night, the Thanyaburi Court turned down a request for the release on bail of Parit "Penguin" Chiwarak and eight others charged in connection with a protest in front of the Region 1 Border Patrol Police headquarters in Pathum Thani's Khlong Luang district on Aug 2.