Prime Minister Prayut Chan-o-cha talks to cabinet ministers after the no-confidence vote on Saturday following the four-day censure debate, in which he and five other ministers were targeted.

Prime Minister Prayut Chan-o-cha remained in high spirits despite receiving the second fewest votes of confidence and the most no-confidence votes among six targets when MPs cast their votes on Saturday.

Gen Prayut along with five of his cabinet ministers comfortably won a vote of confidence from the House with no surprises in the wake of rumours about a plot by some key figures in the Palang Pracharath Party (PPRP) to unseat him in the no-confidence vote.

Emerging from the vote, Gen Prayut said he was contented with the outcome and would continue working. He also thanked the MPs for their support.

"My fist is big, so is my heart," he said as he pounded his chest twice with a fist.

"My morale is also high."

Asked if he would spend more time with PPRP MPs and coalition partners, Gen Prayut said everyone was welcome to talk to him about matters beneficial to the public.

In the midst of the four-day censure debate, there were reports about the move to topple him by some PPRP heavyweights and a number of renegade government MPs.

On the eve of the vote, Gen Prayut was said to have seen off the threat.

The prime minister also shrugged off observations about the number of votes he received from the MPs, saying he did not focus on the details.

"Did I survive [the censure motion]? If I did, it is done and over with," he said. 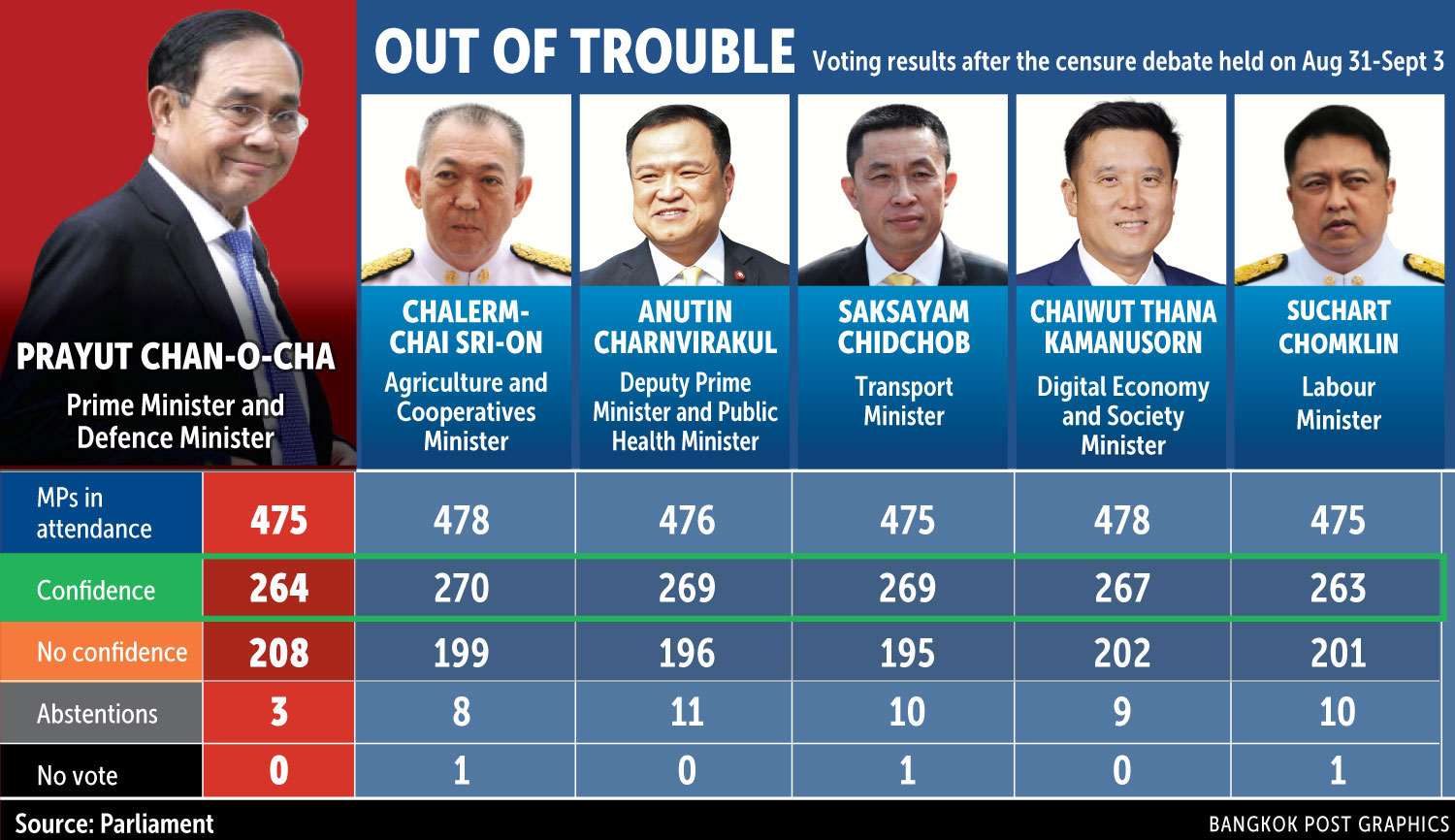 In previous censure debates, Gen Prayut sailed through with the most votes of confidence, with 274, both in February last year and February this year.

Agriculture Minister Chalermchai Sri-on of the Democrat Party won the most votes of confidence with 270-199 with eight abstentions while Chaiwut Thanakamanusorn, the new digital economy and society minister from the PPRP, received 267-202 with nine abstentions.

Deputy Prime Minister and Public Health Minister Anutin Charnvirakul received 269-196 with 11 abstentions. Transport Minister Saksayam Chidchob got 269-195 votes with 10 abstentions. Both were from the Bhumjaithai Party.

Mr Anutin thanked the MPs for their support while declining to discuss a possible cabinet reshuffle. He said the cabinet shake-up was the prime minister's job.

Mr Chalermchai said the outcome reflected unity in the coalition government and for the government as a whole.

He added that two Democrat MPs who failed to toe the party line were instructed to submit an explanation.

Meanwhile, seven Pheu Thai MPs broke ranks with the party in the vote by abstaining.

The Move Forward Party also saw six renegade MPs who voted against the party stance with Kharom Polpornklang casting a vote of confidence for Gen Prayut and the five cabinet ministers.