ABOUT POLITICS: Cabinet purge and agency reallocations are putting the Prayut-Prawit friendship to the ultimate test v Pirapan Salirathavibhaga is said not to be best pleased at reception given to him by new PPRP colleagues

The simmering tension between two of the country's most powerful politicians and former brothers-in-arms may be coming to a head.

The fraternal ties that bind Prime Minister Prayut Chan-o-cha and Deputy Prime Minister Prawit Wongsuwon have stood the test of time. However, in light of recent political developments, this bond may face its biggest test yet.

Gen Prayut has trusted Gen Prawit, his most senior comrade in the Burapha Phayak military clique, whom he has always held in the highest esteem.

Much of the success of the 2014 coup that toppled the Pheu Thai Party-led administration was down to Gen Prawit, Gen Prayut and another prominent Burapha Phayak figure, Interior Minister Anupong Paojinda. They were credited with working behind the scenes to cobble up a government with Gen Prayut as prime minister.

The three "brothers" have since occupied pinnacle positions in the corridors of power. According to one source, when Gen Prawit talked, Gen Prayut always listened.

Gen Prawit sees to it that political affairs and wrangling are taken care of and keeps tabs on politicians in the ruling Palang Pracharath Party (PPRP) which he leads, freeing Gen Prayut to run the government.

However, Gen Prayut's "rock" may be showing signs of crumbling after the prime minister ruffled Gen Prawit's feathers, not once but twice.

Even though the two men have categorically denied falling out, an observer noted the dismissal last month of Capt Thamanat Prompow as deputy agriculture minister may have left the first visible crack in their much-touted relationship.

Despite Gen Prawit's pledge to stand by Gen Prayut until "death do us part", the humiliating removal of Capt Thamanat, Gen Prawit's closest and most trusted aide, from the cabinet must have taken deputy premier aback, the observer said.

It may also have made Gen Prawit realise for the first time that Gen Prayut will not think twice about exerting control and punishing any politician who threatens his leadership.

Capt Thamanat was accused of conspiring with MPs from a faction in the PPRP and small parties to vote against Gen Prayut in the last no-confidence debate.

Given the circumstances, the observer said it was natural to expect Gen Prawit to also take strong punitive actions against Capt Thamanat for plotting to stage a mutiny against the prime minister.

However, the fact that Capt Thamanat is still sitting comfortably as PPRP secretary-general has led many to wonder whether Gen Prawit was offended that Gen Prayut came down hard on his protege, subsequently disrupting the PPRP internally.

Gen Prawit may also feel he has lost face, that he should have at least been consulted and allowed to decide a suitable punishment for Capt Thamanat, according to the observer.

It was reported Gen Prawit wanted to keep Capt Thamanat in the party to help with campaigning, as the next election could be called next year if a speculated dissolution of the House occurs.

The prime minister may opt to dissolve the House before the government's term expires in two years after the charter amendment process of reverting the current single-ballot voting system to a dual-ballot one, is complete and the related organic laws are duly updated.

Another Prawit-Prayut spat was also thought to have played out last week when Gen Prayut signed an order handing back power to supervise four agencies under the Agriculture Ministry to the Democrats.

It marked a reversal of another order issued less than 24 hours prior, which put their supervision in the hands of Gen Prawit.

Procedure dictates that the agencies be returned to Agriculture Minister Chalermchai Sri-on, who concurrently serves as Democrat secretary-general, for redistribution to other deputies.

The observer said Gen Prawit may have deemed it necessary to maintain a grip on the agencies with the expectation that if and when the PPRP finds Capt Thamanat's replacement, that person could then pick up where his or her predecessor left off.

By releasing the rescinding order, Gen Prayut managed to pacify brewing disgruntlement among the Democrats. But in yanking the agencies from Gen Prawit's hands, the prime minister may once again have left his big brother in a foul mood. 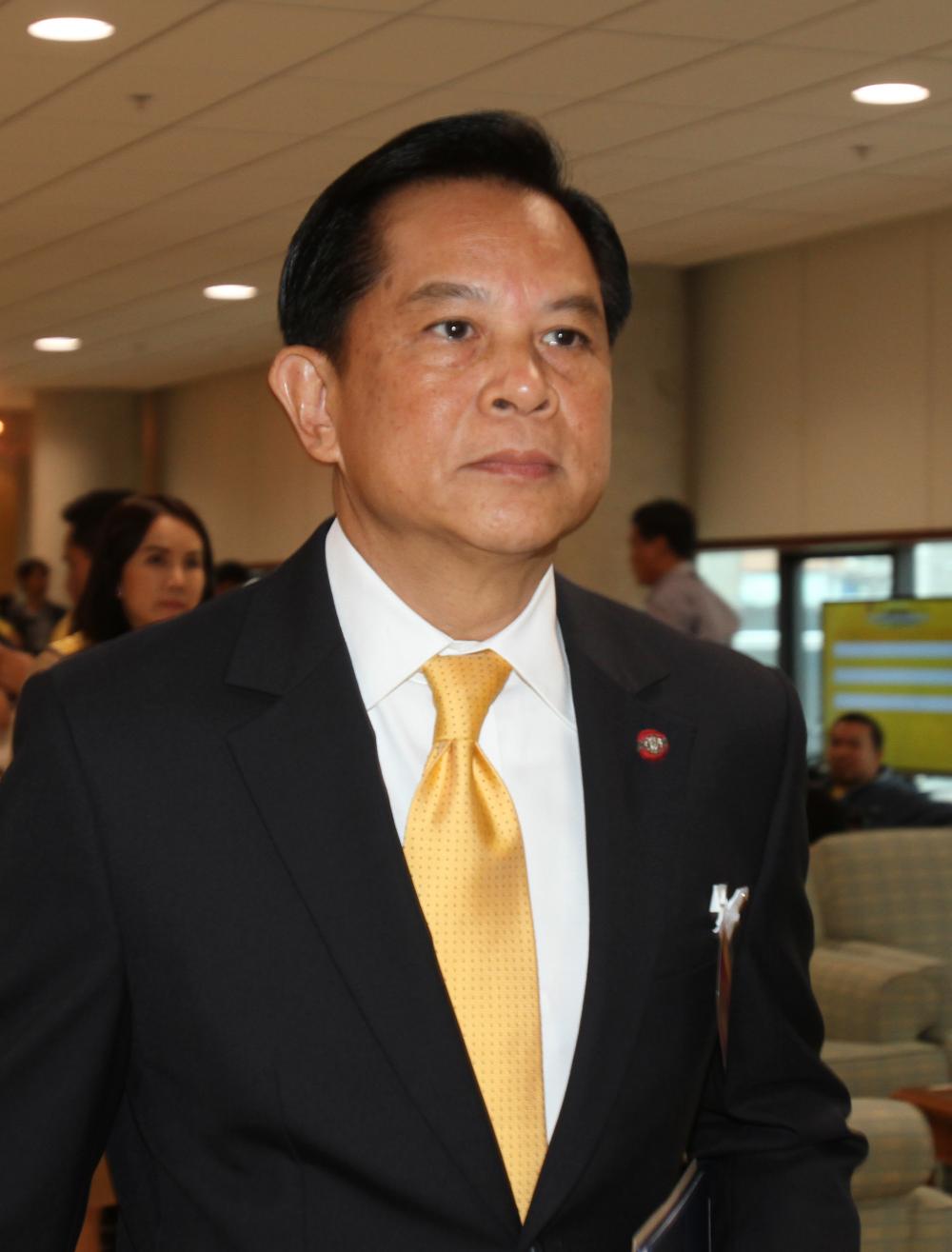 Pirapan Salirathavibhaga, the newly appointed adviser to Palang Pracharath (PPRP) leader Prawit Wongsuwon, has already ruffled a few feathers in the ruling party, and he has not even started yet.

Rumours that he is there to balance out power within the party and is being eyed as a potential candidate for premier are not going down well with some party members.

PPRP MP for Bangkok, Sira Jenjaka, reacted strongly to the talk, described Mr Pirapan, despite his political experience with the Democrats, as a "novice monk" who must "rise through the ranks".

Mr Pirapan, a five-time MP with the Democrat Party and a former justice minister during the Abhisit Vejjajiva government, jumped ship in late 2019 and went to work for the government serving as Prime Minister Prayut Chan-o-cha's adviser.

His present gig as the PPRP leader's adviser comes amid lingering speculation over ties between Gen Prawit and Gen Prayut, as well as the controversy surrounding Gen Prayut's eight-year tenure.

Some political observers view Mr Pirapan's new role in the ruling party as an attempt by some party heavyweights to balance out power in light of the growing clout PPRP secretary-general Capt Thamanat Prompow wields.

Capt Thamanat, while stripped of his cabinet post for an alleged attempt to overthrow Gen Prayut during the last censure debate, is believed to retain a firm hold on the party.

Mr Pirapan is also said to be one of the two backup choices in case Gen Prayut's term ends in August next year. Gen Prayut was the PPRP's sole candidate for prime minister in the 2019 poll, despite not being a party member.

Under the constitution, no one can serve more than eight years as prime minister, regardless of whether the terms are served back-to-back. Gen Prayut's critics insist the premier who assumed office following the 2014 coup, will have served out his eight-year term by August next year.

According to a source in the PPRP, Mr Pirapan is said to be very offended by Mr Sira's remark, even though Gen Prawit has intervened and vowed to quell discontent among party members.

"He may feel like he's been abandoned by someone who was supposed to protect him. And as if that wasn't enough the very same person had just set those people on him," the source said, described how Mr Pirapan might be feeling.

Mr Pirapan parted ways with the Democrats in early December 2019, a decision that also ended his time as a party-list MP. He did not give a reason for his abrupt exit, which came months after losing to Jurin Laksanawisit in the party leadership contest in May.

According to the PPRP source, Mr Pirapan was believed to have turned his back on the Democrats because he was approached to take the helm at the PPRP, replacing Uttama Savanayana who was then party leader.

At the time, changes in the PPRP leadership had been widely speculated after Gen Prawit made an appearance at a party seminar in Nakhon Ratchasima's Wang Nam Khieo district in July 2019.

The move was seen as a signal of his next political move, but Mr Pirapan came into the picture because the PPRP wanted a civilian as the party chief to avoid being seen as a pro-military party.

However, after the purge of Mr Uttama and three others in the so-called Four Boys group, the PPRP leadership was handed to Gen Prawit, who was then the party chief strategist in an uncontested race.

At that time, key party figures were reportedly told Gen Prawit's stay as party head would be temporary and that he would be warming the seat for Mr Pirapan.

More than a year has passed since the big party revamp, but Gen Prawit remains as leader, having apparently grabbed a firm hold of the PPRP, according to the source.

However, Digital Economy and Society Minister, Chaiwut Thanakamanusorn, has downplayed any animosity towards Mr Pirapan, saying any displeasure will be dealt with and party members will come to understand Mr Pirapan's role in the PPRP.

According to Mr Chaiwut, who is also a PPRP executive, senior party figures feel Mr Pirapan is cut out for his role in the PPRP as he did a remarkable job as the prime minister's political aide.