Policies must focus on quality of life

The government should improve the social welfare of Bangkok residents and maximise the use of urban spaces to spur economic activities, says former transport minister Chadchart Sittipunt.

This would help to make the capital a more liveable city, he said.

Speaking at a forum called "Unleashing the Future: A Glimpse into 2022 and Beyond", Mr Chadchart said despite its status as one of the world's most visited cities -- the capital topped Mastercard's Global Destination Cities Index in 2019 -- Bangkok doesn't rank as high in terms of liveability.

According to the Economist Intelligence Unit's (EIU) Liveability Index 2021, Bangkok ranked 98th out of 140 world cities -- meaning while many people would love to visit Thailand for a short visit, most aren't likely to consider moving here long-term, Mr Chadchart said.

"What I want to see is a Bangkok that is liveable for all," he said.

He also said people should be at the centre of the city's policies, stressing the government needs to take into account people's needs and improve basic infrastructure, which is still lacking in many areas.

"Furthermore, we need to promote the use of cloud computing to move Bangkok into the digital era. We won't need to go to the office in the future," he added. 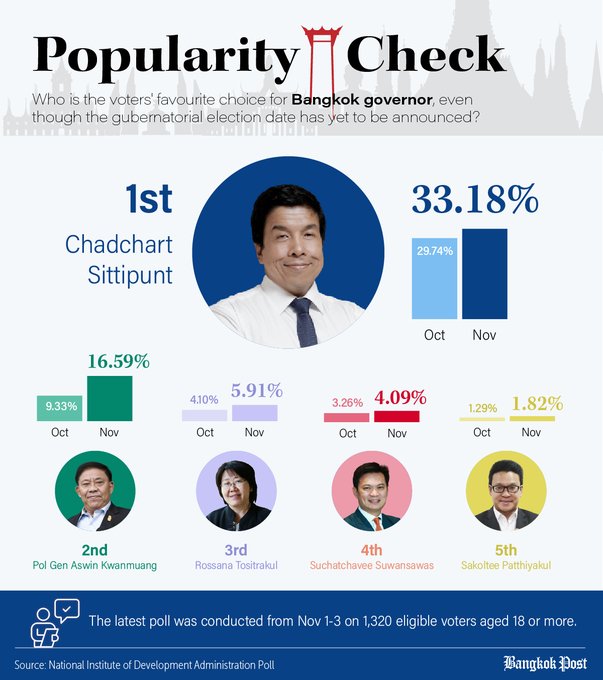 Acknowledging the fact that Bangkok will be hit by climate change, the former minister said the time is ripe for the capital to "go green".

In addition, he urged authorities to optimise the use of city spaces to spur economic growth and provide opportunities for young talents to thrive.

"It's not too late to make Bangkok a city for all. The city's future isn't dependent on the government and politicians, as change begins with us. We can make the city better," he said.