Pitchaya 'Panda' Pocharasadorn (second from left) chats with a resident while on the tambon administrative organisation (TAO) election campaign trail.

The term "katoey" or transvestite may have been used as reference to Pitchaya Pocharasadorn for the wrong reason but it is what propelled her to a resounding victory in the Nov 28 tambon administrative organisation election in Nakhon Phanom.

"I have to thank whoever tried to taunt me with that description," said the newly-elected chairman of the Tha Khor TAO.

She won 2,954 votes, defeating her predecessor by 1,510 votes, a significant win by TAO standards.

Ms Pitchaya, nicknamed "Panda", 47, has battled all her life to assert her identity as a proud katoey who can make a difference to local politics and be of service to communities.

Being branded a katoey was a test she could not afford to flunk. Opponents kept badgering her with suggestions that belittled the qualifications of a katoey as a local leader. 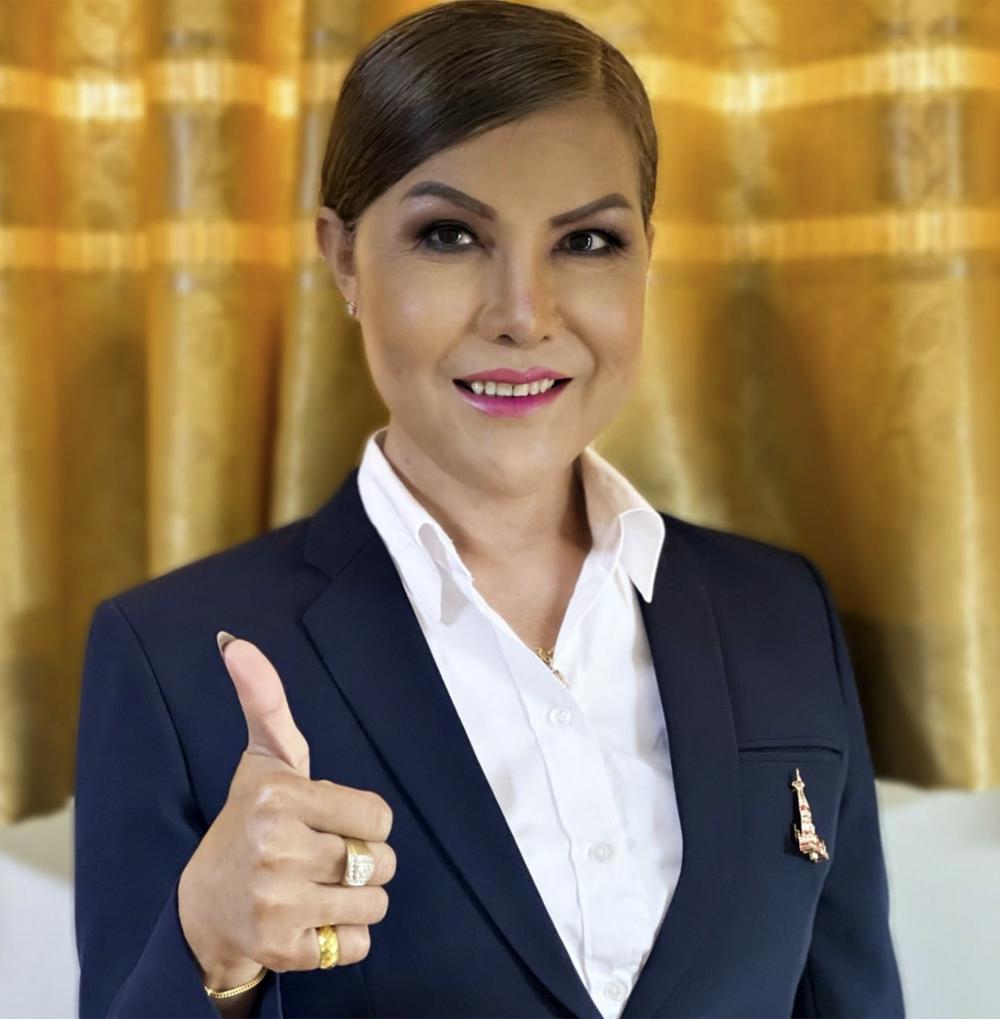 "I have to thank whoever tried to taunt me with that ['katoey'] description." — Pitchaya Pocharasadorn, the newly-elected chairman of the Tha Khor Tao

"I had to overcome the disparagement. It's a matter of flipping the coin and turning the negativity into energy to drive me forward," Ms Pitchaya said.

If critics tried to put her down with vulgarity, she'd match it with humility. "I'll lead the TAO with a glass half-full. I think I can get more input through listening," she said.

Ms Pitchaya is no novice in politics. Long before being swept into the TAO chairmanship, she started as a public health volunteer in 2004 before rising to the top as tambon Tha Khor health volunteer chair.

Next, she was made inspector attached to the kamnan local leader, a post that lasted three years.

Throughout her stints as health volunteer and inspector, she learned first-hand about residents' needs and their grievances while becoming aware of every nook and cranny of local politics.

"A devoted politician needs to be accessible and dependable for the people and not take advantage of them," Ms Pitchaya said.

The TAO polls were important groundwork for bigger elections including the general election. The Nov 28 race was the first TAO contest to be held in almost eight years since the May 2014 coup.

Close to 5,300 seats as TAO chairs and 56,641 TAO members were up for grab across the country except in Bangkok.

Before the tenure of chairs and members expired in May, 2018, the National Council for Peace and Order (NPCO) ordered the incumbents to carry on working in an acting capacity until a new poll was called.

The Nov 28 contest was the third local election to be organised, following the provincial administrative organisation (PAO) polls on Dec 20 last year and the municipal elections on March 24.

Tambon Tha Khor of Nakhon Phanom's Muang district spans 11 villages. It is among 81 tambons across 12 districts in the far northeastern province.

The local elections in the province mostly pitted candidates from the Pheu Thai Party against those fielded by the Bhumjaithai Party.

However, Ms Pitchaya broke into the election scene running as an independent.

In campaigning for votes, she thought she was facing a double-whammy, first for prejudice against katoey and second, for lacking the support of an established political party.

Her predecessor was also a four-time chair with a solid political footing.

"Sexual orientation and biases aside, it's the perseverance and a proven dedication to serve folks that won the day," she said.

When it comes to the business of managing the TAO affairs and seeing to it that local development projects can materialise, it is a genderless undertaking.

"Really, there's no division between the sexes there. It's something I want society to accept," she added.

She hoped her triumph in the Nov 23 polls would lend impetus to a growing collective force to shatter the glass ceiling that keeps LGBT people from rising through political echelons.

The performance of katoey politicians, her included, was being monitored on social media which provides a window into what they have done for the locals and how hard they have worked to earn people's trust.

Ms Pitchaya said she believed voters have moved past a candidate's sexuality. The question on everyone's lips is, "Can we rely on them?"

The candidates who rarely showed their faces stand no chance of getting elected.

Helming the Tha Khor TAO, she intends to pick up where her predecessor had left off by pushing development schemes including the promotion of local tourism and keeping alive old traditions and customs.

The tambon was once part of an ancient city with archaeological sites that have been unearthed.

The tambon also is endowed with natural resources that are under-utilised. She is looking to tap them through a plan that benefits the locals' way of life.

She is also on call to fix problems for people, from taps that run dry to assembling a rescue operation.

Regardless of her busy schedule, she is studying for her master's degree in public administration at the Nakhon Phanom University.

Ms Pitchaya's role model is Supachai Phosu, a Bhumjaithai MP for Nakhon Phanom who remains a popular figure in the province.

Before she decided to run as an independent candidate, the Pheu Thai politicians also gave her advice. She instructed her team not to bicker with any parties or politicians as their priority was to win over people.

"We knocked on the door of every house. We're new on the scene and so we must work twice as harder as other people.

"I firmly believe that if we do good deed, society will be on our side. I canvassed for vote on my own two feet and with my own money," she said.

She faced some daunting questions even from friends who doubted her commitment. They were wondering if she considered herself educated or rich enough to seek the TAO's top spot.

"They were saying I probably bit off more than I could chew," she said.

She was also approached by a rival candidate to give up the competition and instead be his deputy if he won the TAO chair race.

"But if I stayed in someone else's shadow, there'd be no change. Tha Khor would be the same.

"There was big question mark for some people who dreaded the idea of having a katoey (TAO) leader. That was the wall we needed to break," Ms Pitchaya said.