ABOUT POLITICS: Some political observers believe the PPRP's stunning defeat in a Bangkok by-election doesn't spell doom and gloom for PM v Speculation is running rife as to whom the prime minister will turn to if ruling party ties are severed

The humiliating defeat for the ruling Palang Pracharath Party (PPRP) in the Jan 30 by-election in Bangkok's Constituency 9 may have, according to critics, confirmed the plunging popularity of both the PPRP and Prime Minister Prayut Chan-o-cha.

However, some analysts did not see it that way. Rather, they thought the spectacular PPRP loss spoke of the strength of support which remains intact for Gen Prayut.

In the 2019 general election, all the major parties garnered more votes than they did on Jan 30.

The by-election was to fill the void left by Sira who was stripped of his MP status by the Constitutional Court last year. He was judged ineligible to contest the 2019 election on account of a fraud conviction handed down by the Pathumwan District Court in 1995 along with an eight-month jail term.

A PPRP defeat became apparent soon after results from the first few polling stations came trickling in. Already, they were ominous signs for Ms Saralrasmi as she was quickly relegated to third and eventually fourth place.

On top was Mr Surachart, who was well on his way to winning the constituency.

Also, the political watchers were quick to crunch the figures and float an array of scenarios and outlooks, as well as political implications for the PPRP, Pheu Thai and the MFP.

Leading political scientists agreed the by-election outcome did not bode well for the PPRP or Gen Prayut, whom some reckoned had passed his sell-by date and was no longer a marketable brand in politics.

Others believed Gen Prayut may still have political value although he would not "sell" if he continued to be around or was thought to be tied to the PPRP, a party in a current state of decline.

The party's diminishing popularity took a sharp turn for the worse recently when the government came under fire for failing to curtail soaring prices which drove up the price of some other meats. At the same time, skyrocketing fuel prices also sent the cost of essential commodities up.

The factional PPRP has also suffered a longstanding internal feud which came to a head when the party expelled 21 MPs from the group controlled by the party's former secretary-general, Capt Thamanat Prompow.

The group was accused of threatening to cause problems if the party refused its demand for a radical internal revamp.

Political scientists said the PPRP was in bad shape and may not be salvageable. It may well prove a liability for Gen Prayut who could regain his popularity if he had a new party to fall back on.

But getting rid of the PPRP would not be practical or even legal. A sensible avenue that is open to PPRP executives is for them to rebrand the party by means of internal restructuring and showing everyone they are in charge of the party and are capable and ready to get down to work. The immediate priorities are to curb soaring consumer prices and be seen to unite the party after the departure of the Thamanat faction.

For some time, Deputy Prime Minister Prawit Wongsuwon, who is also the PPRP leader, had come down on Capt Thamanat's side prior to the purge of his faction.

Capt Thamanat could not shrug off his alleged failed attempt to oust Gen Prayut by plotting to vote against the premier in last year's censure debate.

Despite this alleged brazen act, he remained by Gen Prawit's side, much to Gen Prayut's chagrin.

Observers said many supporters of Gen Prayut were displeased that both Gen Prawit and Capt Thamanat were not treating the prime minister with the respect he deserved.

Gen Prayut and the PPRP, according to the observers, were not closely tied to each other. His unresolved feud with Capt Thamanat even stretched the gulf between them further. For that reason, some voters in Constituency 9 might have boycotted the by-election to teach the PPRP a lesson.

The PPRP sifted through the poll result and was alarmed to find it had lost more than 20,000 votes compared to the 2019 general election. It figured many supporters did not go to the polls this time around.

The observers said there was truth in the theory that many voters stayed away, which could mean quite a few people were still supportive of Gen Prayut.

The observers noted the PPRP itself did not appear determined to win in the constituency. No party stalwarts had campaigned to rally support for Ms Saralrasmi.

On the other hand, Mr Surachart has always maintained close contact with residents through his work for local communities, which made his by-election victory not exactly unexpected, according to the observers.

A change of bedfellows?

The Ruam Thai Sang Chart (Uniting Thais to Build the Nation) Party has been around for almost a year, but attracted no serious attention until early this week, according to observers. 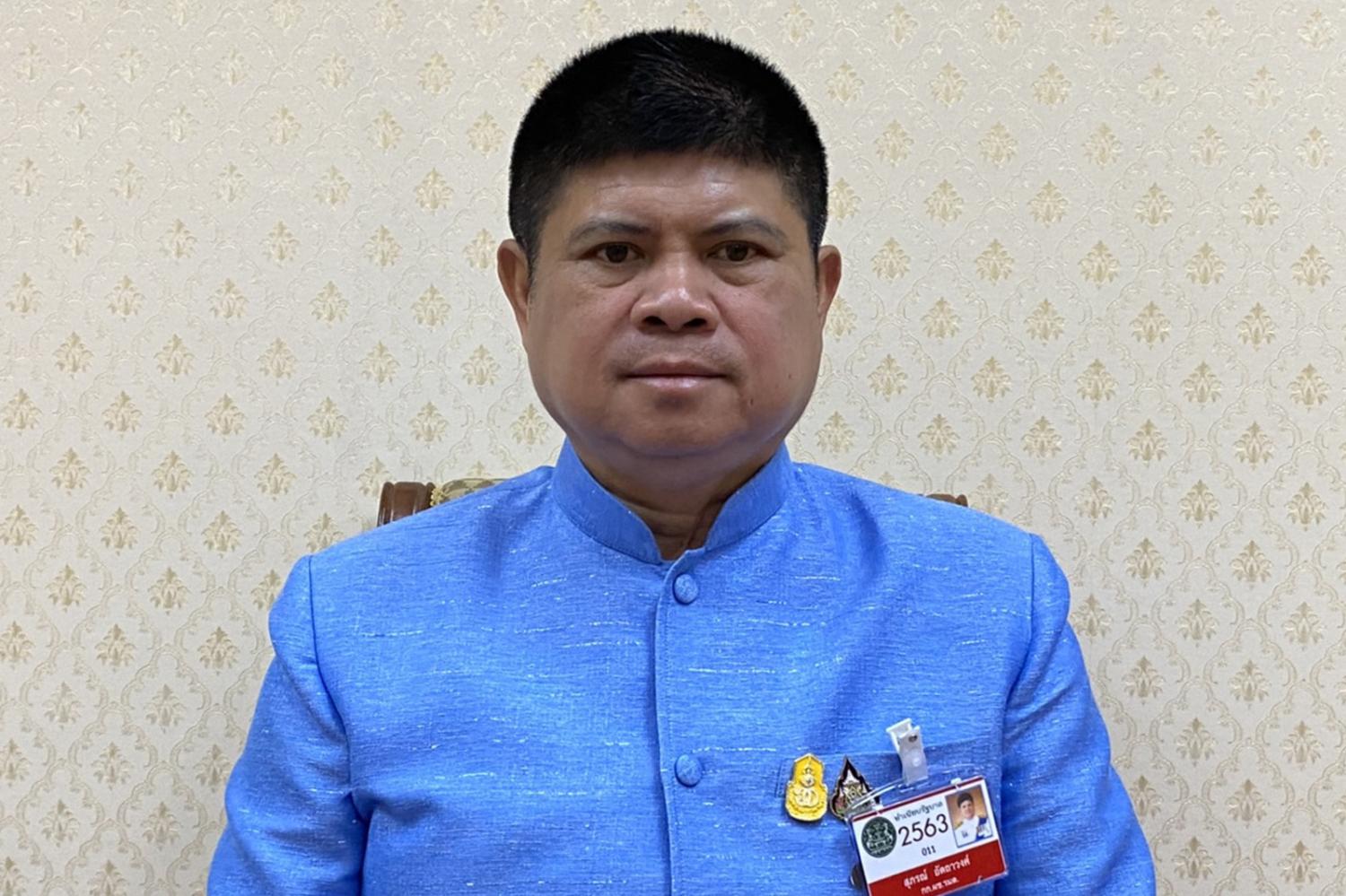 The party first surfaced in March last year when reports emerged that a "spare party" was registered for the ruling Palang Pracharath Party (PPRP) in case a snap election was called and something went wrong in the PPRP.

At the time, a referendum bill was being scrutinised in parliament and there were concerns that if it failed to clear the House, the government, which sponsored the bill, would have to either resign or dissolve the House.

Under such a scenario, a fresh election would have had to be organised and the PPRP might have needed a sister party to help increase its prospects of capturing as many House seats as possible.

This scenario did not come to pass and the "spare party" faded into the background until Seksakol "Rambo Isan" Atthawong, a close aide of Prime Minister Prayut Chan-o-cha, announced on Feb 7 his defection from the ruling PPRP to Ruam Thai Sang Chart.

Mr Seksakol's move has attracted wide attention because the former core member of the red-shirt movement openly discussed the possibility of the ruling PPRP and Gen Prayut eventually parting ways.

Even though Gen Prayut is not a member, the premier relies on the PPRP for political support.

According to Mr Seksakol, the Ruam Thai Sang Chart Party would be an exit strategy if the PPRP, led by Deputy Prime Minister Prawit Wongsuwon, chose not to nominate Gen Prayut as a prime ministerial candidate after the next general election.

Mr Seksakol, who has become one of Gen Prayut's staunchest allies, pointed out that he could not leave anything to chance in the wake of the alleged plot to unseat Gen Prayut in last year's no-confidence debate.

The party was registered in March last year and its name came from a phrase created by Gen Prayut himself, according to Mr Seksakol.

"It depends on Gen Prayut whether he wants to use this party. But Ruam Thai Sang Chart was established as an alternative if we have to part ways with the PPRP," said Mr Seksakol.

According to observers, it is believed Ruam Thai Sang Chart will become Gen Prayut's political home. The premier is assumed to have thrown his weight behind the party because he has not denied the suggestion that he has had enough of the PPRP and is ready to look elsewhere for support.

When asked to comment on Ruam Thai Sang Chart and other parties which have vowed to back him, the prime minister was quoted as saying: "It's their business. I think there are a hundred of them around."

Some political observers agree that Gen Prayut has more than one party in tow and it is possible that Ruam Thai Sang Chart is just a distraction.

They base their theory on the recent formation of the Thai Sang San (Creative Thailand) Party, which was established last December.

Key figures speculated to defect from the PPRP to Thai Sang San are Pirapan Salira­thavibhaga, an adviser to the prime minister, and former national police chief Pol Gen Chakthip Chaijinda.

Pol Gen Chakthip has reportedly looked to the new party since his bid to run for Bangkok governor under the PPRP banner was allegedly blocked by former party secretary-general Capt Thamanat Prompow.

It is reported that Pol Gen Chakthip has been recruiting election candidates for the party and is believed to have secured potential runners in several northeastern provinces.

With a widening rift in the PPRP and shaky relations between Gen Prayut and Gen Prawit, it is highly likely that Gen Prayut will walk away from the PPRP sooner rather than later, according to a source close to the ruling party who declined to be named.

When it is time for Gen Prayut to bid farewell to the PPRP, the premier is likely to opt for the Thai Sang San Party, not the Ruam Thai Sang Chart, according to the source.