Strategic voting may be a decisive factor

The May 22 Bangkok governor election promises to be a fiercely contested race coming nine years since the last poll as contenders' policy platforms and voters' preference for individual candidates are regarded as key factors that will determine the outcome, academics say.

The previous poll was held on March 3, 2013, a year before the coup, engineered by the National Council for Peace and Order (NCPO), ousted the Pheu Thai-led government.

The NCPO later installed Pol Gen Aswin Kwanmuang as city governor. He stepped down on March 24 to prepare to compete in the governor poll.

Wanwichit Boonprong, a political science lecturer at Rangsit University, told the Bangkok Post that Bangkok voters can be divided into three groups. 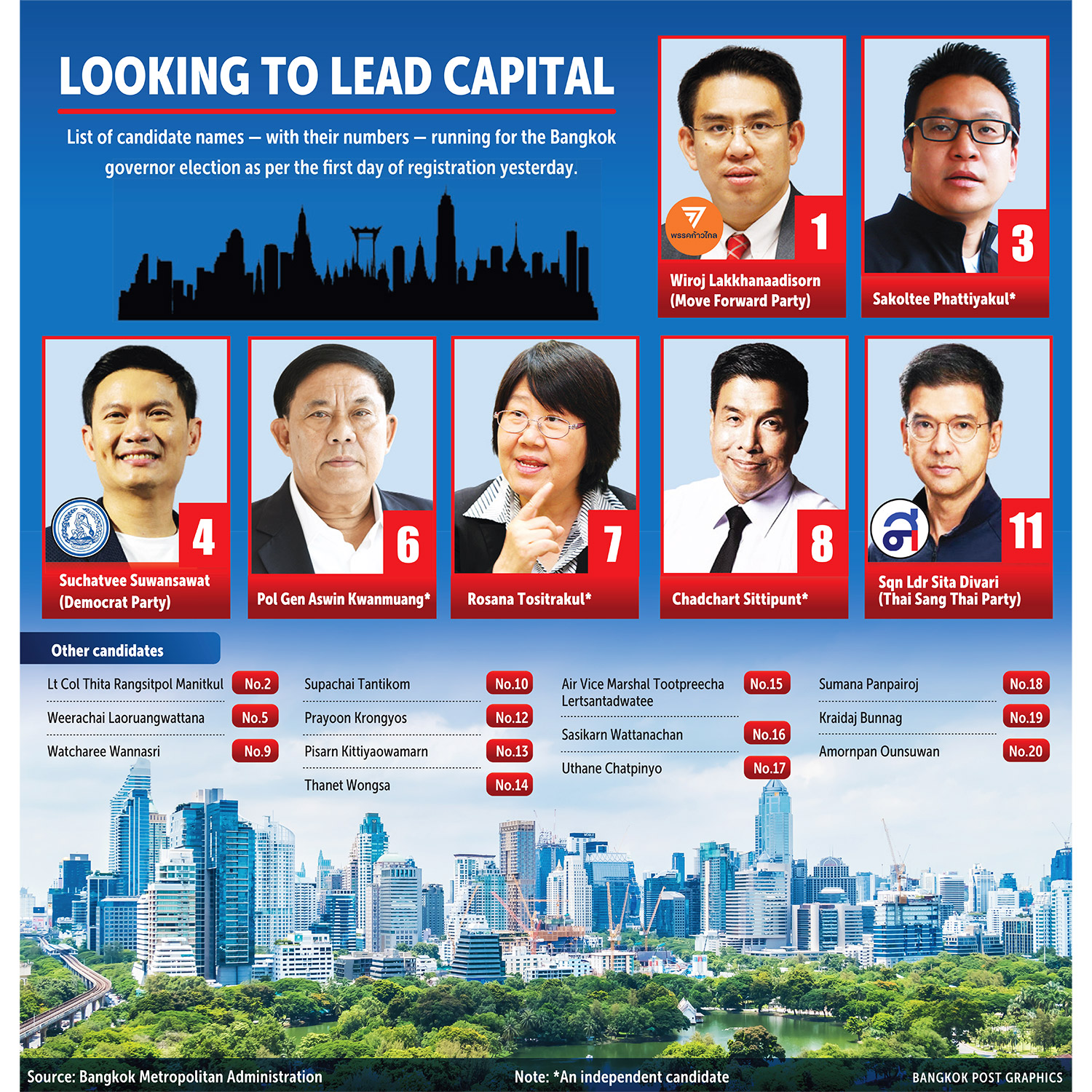 The first, accounting for one in two voters, shows a preference for individual candidates. The second, comprising around 20% of voters, will cast their votes based on their political ideologies, skewing either conservative or liberal.

The third group, which accounts for 30% of those eligible to cast ballots, will engage in "strategic voting", meaning they will not vote for their most preferred candidate if the candidate has little chance of winning, Mr Wanwichit said.

Instead, they will vote for their second favourite to prevent a candidate they don't like from winning, he said.

Mr Wanwichit said he believed both Chadchart Sittipunt, an independent who enjoys the backing of young voters, and Pol Gen Aswin, who has established connections with City Hall officials, will have an advantage.

"Most importantly, many Bangkok residents are now attaching importance to the individuality of each candidate rather than the reputation of the political parties they belong to," he said. "So we can see many running as independents."

In the first stage of poll campaigns, candidates will focus on presenting their policy pledges with the aid of their supporters, but the run-up to the poll may also be a crucial period as some candidates may resort to mud-slinging to discredit their rivals.

Jade Donavanik, a former adviser to the Constitution Drafting Committee and president of the faculty of law at the College of Asian Scholars in Khon Kaen, said candidates' credentials and policies will help define their poll success.

How well candidates communicate with and impress voters is also a key factor, Mr Jade said, adding that young voters tend to vote for candidates they think can identify with them.

"I think there are three contenders who are neck and neck in the race -- Pol Gen Aswin, who previously served as city governor; Mr Chadchart, who once worked and fared well under Pheu Thai; and Mr Suchatvee [Suwansawat], who runs for the governorship under the banner of the Democrat Party," Mr Jade said.

Twenty candidates registered to run in the governor race on the first day of registration at City Hall 2 in Din Daeng district on Thursday.

Mr Chadchart arrived on a bicycle at 6am. His supporters were there about 30 minutes earlier and they included former Bangkok governor Bhichit Rattakul.

Mr Chadchart said it was his first time contesting the race. He arrived on his bicycle because he wants Bangkok to be a green city, he said.

Candidate Sqn Ldr Sita Divari, of the Thai Sang Thai Party, arrived with his team of Bangkok council candidates in an air-conditioned bus. He said if he wins, he will improve the capital's flood drainage system and traffic management.

Pol Gen Aswin and his former deputy governor, Sakoltee Phattiyakul, turned up separately. Both are independent candidates. Pol Gen Aswin said the pandemic had halted many projects he wanted to see through to the end.

Democrat candidate Suchatvee Suwansawat said he would introduce Wi-Fi throughout the capital.