Success on Sunday could augur well for general election

An election victory for independent governor candidate Chadchart Sittipunt on Sunday could ease intense political polarisation in the next general election, says a political scientist.

A triumph for Mr Chadchart could have far-reaching political implications as it might bridge the divide between government supporters and opponents, Stithorn Thananithichot, director of the Office of Innovation for Democracy at King Prajadhipok's Institute, told the Bangkok Post.

Mr Chadchart, a former transport minister under the Yingluck Shinawatra administration, has long been associated with the Pheu Thai Party. When he announced his bid to run as an independent candidate for the gubernatorial election, he was seen as shedding his association with the main opposition party.

By doing so, Mr Chadchart caught the attention of a wider section of voters, including some government supporters who were left to focus on his abilities and qualifications as a potential governor rather than what party he would otherwise have to answer to. 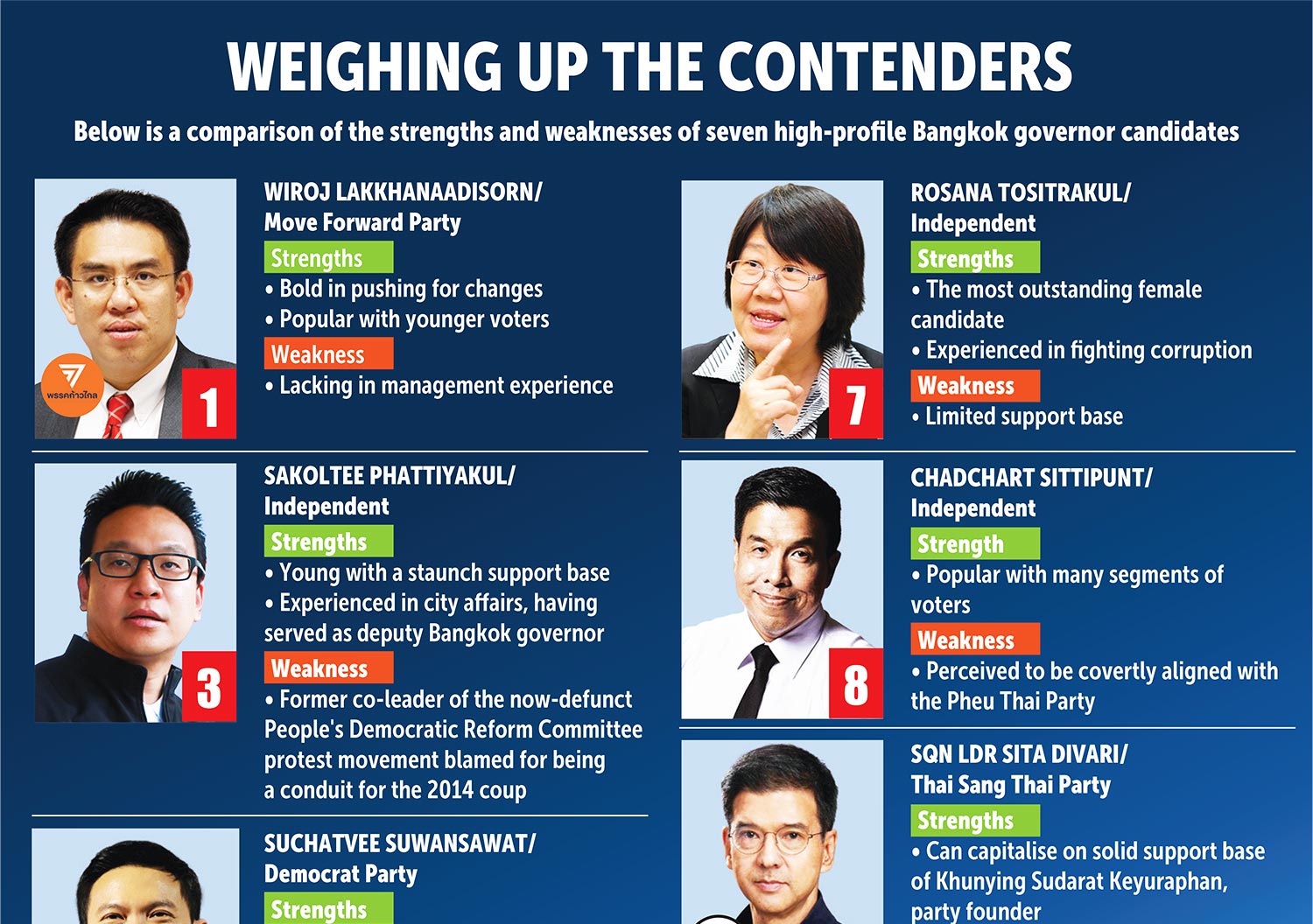 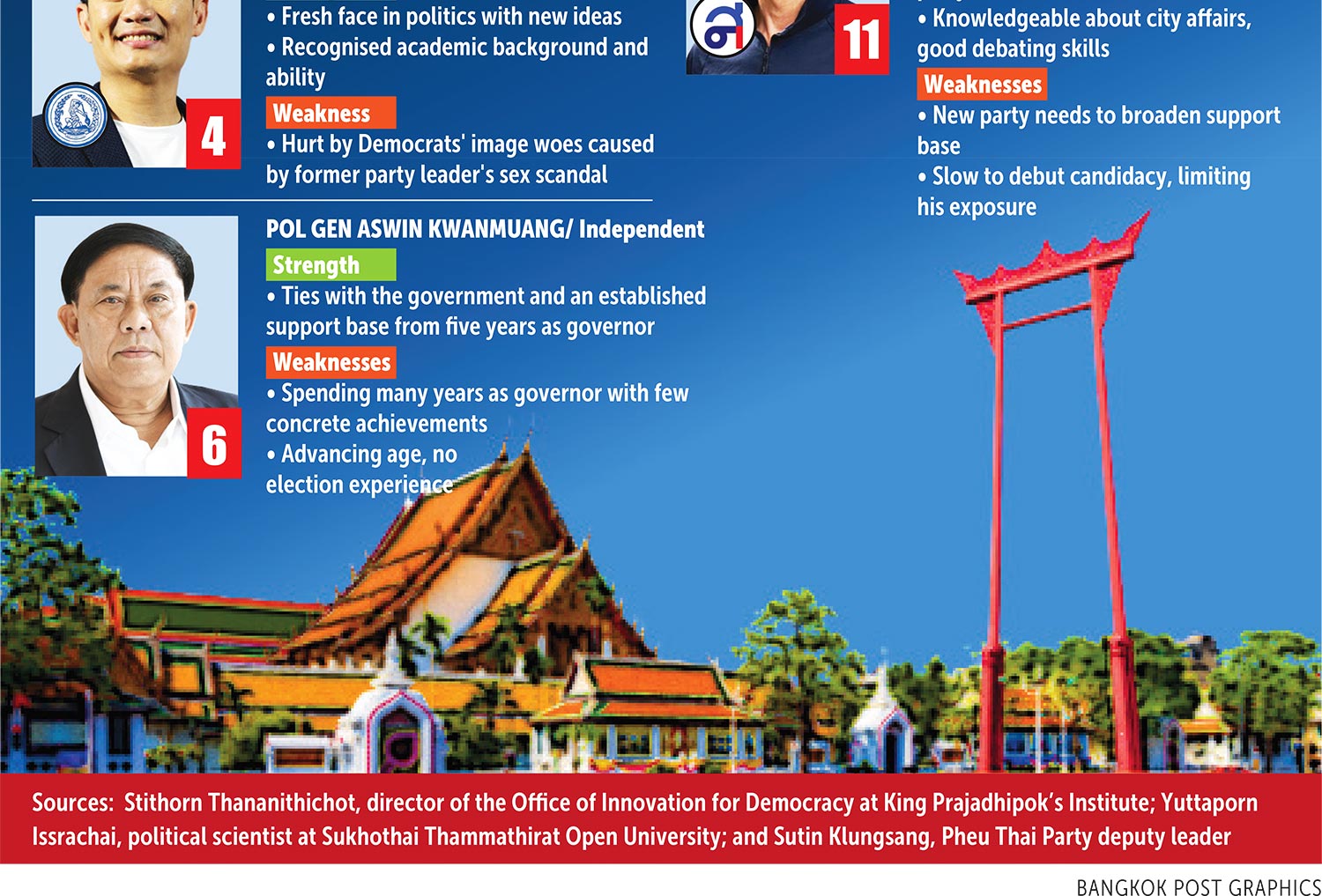 Mr Stithorn said if voters could be more accepting of candidates on the basis of their ability rather than their political affiliations, they would be open to more choices at the polls.

If such sentiment prevailed in the general election, candidates from the other side of the political divide could be regarded as being worthwhile candidates by government supporters.

That means the intensity of polarisation, fuelled in large part by the "ghost of Thaksin" could thin out.

The academic was referring to the longstanding fear of fugitive former premier Thaksin Shinawatra returning from self-imposed exile and taking back power, spurring another major bout of social and political unrest.

"If Bangkok voters can feel freer to elect a poll candidate from an opposing side, parties from either side of the spectrum might be able to work together," Mr Stithorn said.

The only concern that remains is the position of the Move Forward Party (MFP), which may not make it the easiest party to work with, he said.

The MFP has campaigned hard for social equality and changes to the lese majeste law.

Standing on the other side of the divide are Mr Chadchart and the MFP's Wiroj Lakkhanaadisorn.

They will be vying for support from 4.3 million eligible voters in the capital.

In recent weeks, well-known figures have vouched for certain candidates, including former Bangkok governor Chamlong Srimuang supporting Ms Rosana, who came top among Bangkok senator candidates with about 740,000 votes in the past.

The source noted Mr Wiroj has made significant inroads in the last lap of the governor poll.

The source added that even if support for Pol Gen Aswin, Mr Suchatvee, Ms Rosana and Mr Sakoltee were combined and diverted to Mr Suchatvee alone, it might not be enough to get the Democrats' candidate elected.

Sunday will also set the stage for the election of city councillors across Bangkok.

The voting pattern for councillors is likely to affect the next general election, which may be held later this year or early next year.

The councillors work on the ground and are connected with constituents. They have a bearing on a political party's popularity in the districts.

According to the source, the competition on Sunday will boil down to Pheu Thai, MFP and the ruling Palang Pracharath Party (PPRP).

The national security source said Pheu Thai is predicted to rake in the most councillor seats at 19, the MFP at least 11, PPRP at least 11, the Democrat Party six, the Rak Krungthep group linked to Pol Gen Aswin at least two and the TST at least two seats.

The source said the odds in the governor race were not in favour of the Democrat Party, which at one point was Bangkok voters' favourite choice.