Running out of options
Thailand
Politics

Running out of options

ABOUT POLITICS: Future looks bleak for Thamanat Prompow and Setthakij Thai after Lampang by-election debacle | A day before censure debate began some PPRP lawmakers let it be known they have no confidence in interior minister ahead of national polls

For a long time, many political watchers wondered how much of a force Setthakij Thai Party leader Thamanat Prompow was to be reckoned with.

Some said the facade presenting Capt Thamanat as an unbeatable political figure melted away when his party lost heavily to the Seri Ruam Thai Party in a by-election in Lampang's Constituency 4 on July 11.

The unofficial result pointed to a decisive victory for the small opposition party's candidate, Detthawee Sriwichai.

The unofficial vote tally released by the Election Commission confirmed Setthakij Thai's nightmare: Mr Wattana was behind Mr Detthawee, who captured 55,638 votes, a majority of more than 20,000.

A political source said Mr Wattana might have stood a better chance had he contested under the ruling Palang Pracharath Party's (PPRP) banner or at least if Setthakij Thai was still a part of the coalition. The PPRP, after all, has the might and means at its disposal and remains a titan on the political scene.

Reportedly, Capt Thamanat was quick to concede defeat and declared his party's loss was a credible gauge of the people's complete lack of faith in Prime Minister Prayut Chan-o-cha.

However, the source said it was premature and perhaps erroneous to generalise. For one thing, Setthakij Thai had made it known that it had a rocky relationship with the PPRP long before the by-election. Therefore, it was abundantly clear to a large section of voters that Setthakij Thai did not contest the July by-election representing the PPRP. For that reason, Gen Prayut's popularity, or a lack thereof, had nothing to do with how Setthakij Thai fared in the poll.

No big players, namely the Move Forward Party (MFP), Pheu Thai or the PPPR, contested the Lampang by-election. It has been determined that Seri Ruam Thai, the small opposition party which had never won a seat in a by-election before July 11, was the instant favourite because voters who supported Pheu Thai and the MFP were out to cast their votes for the only known representative from the so-called "pro-democracy" camp.

On other hand, some of those who picked Setthakij Thai at the by-election were voters by default or were against Pheu Thai or other opposition parties, according to the source.

The source added that Capt Thamanat blamed what he claimed was Gen Prayut's waning popularity to excuse his subsequent move -- pulling Setthakij Thai from the coalition and piling pressure on the government ahead of this week's censure debate.

But if the outcome of previous censure debates or the most recent first reading vote on the budget expenditure bill are anything to go by, the government can rely on "renegade" voters in opposition parties to come to the rescue.

Gen Prawit sided with Capt Thamanat even when the latter became embroiled in a bitter fallout with Gen Prayut.

Capt Thamanat was deemed to have gone too far by the premier after he was accused of going behind Gen Prayut's back and plotting to overthrow him.

Capt Thamanat had allegedly rallied small parties and some PPRP MPs to cast no-confidence votes against Gen Prayut in a censure debate in September last year.

Now that Setthakij Thai is on its own, it may well be looking beyond this week's censure debate and mulling over its future.

The source said not many options may be open to the party. With few strong support bases to speak of, except in Phayao which is Capt Thamanat's constituency, Setthakij Thai will need to work tremendously hard to build up support in places where it must compete with the likes of Pheu Thai, the PPRP, the MFP, or the Bhumjaithai Party, all of which are well-established.

Setthakij Thai must also race against time to do this since the next general election will be called around March next year when the government's tenure expires.

In addition, marketing the party as a new political brand could prove an uphill task. As some observers have noted, Setthakij Thai and the New Economic Party -- ironically -- have anyone with a grounding in economics which could be a selling point.

Alternatively, Setthakij Thai could do what most other parties have done -- merge with a bigger party and run a faction within it. Capt Thamanat also did not rule out a return to Pheu Thai, the party he defected from before joining the PPRP.

"Anything is possible in politics," he recently told reporters.

Knives are out for Anupong

Just a day before the no-confidence debate began Interior Minister Anupong Paojinda appeared to be in danger of losing his cabinet seat with the threat coming from lawmakers in the ruling Palang Pracharath Party (PPRP). 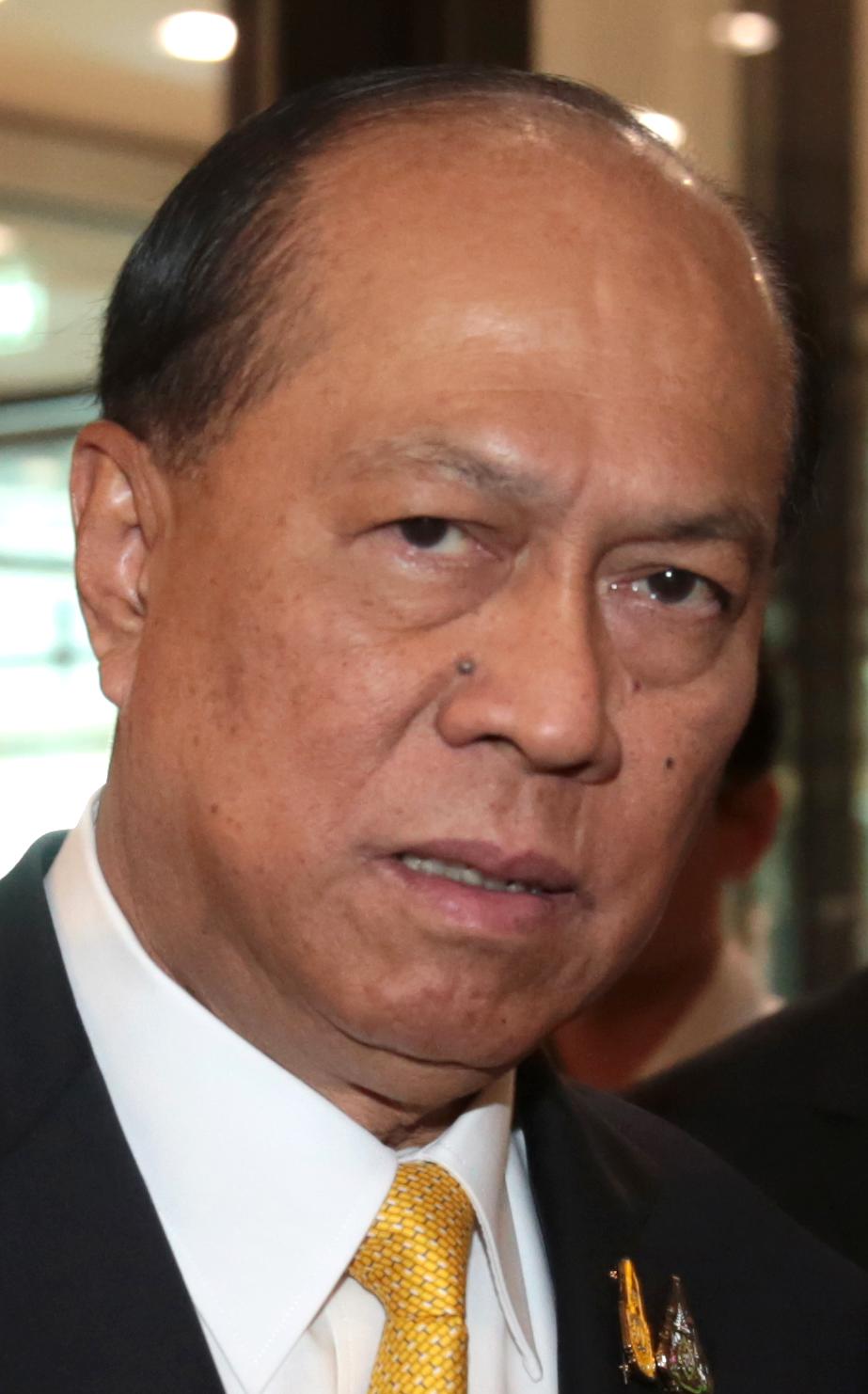 At a July 18 meeting of the PPRP MPs called by party leader and Deputy Prime Minister Gen Prawit Wongsuwon to make sure nothing would go wrong at today's vote to conclude the four-day censure debate, a group of party MPs suggested Gen Anupong's time as interior minister was up.

"Don't go against the party's resolution. Anyone who breaks ranks will be stripped of rights and will be left on their own," Gen Prawit was quoted as telling party MPs at the meeting.

The meeting would have ended there had Gen Prawit not asked if anyone had something to say.

One party executive then seized the opportunity to discuss a possible cabinet reshuffle after the censure motion with a proposal that Gen Prawit should take over as interior minister.

It was reported that five party MPs raised their hands in support of this idea, which was enough to cause a stir. It is extremely rare for party MPs to make this kind of move, according to a party source.

In their view, Gen Anupong was no longer the ideal choice as interior minister as the next general election is to be held shortly after March next year when the government's term expires. Gen Prawit reportedly cut them short before the discussion went further.

"Well, it is an opinion. I'll talk to the prime minister about this, but right now everyone must vote for the premier and 10 cabinet ministers [targeted in the censure debate]," Gen Prawit was quoted as saying.

This was not the first time Gen Prawit has been lobbied to take the interior ministerial post, which would have pitted him against Gen Anupong, his brother-in-arms.

Back in February this year, a report emerged that a faction of 21 MPs expelled from the PPRP and who have now joined the Setthakij Thai Party had expressed a wish for Gen Prawit to become interior minister in return for their continued support for the government. The PPRP leader publicly dismissed the report as baseless.

It is understandable why some PPRP MPs are seeking changes at the top of the Interior Ministry which is among the A-list ministries controlled by the core coalition party, according to political observers.

The ministry wields immense power, resources and has close ties with local and community leaders and it is believed that the political party that controls it can use these mechanisms to their advantage in elections.

Such a call for change at the Interior Ministry indicates that the ruling party is not happy with the way Gen Anupong is running it, according to Stithorn Thananithichote, a political analyst at King Prajadhipok's Institute.

Gen Anupong is known to work through the network of local leaders like tambon chiefs and village heads instead of relying on MPs to mobilise support for the government and the PPRP.

However, this method is not to the liking of some party MPs who feel they have been sidelined and want to play a greater role in working with locals to draw support for the party, according to the analyst. These MPs believe they can work with constituents better if Gen Anupong is replaced by Gen Prawit.

However, Mr Stithorn believes the MPs' call for an Interior Ministry switch will go unanswered because Gen Prayut, who has the final say in cabinet shake-ups, is unlikely to let the scales of power tip in Gen Prawit's favour and will do his best to maintain the status quo.

"Gen Prayut will need something he can use [as leverage] or things can go sideways. I think it is best to keep everything where it is," said Mr Stithorn.

According to the analyst, at this stage, the PPRP appears to have fallen behind with the election odds in favour of its rival, the Pheu Thai Party. But it is way too early to rule the PPRP out and too risky to place all bets on Pheu Thai.