Former prime minister Thaksin Shinawatra has sent a message to Thailand through his daughter, who is campaigning for a Pheu Thai Party comeback to the government.

"If he has a chance to return to Thailand, he would like to see all sides sit down to talk and work together because people are facing a big challenge - the waves of economic problems," Ms Paetongtarn told Pheu Thai supporters in Chiang Rai on Sunday.

"He is determined to do that," she added.

Ms Paetongtarn, appointed by the party as "the Pheu Thai family leader", is wooing voters in the northern province as part of planning for a landslide win in the next general election.

In the rally in Chiang Rai, chief campaign strategist Nattawut Saikua called for decisive wins in all provinces from Chiang Rai to Narathiwat to ensure a new administration takes change.

Pheu Thai was unseated by then army chief Gen Prayut Chan-o-cha in a coup in 2014. He has been prime minister ever since.

Government spokesman Thanakorn Wangboonkongchana on Sunday repeated his accusation that Pheu Thai has a hidden agenda to bring Thaksin and his sister, Yingluck, back to Thailand if the party takes office.

Thaksin and Ms Yingluck, another former prime minister, live in exile, mostly in Dubai, after fleeing multiple court cases brought by their opponents in Thailand.. 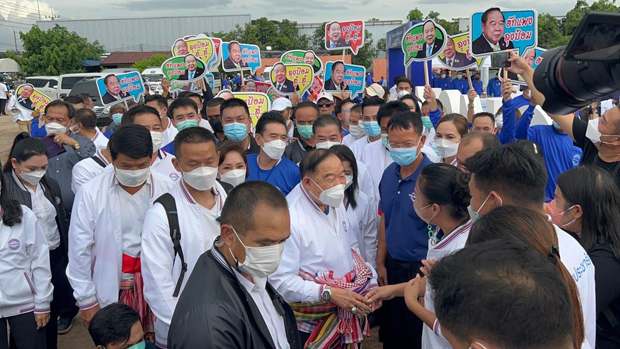 While Pheu Thai was in the North, the Palang Pracharath Party campaigned in Pheu Thai's stronghold in several northeastern provinces, starting in Nong Khai on Saturday.

Palang Pracharath leader Prawit Wongsuwon declared the ruling party would unseat every Pheu Thai MP in Nong Khai and challenge the party in all northeastern constituencies with a water management campaign to end the drought that had paralysed the country.

"It's a fight. I want to take all three constituencies," Gen Prawit said on Saturday of the coming battle in Nong Khai.

Pheu Thai won all three seats in Nong Khai in the 2019 election. A new general election must be held by March next year.