All eyes will be on whether an election bill that would provide small political parties with a greater chance to win list-MP seats can pass the third and final reading in parliament today amid fears a rescheduled parliament joint session may be cancelled again due to a lack of quorum.

On Thursday, Parliament President Chuan Leekpai ordered a special joint meeting of MPs and senators to be held today, which is the deadline for lawmakers to vote on the amendment of an election bill that supports a calculation of the numbers of list MPs by dividing all votes for list MPs by 500 as the divisor.

Today is the 180-day deadline for the bill to be passed.

A joint sitting on Thursday, which was supposed to be the last on the bill, collapsed due to a lack of quorum.

Observers said the lack of quorum was a deliberate move to derail the bill’s passage after the number 500 was adopted as a divisor to calculate party-list seats in the second reading last month.

The 500 divisor would give small parties better chances to win list-MP seats because the minimum number of votes needed to win a list-MP seat would be much smaller than with the 100 divisor in the original version.

According to legal experts, if the bill is not endorsed by the deadline as required by the charter, the original version, sponsored by the cabinet and drafted by the Election Commission, will be considered and approved by parliament.

The original proposed the number 100 as the divisor before a last-minute change in the second reading.

Deputy Democrat Party leader Ong-art Klampaiboon said lawmakers have come under heavy criticism after several parliament sessions were cancelled for lack of a quorum. “The public has been dissatisfied with their performance. They were elected to represent people in parliament but they have failed to carry out their duties,” he said.

“The collapse of the sessions has ruined the reputation of parliamentarians as a whole and those who were absent must provide an explanation why,” Mr Ong-art said.

He said it is likely that today’s session will also be cancelled again because some MPs and senators made it clear that they would be absent so the session will lack a quorum, to thwart the passage of the bill.

Pheu Thai Party MP for Bangkok and spokeswoman Theerarat Samretwanit said on Sunday the opposition party will not help make a quorum for today’s joint sitting of MPs to vote on the bill.

She said Pheu Thai MPs would oppose the bill’s provision to calculate the number of list MPs by using 500 as the divisor.

After deliberation, Pheu Thai MPs would not confirm they will turn out to make a quorum for the vote, she said. The party has 133 MPs.

Ms Theerarat said if a vote is held today and the bill is dropped, there will be no election law, just a political vacuum.

If the House is dissolved, the government will assume a caretaker role, she said.

Pirapan Salirathavibhaga, leader of the Ruam Thai Sang Chart Party, said the public is fed up with the farcical turn of events regarding the list-seat calculation method.

“No politicians care to push for legislation to address the plight of the people as much as they care about the 100 or 500 divisors,” he said.

Mr Pirapan said he believed today’s joint sitting would collapse again. “As far as I know, some MPs and senators have been instructed to register for attendance and return home.

“Regulations have been exploited for the sake of personal benefits and those MPs who do so are dishonest and could be in breach of a code of ethics for political office-holders and Section 114 of the constitution which forbids MPs from being influenced or dictated to by others,” Mr Pirapan said.

Somchai Srisutthiyakorn, a Seri Ruam Thai Party member, said it remains to be seen whether today’s joint session will proceed or end up collapsing.

Coalition parties such as the Bhumjaithai Party and the Democrat Party have confirmed they will attend the meeting, even if Pheu Thai doesn’t. “Therefore, all eyes will be on the stance of MPs of the ruling Palang Pracharath Party,” Mr Somchai said. 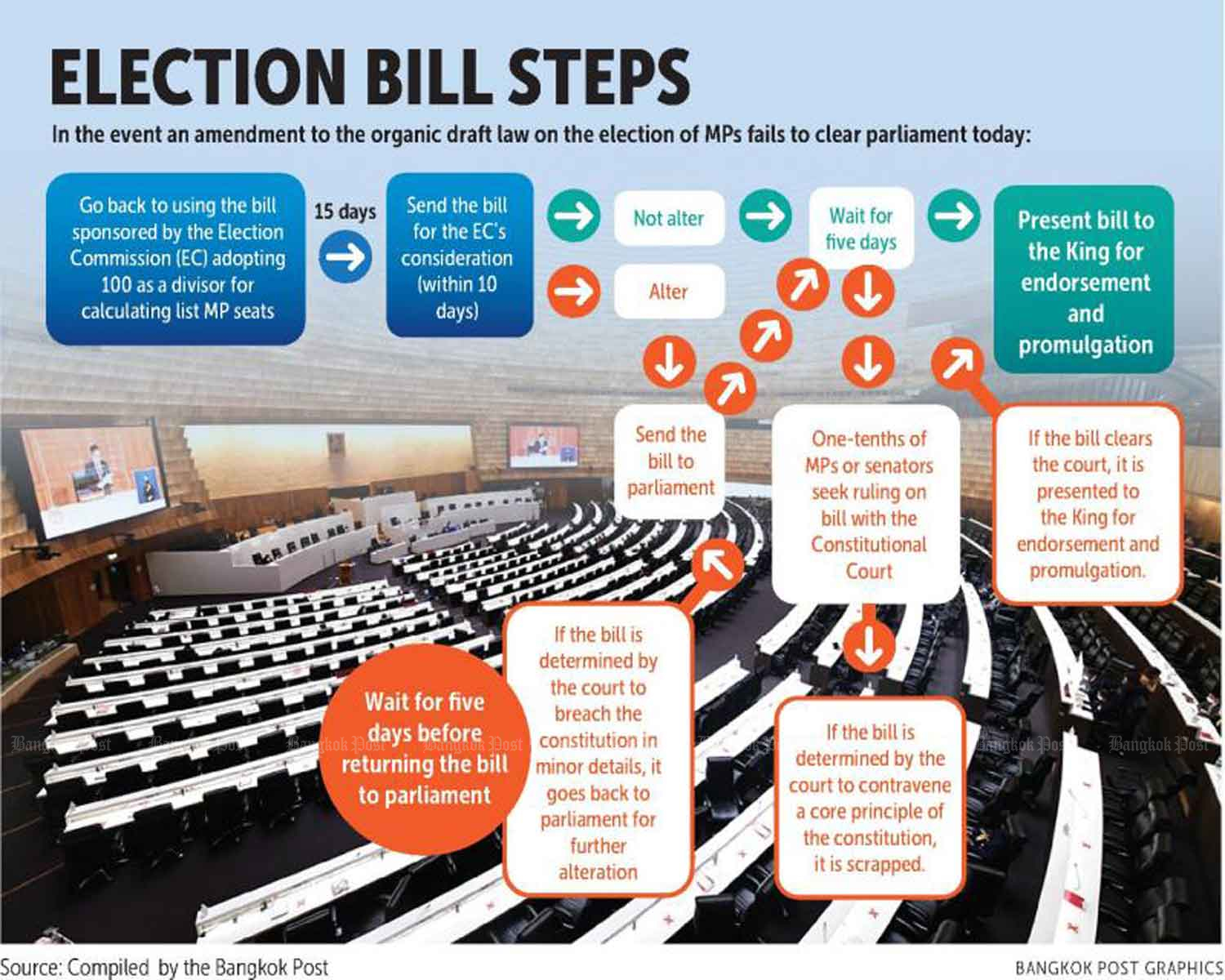