German targeted by royalist over protest against Prawit, Prayut

A key member of a royalist group is asking police to take action against a German man on a solo, public crusade against Acting Prime Minister Prawit Wongsuwon and Prayut Chan-o-cha.

Songchai Nienhorm, the founder and leader of the King Protection Group, filed a complaint against Moritz Pfoh at Nua Khlong police station in Nua Khlong district of Krabi on Saturday, accusing the 35-year-old German of conducting actions that could incite civil disobedience and interfering in Thai affairs.

Mr Pfoh was in the spotlight on Thursday when media showed him bearing a photo of Gen Prawit with a large cross mark over the image. The brief solo rally took place at Tapong intersection in Muang district of Rayong.

He later told reporters that he was acting to support the "90%" of Thais who did not like Gen Prawit and Gen Prayut, but dared not speak out in public against them.

Mr Pfoh also said he had showed his opposition to Gen Prawit in public on two prior occasions  — once at Phae market and another time in the Rayong municipality.

Mr Pfoh has been living in Thailand with his Thai wife for eight years, located near the famous Mae Ramphueng beach in Rayong.

The wife said her husband was obsessed with Thai politics and she never asked him to stop because he had no hidden agenda, Mr Songchai said in the complaint to police.

Mr Songchai's complaint was largely based on a report on Matichon online.

"More than 60 million Thais, or about 90% of the total population, were damaged by his groundless claim that they did not favour Gen Prawit and Gen Prayut Chan-ocha," the royalist argued in the complaint submitted to police. 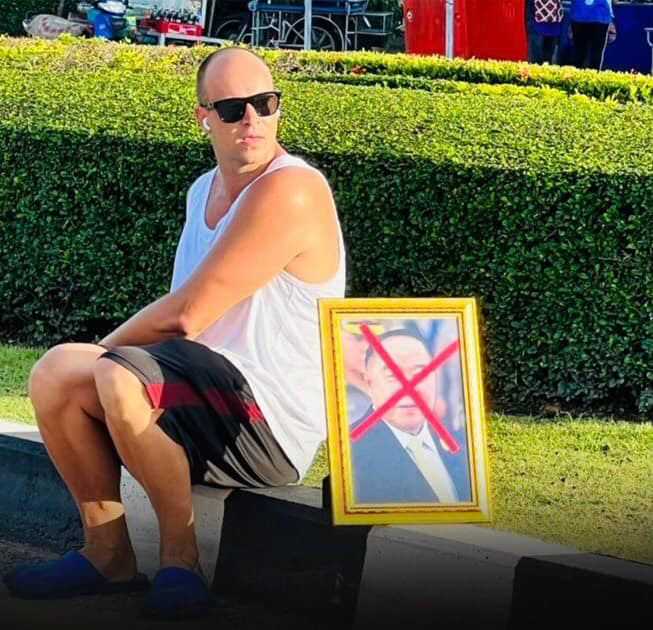 One day after the protest on Thursday, the German and his family decided to leave for Bangkok to stay at a condominium in the capital after police went to his house in Rayong to check his documents and warned him that his visa might not be renewed if he continues his political campaign.

Mr Pfoh said the police did not threaten him and treated him well during the inspection.

Pol Lt Col Pairoj Chanachai, the chief interrogator on duty at the Krabi police station where the complaint was filed, will forward the complaint to the station chief to decide whether they will pursue or drop it.

The case was registered in Nua Khlong district of the southern province because Mr Songchai resides there.

As the top-ranked deputy prime minister, Gen Prawit has been in full control of the government since the Constitutional Court on Aug 24 ordered Gen Prayut Chan-o-cha to suspend his duties until the ruling on his tenure is handed down.