All eyes will be on the Constitutional Court as it prepares to rule on the starting date of Prayut Chan-o-cha's tenure as prime minister on Friday, with academics saying a change will likely take place in Thailand's political landscape regardless of the decision.

If the court rules in favour of the embattled premier, Gen Prayut will be able to stay on, albeit on shaky ground as his critics will continue to challenge his authority.

But if the court rules against Gen Prayut, then he will have to step down from office and a new prime minister will be selected.

On Aug 24, the court voted 5-4 to suspend Gen Prayut as premier until it reached a decision on the PM's term limit.

The court, however, allowed him to retain his position as defence minister.

The suspension came after the court decided unanimously to accept the opposition's petition to review Gen Prayut's starting date in office, which has an implication on when he has to step down from the position.

Under Section 158 of the constitution, a prime minister can serve a maximum of eight years. 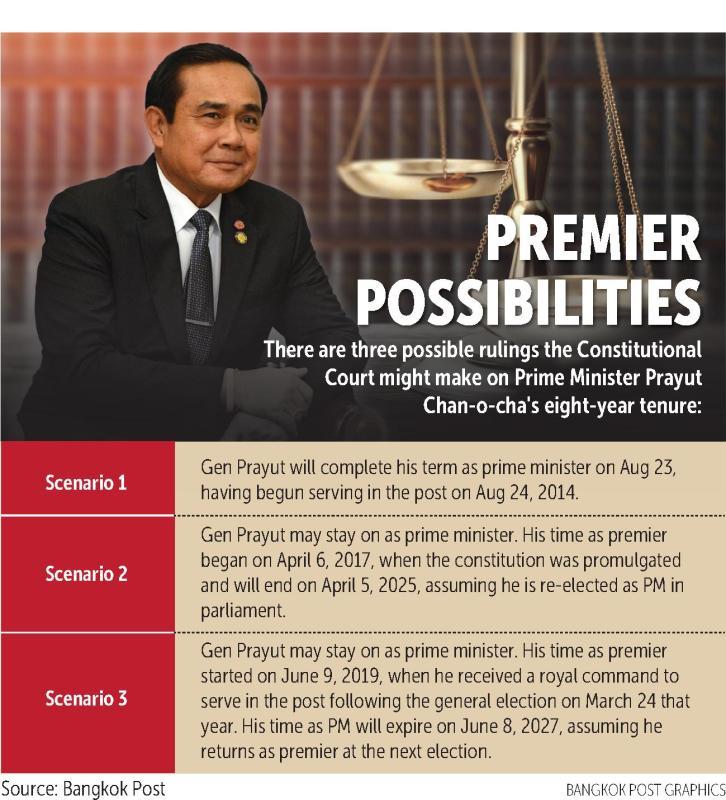 Gen Prayut's critics believe he should have stepped down on Aug 24, as they believe Gen Prayut first became prime minister on Aug 24, 2014 -- the date the provisional charter was promulgated following the May 22 coup.

Another group claims Gen Prayut's term will end in 2027, as they believe Gen Prayut officially became prime minister in June 2019 under the 2017 constitution.

Others, meanwhile, maintain the clock started in 2017, when the 2017 constitution replaced the post-coup provisional charter. As such, they believe Gen Prayut's tenure will end in 2025.

Stithorn Thananithichot, director of the Office of Innovation for Democracy at King Prajadhipok's Institute, told the Bangkok Post that demonstrations against Gen Prayut aren't likely to escalate, even if the court allows him to carry on in the role.

"Some groups will come out in protest but it is unlikely to snowball into large demonstrations," he said. "That said, [Gen Prayut] will be on shaky ground if he survives."

In the event the court rules against him, the entire cabinet will have to be dissolved, though the ministers will remain in a caretaker role pending the selection of a new prime minister, he said, noting the new prime minister may come from lists of candidates from political parties or a non-elected outsider.

Yutthaporn Isarachai, a political scientist from Sukhothai Thammathirat Open University, told the Bangkok Post that demonstrations will take place if Gen Prayut stays on in the role, but it will take some time for them to gather pace and momentum.

But if he has to step down as a result of the court's ruling, the process to select his successor will immediately begin, Mr Yutthaporn said.

He noted that a different political landscape will likely emerge after the conclusion of the Apec Summit which will be held in Bangkok in November, as some politicians are expected to defect to other parties amid rumours of a possible dissolution before the House of Representatives' four-year term ends on March 23 next year.

Deputy Prime Minister and Democrat Party leader Jurin Laksanawisit said on Thursday that whichever way the court rules, there will be no political impasse.

"There will be always a way out," he said

Col Winthai Suvaree, spokesman of the Internal Security Operation Command, said that security agencies have been monitoring protest groups but there have been no reports of any suspicious activities so far.

A source close to Gen Prayut said on Thursday that Gen Prayut will turn up for work at the Defence Ministry, after which he will follow the news at home. Gen Prayut will accept the court's ruling whichever way it goes, the source said.