The main opposition Pheu Thai Party has pledged to lift minimum wages and crop prices while slashing energy costs as it kicked off a campaign to end nearly a decade of military-backed rule in elections slated for early next year.

Pheu Thai also promised to boost economic growth rate to an average 5% annually if it is voted to power while widening the nation’s healthcare coverage and promoting creative skills and digital economy to help people generate more income.

The party's campaign, unveiled by former prime minister Thaksin Shinawatra’s daughter Paetongtarn on Tuesday, is part of its efforts to score a landslide victory in elections for the 500-member House of Representatives. These polls are due to be called by March.

While Pheu Thai is tipped to win the most seats in the election, it may still need the support of other parties to form the government as the 250-member Senate — nominated by the royalist establishment — will continue to vote in selecting the prime minister. Though it emerged as the single-largest party in the 2019 elections, Pheu Thai was thwarted by the Palang Pracharath Party, set up at the time to back then-junta leader Prayut Chan-o-cha as a civilian prime minister.

The opposition is betting on voter discontent stemming from the high cost of living and an uneven recovery in Thailand’s pandemic-hit economy to end Gen Prayut’s rein. The former army general trails Ms Paetongtarn in recent opinion polls with his government struggling to tackle a high rate of inflation and uneven post-pandemic recovery.

“We cannot lose this battle,” Pheu Thai leader Cholnan Srikaew said. “We have to win to bring back opportunities and hope for the people.” 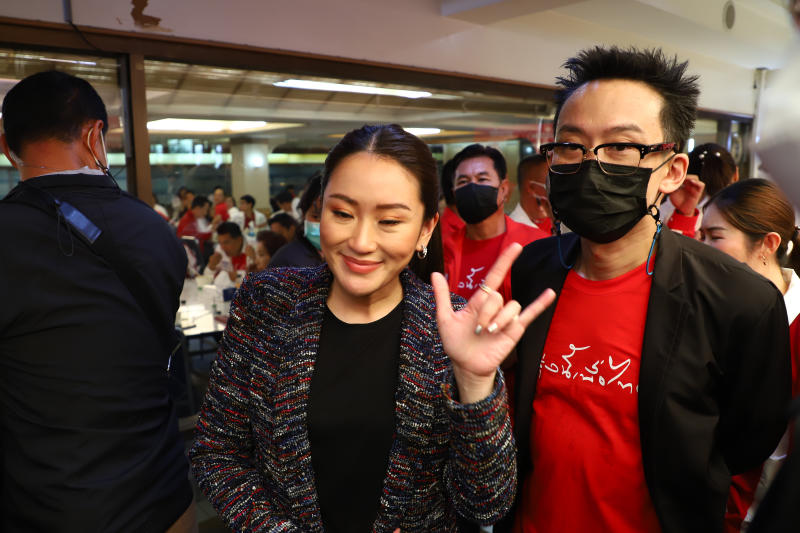 Parties affiliated with the Shinawatra clan have won the most seats in every general election over the past 21 years with farmers forming its core support base. These parties had introduced crop price support measures and insurance plans for farmers in the past that has helped it remain popular among voters.

“Prices must be increased for every agricultural commodity,” Ms Paetongtarn told party members at its headquarters in Bangkok. “We have done this, and we can do it again. By 2027, Thais must earn wages befitting their honour and dignity, at the minimum 600 baht per day.”

Ms Paetongtarn, who holds the title of Pheu Thai’s "family leader", has played a key role in rallying support for it in recent months and is tipped to be one of the party’s three candidates for the prime minister's job alongside real estate tycoon Srettha Thavisin. The party will unveil its three nominees closer to the election, Dr Cholnan said.

Ms Paetongtarn, who is expecting her second child, said pregnancy will not deter her from campaigning for the party.

Pheu Thai has unveiled its candidates for most of the 400 constituencies across the country's 77 provinces, stealing a march over the squabbling ruling coalition amid questions over Gen Prayut’s political future.