Pheu Thai's belief it can pull off a sweeping victory at the next election doesn't appear to be as strong as it once was v Mingkwan Sangsuwan has joined the PPRP, his third party in a year, prompting questions about his loyalties and motives

Prayut: Days as PM are numbered

With the countdown to the May 7 general election next year having begun, the prospect of Pheu Thai forming the next government on its own could become more distant as the fateful day draws closer, according to a political source.

For a while, the main opposition party appeared to be gaining popularity at the expense of a government that came under relentless attack for its handling of the Covid-hit economy, the flood crisis which blighted much of the country, and the controversial regulation granting well-heeled foreign nationals the right to buy land in a drive to spur investment.

Other opposition parties also did not hesitate to rub salt in the wound and ratcheted up their criticism of the government's blunders.

Pheu Thai has trumpeted its goal of taking parliament by storm -- raking in at least 250 seats, or half of those available in the House -- in the next polls to enable it to govern the country solo.

This came around the time when Prime Minister Prayut Chan-o-cha was suspended as prime minister while the Constitutional Court deliberated an opposition petition alleging his eight-year tenure had expired in August and that he must vacate office immediately.

For weeks, some political commentators were speculating on the worst-case scenario in which the government would be without Gen Prayut as its leader, with Deputy Prime Minister Prawit Wongsuwon poised to take over.

As opponents were chiding the "lame-duck" government and galvanised by the prospect of an imminent House dissolution in case a replacement prime minister could not carry the administration on, the Constitutional Court stepped up with a ruling that saved Gen Prayut.

The court determined he could potentially serve for two more years, although whether he would be nominated as a prime ministerial candidate and go on to win an election by parliament after the polls was another matter.

Even though Gen Prayut survived after the court's ruling, he will be constantly reminded that his days as prime minister are numbered, which erodes his appeal as the sought-after political property he once was at the 2019 election, according to the political source.

Stithorn Thananithichot, director of the Office of Innovation for Democracy at King Prajadhipok's Institute, explained that as long as Gen Prayut and Gen Prawit "dance to different tunes" -- a reference to a disconcerted relationship where Gen Prayut is viewed as aloof to the ruling Palang Pracharath Party led by Gen Prawit, which nominated him as its premier candidate after the last polls.

It has been strongly speculated for some time that Gen Prayut wants to ditch the PPRP in favour of the United Thai Nation (UTN) Party as it has long been perceived as a fall-back for the prime minister.

UTN leader Pirapan Salirathavibhaga said last week that his party would welcome Gen Prayut with open arms if he decided to split with the PPRP.

Gen Prayut has not ruled out the move, saying his political decisions will be decided by unfolding situations. This week, he spelt out his intention to continue as prime minister for two more years after the next election and find a suitable successor.

Mr Stithorn said if Gen Prayut and Gen Prawit failed to combine forces in preparation for the next election, Pheu Thai could still have a shot at pulling off an election landslide.

Pheu Thai may also be wishing and praying that coalition parties work against each other in as many constituencies as possible ahead of the next election.

However, Mr Stithorn said the major coalition players -- the PPRP, Bhumjaithai and the Democrats -- are not likely to be on a collision course in many constituencies.

Bhumjaithai, according to observers, has established a firm foothold in several provinces where either the PPRP or the Democrats won in the previous election. Either party would feel compelled to go head-to-head with Bhumjaithai in the next polls.

On the other hand, Pheu Thai will be in direct competition with the fellow opposition Move Forward Party (MFP) in a large number of constituencies. Pheu Thai and the MFP have found themselves estranged over the latter's declared election pledge to amend the highly sensitive Section 112 of the Criminal Code or the lese majeste law, a stand that is unpopular among several sections of voters.

The main opposition party has distanced itself from the MFP's Section 112 amendment policy which could prove a significant hindrance to the two parties forming a government together after the election.

That said, Pheu Thai is left with little choice but to look elsewhere, or even across the aisle, for political suitors. Those likely to emerge as medium-sized and large parties after the May 7 polls, which are ideal for government formation, are currently on the coalition side.

In the meantime, Mr Stithorn said Pheu Thai may be having doubts over whether it can achieve its goal of an election landslide, judging from its claim that it was ready to join with any party or parties, including those in the government, in shaping the next administration, provided they do not support Gen Prayut. 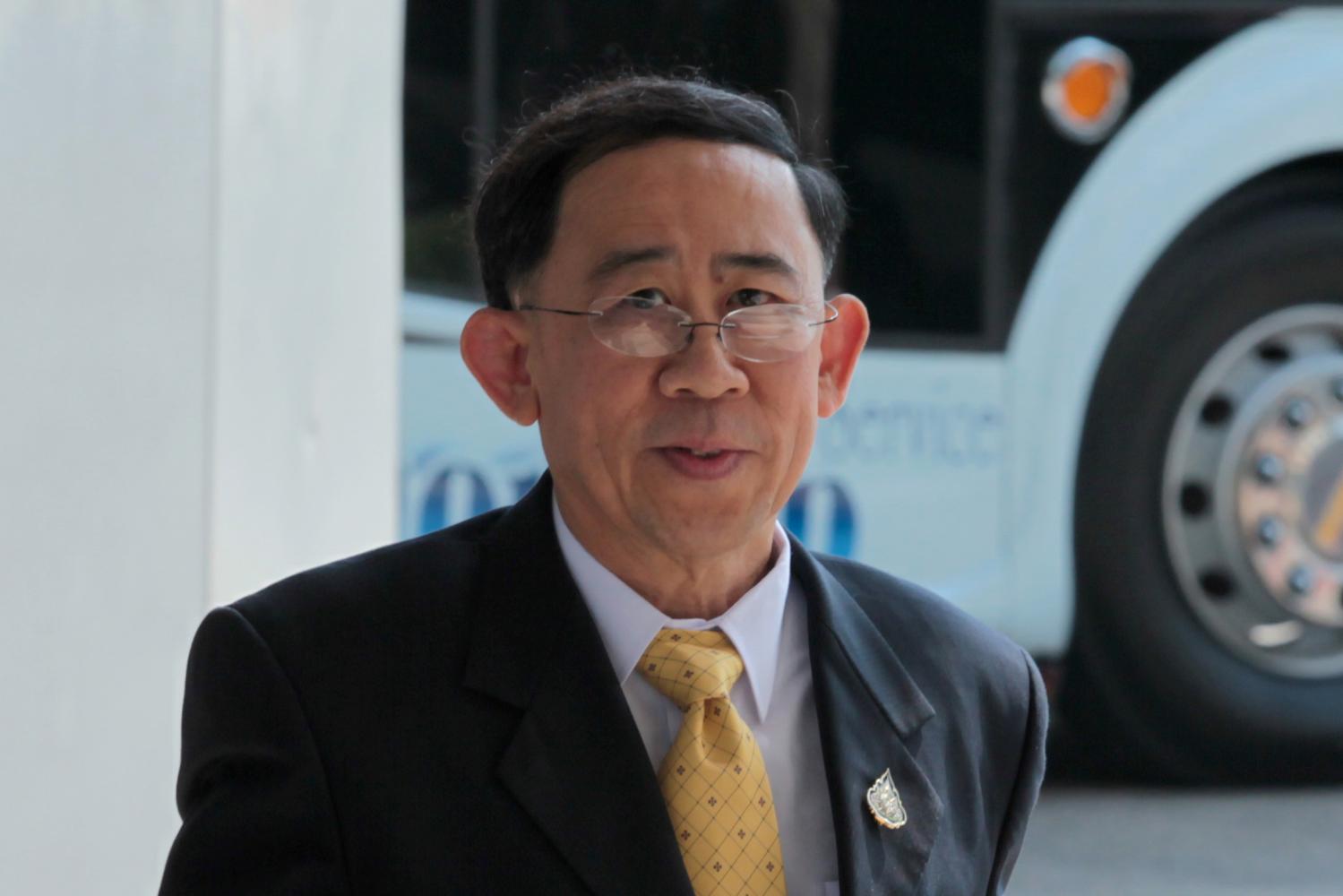 Mingkwan Sangsuwan, former leader of the New Economics Party (NEP), caught many supporters and critics off guard when he joined the Palang Pracharath Party (PPRP) this week.

It came after he gave up his NEP list seat and party membership in February.

When announcing his resignation to fellow lawmakers during a general debate, Mr Mingkwan, fighting tears, said he was not comfortable working in politics under current conditions.

Several NEP MPs had strayed from the party's pre-election stance to support Prime Minister Prayut Chan-o-cha and the PPRP-led government while he himself remained in the opposition bloc.

However, he stressed that he was not washing his hands of politics and he would prepare for the next polls to realise his goal of eradicating inequality and poverty.

A few months passed and news emerged that the former NEP leader was forming a new party called Okas Thai (Thai Opportunity) to contest the next election.

In early October, Mr Mingkwan was confirmed leader of Okas Thai, which was basically a rebranded version of the Forest Conservation Party, or Rak Puen Pa Prathet Thai previously led by Damrong Pidech, former chief of the Royal Forest Department.

But early this week, Mr Mingkwan became a star recruit of the PPRP with a chance of being named one of its prime ministerial candidates. It is reported that it was Wirach Ratanasate, a former PPRP deputy leader and chief government whip, who set up a meeting between Mr Mingkwan and PPRP leader Gen Prawit Wongsuwon.

Given his political views over the past four years, Mr Mingkwan was seen to have made a major U-turn by switching to the PPRP, a decision which has left many wondering what is really driving him.

It is worth noting that Mr Mingkwan mentioned Gen Prayut during the PPRP press conference, attended by key party figures, including Gen Prawit, to welcome him into the party's ranks.

"I'm really sorry to mention Gen Prayut today. He is no longer in the party. I just got this information around noon. I don't have any problem with Gen Prayut and I hold no grudges against him, even though I grilled him during House debates," he said.

Gen Prayut is widely speculated to be joining the newly-established United Thai Nation Party (UTN), also known as Ruam Thai Sang Chart, but the premier has yet to confirm this.

Mr Mingkwan's remark left many observers wondering if he was saying he was now free to join the PPRP because Gen Prayut was out of the picture.

In their view, the PPRP, which nominated Gen Prayut as its sole prime minister candidate, is still the prime minister's political vehicle to return to power with Gen Prawit being a playmaker. As long as Gen Prayut stays in power with the House going about its business as usual, his ties with the PPRP remain.

Some observers believe Mr Mingkwan's switching of affiliations will alienate many of his supporters who voted for the NEP, not because of its economic platform, but because of his stance against Gen Prayut's prolonged grip on power.

They also see his move as nothing but a fight for his political life and it has very much to do with changes to the election system that will be used in the next polls.

Under the new regulations, micro parties like Okas Thai look certain to be wiped out, and with it, Mr Mingkwan's ambition of being a top-tier player. He would have a better chance of getting elected on the ticket of a large party, according to the observers.

"The PPRP is in need of people with economic expertise while Mr Mingkwan is looking to increase his chances of being part of the next government. It is a win-win," said Phichai Ratnatilaka Na Bhuket, political science lecturer at the National Institute of Development Administration (Nida).

Mr Mingkwan established the NEP shortly before the 2019 elections, having aligned himself with a Pheu Thai-led group with a promise not to support the return of Gen Prayut as premier.

However, two months after the poll, he quit as party leader amid jockeying between Pheu Thai and the PPRP to form a coalition.

With some NEP MPs said to back the PPRP at the time, Mr Mingkwan's resignation was widely viewed as paving the way for the party to switch allegiance without him breaking his promise not to accept Gen Prayut as PM.

The NEP did not join the coalition after Mr Mingkwan quit the leadership. It often voted in a manner not in sync with the government.

Eventually, the NEP declared itself an independent opposition party while Mr Mingkwan remained a NEP list-MP and never missed a chance to grill Gen Prayut.