The government is under attack by a splinter group of its red shirt allies. 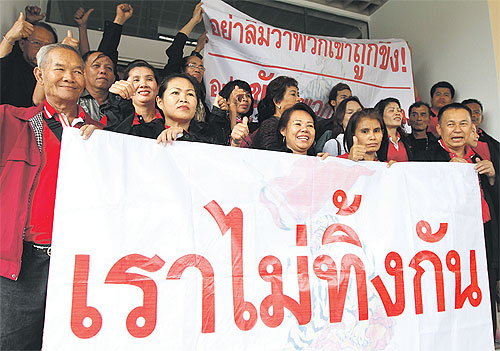 Supporters of the People’s Warriors Alliance, a red shirt splinter group from Ubon Ratchathani, vows they will stick by fellow red shirts detained at a special prison for political offenders in Laksi district. PATTANAPONG HIRUNARD

The Chak Thong Rob, or People's Warriors Alliance, a splinter group of the red-shirt United Front for Democracy against Dictatorship, says mainstream red shirts are ignoring the plight of red shirts jailed in the provinces for their part in the fight.

Members of the group have travelled from Ubon Ratchathani to the capital to seek clarification about bail conditions and compensation offers for their comrades.

They also want 300 arrest warrants against fellow red shirts in their province to be revoked.

Core leader Phichet Tarbootda, 57, yesterday blasted the Yingluck Shinawatra government and its red shirt members for being "inadequate" and "insincere" in attending to the welfare of those affected by the legacy of the May 2010 military crackdown.

Rural people helped install the Pheu Thai-led government, but had now been left in the cold.

"Have any core red shirt leaders visited the detainees since their arrest?" he asked.

"Are they visiting those being relocated here [the temporary prison for political prisoners in Laksi]?

"The government brought them here to show it has taken care of its red shirt supporters. But that's it _ nothing else," Mr Phichet said.

He said the government once criticised the Abhisit Vejjajiva administration for employing double standards, but now it is doing exactly the same thing.

"What have they been doing for the supporters who have been affected? I won't give them more time; their time has run out.

"Okay, there was a big flood, we understand, but now they are just playing musical chairs," said Mr Phichet, otherwise known as DJ Toy, who was originally charged in seven serious criminal cases. He was acquitted over emergency decree violations, terrorism and provincial hall arson charges but is now still fighting four other criminal cases.

Mr Phichet said the red shirt cabinet members have promised to secure bail for those members of his group still in prison.

They should get a move on, he said.

"We are not members of the UDD, we are the People's Warriors Alliance. We don't have to care for the government, only our people, so if there is no clear move to help our members, there could be more demonstrations," said the former elementary school teacher.

Including Mr Phichet, 36 members of the alliance travelled about 700km from the northeastern province to Bangkok. They met new Deputy Agriculture Minister Natthawut Saikua and Justice Minister secretary Thirachai Wutthitham.

They have sought the revocation of about 300 arrest warrants in Ubon Ratchathani, so the suspects can return to work freely without fearing for their safety. "Two years have passed. If the evidence is weak or non-existent, they should let them go free," Mr Phichet said after visiting four detainees _ Patama Moolmil, Thirawat Sajasuwan, Somsak Prasansap and Sanong Ketsuwan in Laksi prison.

Mr Phichet also asked when the authorities would release evidence seized in red shirt cases, ranging from tuk-tuks and motorcycles to pickup trucks.

Most of the cases had been dismissed but the vehicles remained in the possession of the authorities.

"We rely on those vehicles to make a living," Mr Phichet said.