A navy commander who knows almost every inch of the coast around the naval headquarters in Sattahip is reputed to be the best person in the force to bid farewell to the departed. 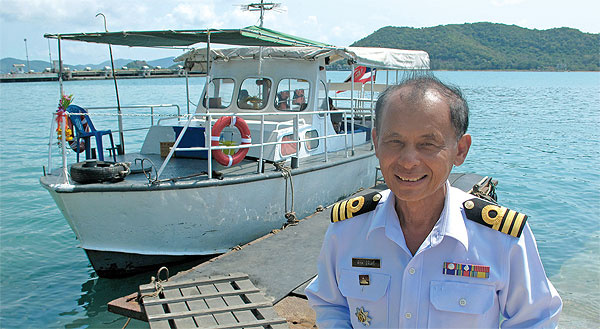 Cdr Damrong Meechant in full uniform waits at a pier at Sattahip naval base before performing the ash-scattering service on a navy vessel. PHOTOS BY NAUVARAT SUKSAMRAN

The backlog of bookings stretches for weeks for Cdr Damrong Meechant of the media broadcasting unit, who officiates in the ash-scattering ceremonies at Sattahip Naval Base in Chon Buri province.

Cdr Damrong, who was born into a poor rice farmer's family in Kabin Buri district of Prachin Buri, has become known by word of mouth for his heartfelt ash-scattering service.

Families clutching urns containing their loved ones' ashes board a small naval boat with Cdr Damrong waiting on board.

"I intend to do my best in every ceremony. I carefully observe every procedure and never rush to create a record. I want those who attend the ceremonies, as well as the deceased, to receive blessings. The living will be happy to see the dead go off to a peaceful rest," said the 55-year-old officer.

For each ash-scattering ceremony, Cdr Damrong wears his full uniform either in white or khaki to welcome the families at the Laem Thian pier in the Fleet Training Command at the Sattahip Naval Base.

The ceremonies are performed on board one of two boats set aside for the purpose. Each vessel can carry up to 15 people and is manned by three naval officers including the commander.

Cdr Damrong begins with briefly inquiring into the background of the deceased person. Then he delivers a speech to the family and asks them to light incense sticks to worship the boat goddess and the water god before setting off from the pier.

The boat heads to the middle of Sattahip Bay, which is dotted with small islands. The destination is a deep channel surrounded by Koh Nen, Koh Khao Phra and Koh Yo islands.

According to the commander, the channel marks an ideal location as it is believed that strong and clean currents will transfer the soul of the deceased to the next, better life.

CdrDamrong leads a prayer in front of the ashes and pictures of the deceased. The servicewasdelivered before the vessel set off to the middle of the bay for the ash scattering.

Thecommander places flowers and offerings and sprinkles holy water on the ashes.

Anaval officer unloads the ashes in a biodegradable container into the water. The container dissolves in water, spreading out the ashes and setting the garland adrift.

Before the boat reaches the spot, Cdr Damrong chants prayers to guide the soul to the middle of the bay. He also delivers solemn verses reminding the families about the impermanence of life.

"What is left behind is a person's goodness. We cannot escape death. Everyone will arrive at the end at one point or another," he said.

Cdr Damrong never dreamt of being a master of ceremonies. When he was younger he imagined he would be an ordinary civil servant.

After finishing junior high school, he joined the Naval Rating School as the tuition fees were not so high. He started his naval career in 1973.

As a sailor, he followed his commander's orders strictly, from cooking to scrubbing floors.

He spent several months on offshore naval missions and was often away from his family.

The navy started the ash-scattering unit as a public service in 2006. Cdr Damrong joined the unit two years later after he was enlisted to help perform the ceremony for a subordinate who had passed away.

The commander has taught the bereaved families to reflect on life as it is and life after one's last breath is gone.

His teachings may help the families, including the youngsters, to be more careful about their lives and not to take anything for granted.

Cdr Damrong says he is more at ease working as the master of ceremonies than when supervising media presentations for naval activities.

The ceremonies now take priority over his media role, with approval from his superiors.

He used to be the commander of a small vessel, which gave him plenty of sailing experience around Sattahip Bay.

This experience came in handy when he was looking for an auspicious spot to lay ashes.

Cdr Damrong conducts 60-70 ash-scattering ceremonies a month. His busiest time is on weekends when he officiates up to a dozen ceremonies a day.

He works from 6am to nearly 7pm on weekends and says he is exhausted by the end of the day.

"Many people share their experiences by posting footage of the ceremonies on YouTube, websites and blogs," Cdr Damrong said.

"We have no public relations activities to promote the ceremony unit. It's only word of mouth."

If time allows, after the ceremonies Cdr Damrong's team sometimes takes the families on short sightseeing tours of the naval base. They are taken to the dockyard and the monument of HRH Prince Chumphon Khet Udomsak, the father of the Royal Thai Navy.

His unit charges 2,500 baht per ceremony, which includes flowers, incense sticks, candles and other necessities. The families bring only ashes and photos of their dead loved one.

Proceeds go to a fund that offers scholarships to children of low-ranking officers and welfare to local officers.

The money also funds the maintenance of buildings in the naval base. Cdr Damrong and team members receive a nominal fee of 100 baht each per ceremony.

Cdr Damrong said the senior naval officers support the unit because it brings recognition to the force.

He is grateful to the navy for allowing him to take on the ceremony job, which has enlightened him about both life and death.

Before he reaches mandatory retirement in five years, Cdr Damrong plans to raise funds to build Buddha images, renovate temples and construct a monastery in Sattahip for people to learn about Buddhism.