Thai people have to study His Majesty the King's teachings and ideas and not just express their love for him, Chaipattana Foundation secretary general Sumet Tantivejkul said on Monday.

"We see the King but we don't often look at him. We want to see him because he brings us happiness but we have never asked ourselves about all the things he has done.

"We would not be suffering today if we followed his ideas, trust me," said Dr Sumet, who has served His Majesty closely for a long time. 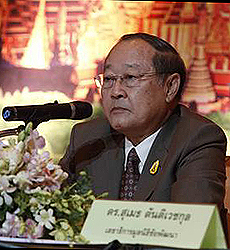 Dr Sumet, an adviser to the government's water management committee, said His Majesty fully understands the social landscape of the country, and is aware that different places have different responsibilities and societies.

Questions need to be asked in order to understand and develop each area correctly, he said.

People will find peace and be free from suffering if they follow the King's virtues. Nothing is too difficult to do if our intention is strong, he said.

"The liberal system is consuming the world and it can no longer survive because natural resources will be depleted. You can check and see that there are only 30 percent of the world's resources left," said the King's Chaipattana Foundation secretary general.

He said excessive consumption is a common cause of global crises, as could be seen in the economic and financial crisis in 1997. Greed is the most difficult aspect to conquer and His Majesty had then introduced the Sufficiency Economy philosophy, he said.

"His Majesty teaches dharma, which is to be moderate. Each individual, organisation and country has to know their own ability or strength and find the middle path for oneself.

"We must have ethics. No matter how wealthy we are, we cannot carry on if we don't have ethics. It's not important whether you're rich, what is important is to ensure that every baht spent will bring about benefits and happiness," Dr Sumet added.

"If we look carefully, our country is in a crisis like a person who has cancer that continues to spread without knowing, and the worst form of cancer is corruption," said the former National Economic and Social Development Board chief.

Thailand has never passed the corruption test as it ranks 80th out of 130 countries in the global corruption index, he said.

The country has fought corruption for a long time but it has never been eradicated. The current situation is worrying as it is not improving, he added.