A core leader of the Nitirat group and law lecturer at Thammasat University Worajet Pakeerat was assaulted yesterday at the university's Tha Phra Chan campus by two men. 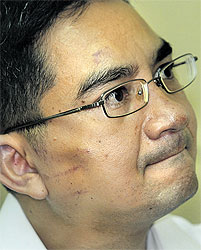 Worajet Pakeerat, a core leader of the Nitirat group, carries bruises to his face after he was yesterday physically assaulted by two men believed to be members of the anti-Nitirat group. PATIPAT JANTHONG

Mr Worajet believed the attack was linked to the Nitirat group's controversial proposal to amend Section 112 of the Criminal Code, or lese majeste law.

Speaking at Thonburi Hospital where he received treatment for bruises to the face, some cuts and a nose bleed, Mr Worajet said the committee's campaign would carry on.

The committee is attempting to change the lese majeste law by collecting signatures to compel parliament to consider an amendment. "Despite what happened to me, the signature collecting process will go on," he said.

Mr Worajet said two men rushed him from behind and punched him in the face when he was walking towards his car yesterday.

He said he could not see his attackers because his spectacles fell off.

He heard one of them shouting: "I have been waiting for you since morning," before launching the attack. The men fled on a motorcycle, according to eyewitnesses.

Teera Suteewarangkurn, a law lecturer and member of the Nitirat group, said he was told that a cleaner and security guard saw the suspects.

The cleaner told him she remembered the two attackers as being among people who attended a recent event organised by an anti-Nitirat group at the university.

Suthon Khemphet, a security guard, said the attackers were aged between 25 and 30 years old.

One of them punched Mr Worajet so hard in the face that he collapsed onto the ground before they fled, he said.

Thammasat rector Somkit Lertpaithoon condemned the assault. "People who disagree with Ajarn Worajet should engage him in an argument, not resort to the use of force," he said. The two attackers were probably outsiders. The university's network of CCTV cameras captured several images of the two men, Mr Somkit said.

He had warned of possible violence erupting at the university following Mr Worajet's involvement with the Nitirat group in its campaign to amend the lese majeste law. However, he did not foresee a personal attack such as this.

"I warned of a possible clash between people who may agree or disagree with the campaign. I did not mean a physical assault on a university lecturer while he walked around campus. I denounce this attack in the strongest terms," he said.