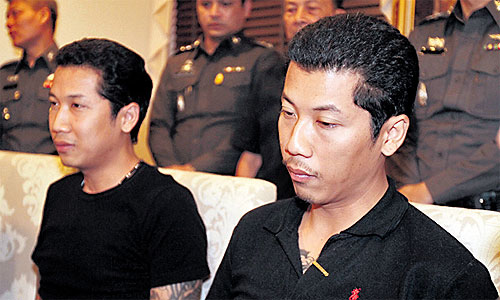 They turned themselves in to police after security pictures were aired in the media of the suspected attackers waiting at the university.

Police said the pair admitted attacking the law lecturer, who as part of the Nitirat group is campaigning for an amendment to Section 112 of the Criminal Code, or the lese majeste law.

Pol Lt Gen Winai declined to say whether the suspects belonged to an anti-Nitirat group.

"Let's say they have confessed [to attacking Mr Worajet] because they have different opinions [from Mr Worajet's]," Pol Lt Gen Winai said.

The suspects said they were not hired by anyone to assault the lecturer.

The brothers are from Pathum Thani and they had never been to the university before, he said. The two had waited for Mr Worajet since the morning and they did not know he had classes to teach in the afternoon, Pol Lt Gen Winai said.

Mr Worajet said on Wednesday the attackers rushed him from behind and punched him in the face when he was walking towards his car.

Asked by reporters why they attacked Mr Worajet, Mr Supat answered they were "upset" with the lecturer.

Mr Supoj and Mr Supat were charged with physical assault, which carries a maximum prison term of three years and a fine of up to 6,000 baht.

A police source said the brothers worked as security guards at a pub in Pathum Thani. Mr Supat was previously arrested in another assault case.

They attended a recent anti-Nitirat event in which Mr Worajet's effigy was burned, the source said.

Thammasat University yesterday condemned the use of violence to limit freedom of expression.

The university said it would follow progress of the police investigation into the case and step up security on campus.