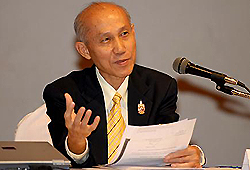 Born on March 24, 1941 in Ayutthaya's Pak Hai district, Paiboon earned a bachelor's degree in economics from Hull University in England in 1967.

He married Chada Krishnamra, now Khunying Chada Wattanasiritham and a former president and CEO of Siam Commercial Bank. They have a son and a daughter.

Paiboon had worked at the Bank of Thailand and the Stock Exchange of Thailand. He was head of the Government Savings Bank, a senator and an economic and social adviser to the government.

He was appointed social development and human security minister during the coup-installed administration of Gen Surayud Chulanont in 2006 and also served as deputy premier a year later.

Paiboon was a member of the National Economic and Social Advisory Council between 2001 and 2005.

He was also a member of the 27-member National Reform Assembly following the political violence in 2010.