The Supreme Court has banned Pheu Thai MP for Chiang Mai Chinnicha Wongsawat from politics for five years over a false declaration of her assets and liabilities. 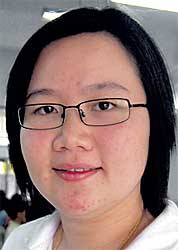 In its ruling yesterday, the court's Criminal Division for Holders of Political

Positions said Ms Chinnicha had intentionally made a false declaration of assets and liabilities in violation of Section 259 and Section 263 of the constitution and Section 119 of the Anti-Corruption Act.

The court thus disqualified Ms Chinnicha as an MP and banned her from taking up any political office and any position in a political party for five years.

The court also sentenced her to two months in prison, suspended for one year, and ordered her to pay a fine of 4,000 baht.

The National Anti-Corruption Commission filed a petition against Ms Chinnicha after its investigation found that she had made a false assets declaration after she was elected as an MP in January 2008.

The anti-graft agency said Ms Chinnicha borrowed 100 million baht from her uncle Bannapot Damapong but failed to include the debt in her declaration to the NACC on taking up her House seat.

She said she honestly believed she could not do anything about the money and had to wait until the ASC unfroze the assets.

He said the lawyers were trying to gather fresh evidence that may change the case so that Ms Chinnicha can appeal the verdict with the assembly of the Supreme Court within 30 days of the verdict being issued. This is in line with Section 278 of the constitution.

The case is not closed as long as the constitution allows this, Mr Prompong said.

The by-election is expected to take place in early June and will cost about 10 million baht, Mr Prapun said.