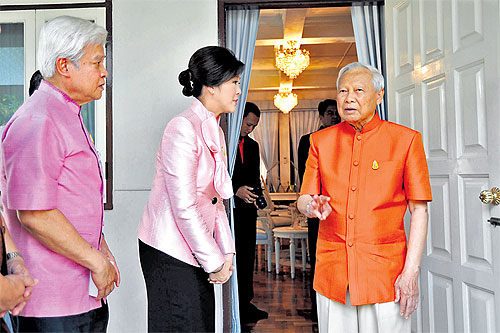 After the ceremony, which lasted about 15 minutes, Gen Prem held a discussion with Ms Yingluck for about half an hour.

The meeting between Ms Yingluck and Gen Prem was met with chagrin by the red shirts yesterday.

On thaienews.blogspot.com, pictures showing a merit-making ceremony to mark the birthday yesterday of Kamonkade Akkahad _ the nurse who was shot dead at Wat Pathum Wanaram on May 19, 2010 during the military crackdown on the anti-government protests _ was posted yesterday. The ceremony was held at Ratchaprasong intersection.

Criticism of Gen Prem by red shirt leader and Pheu Thai list MP Jatuporn Prompan during a red shirt rally in 2009 was also posted on the website.

Shinawat Haboonpad, a red shirt leader, said that many of his cohorts had phoned him to complain about the Prem meeting. He said the red shirts were severely disappointed about the meeting because they had lost their jobs, their husbands and children during their past political battles and many of them remained in jail. 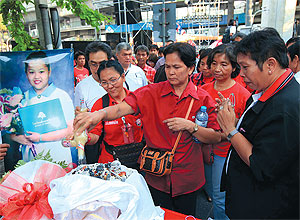 "It's the culmination rather than the start of this process, which seemed to have begun late last year in the aftermath of the big flood. Each side has to yield somewhat and give up the non-essential parts of their interests," he said.

However, the academic said the Yingluck-Prem meeting would turn out to be a raw deal for victims of political violence.

"It's sad to say, but it may be the only feasible political deal at the moment, given the present balance of political forces," Mr Kasian said.

However, in order to bring those responsible for ordering the April and May 2010 crackdown to justice, it will require a strong, forceful and independent mass party of the red shirts themselves, not the current Thaksin-directed Pheu Thai Party, he said.

But, this will take time and isn't going to happen very soon, he added.

"For the time being, what has been won is the actual moral and financial responsibility of the state for its violations of people's rights. We should work for an immediate amnesty, release, and bail for political prisoners and lese majeste detainees as a minimal condition for the elite's raw deal. A reform of the lese majeste law should come next," Mr Kasian said.

Puangthong Rungswasdisab, a political scientist at Chulalongkorn University, said Ms Yingluck was compelled to walk the reconciliation path with Gen Prem because of Thaksin's need to return home.

She said Thaksin himself wanted to come back so much as he said in earlier interviews that he was willing to propose an amnesty law that would absolve state authorities involved in the deadly April and May 2010 crackdowns. That would include absolving former prime minister Abhisit Vejjajiva and deputy prime minister Suthep Thaugsuban.

"If such an amnesty-based reconciliation law is enacted, I believe the Pheu Thai Party will split. If it's not broken altogether, it will lose a large support base especially from the red shirts. A blanket amnesty law is a direct affront to what the red shirts have been fighting for, namely justice for the dead."

Ms Puangthong said since the red shirts have become politically aware, it will not be easy for a few individuals in leadership positions to strike a deal and impose peace on the people.

"The red shirts are no pawns. They exist in large numbers. They could topple a leader if they unite. People in leadership positions must consider this factor."

Gothom Arya, director of the Research Centre for Peace Building at Mahidol University, hailed the meeting between Gen Prem and Ms Yingluck and said the meeting could be seen as a political symbol of some kind.

Mr Gothom said the government could explain that to the red shirt members who were unhappy with the meeting.

Pibhop Dhongchai, a core leader of the People's Alliance for Democracy, said the meeting was an attempt by Ms Yingluck to help Thaksin rather than resolve the country's problems.

Woravat Au-apinyakul, PM's Office Minister of the Pheu Thai Party, acknowledged the disappointment and said red shirts should realise that it is time for reconciliation for the sake of national development.