Chaovaret Jaruboon, who died recently, took the lives of 55 men during his career as an executioner but had a gentle demeanour that belied his grisly job

What sort of person leans over a sub-machine gun bolted to the floor, takes aim at a target on a white curtain in front of a condemned man strapped to a cross, and then pumps 10 to 15 bullets into his back? 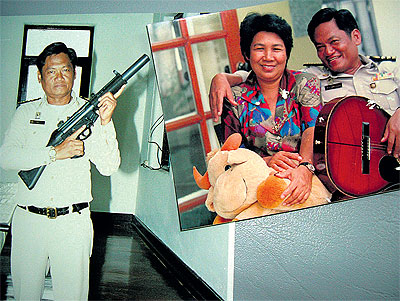 EXECUTING HIS DUTY: Chaovaret Jaruboon poses with the original gun used to kill dozens at Bang Kwang Central Prison. Inset, with his wife.

A family man, a rock musician, an altruist, a boozer and a civil servant in the Corrections Department for three decades.

In short: a man of wild contradictions and divided loyalties.

Chaovaret Jaruboon, who made his mark as Thailand's last executioner, succumbed to cancer on Monday aged 64, leaving behind a wife in her 40s, three grown children and the bloodstained legacy of executing 55 inmates over almost two decades at Bang Kwang Central Prison on the edge of Bangkok. 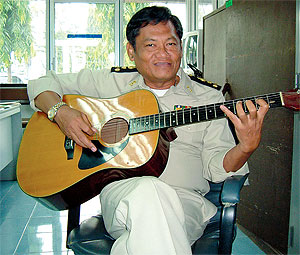 HIS GUITAR GENTLY WEEPS: Chaovaret in his office at Bang Kwang in 2004.

His cremation will begin at 4pm today at the royal temple of Wat Bang Thai in Nonthaburi.

Even as a boy, crime and vice were in his peripheral vision. Chaovaret grew up in the Bangkok neighbourhood of Sri Yan, the family's middle-class dwelling sandwiched between the mansions of magistrates and the hovels of harlots.

On his way to school every morning, he had to walk past a brothel that doubled as an opium den, where the dregs and fumes of last night's debauch mingled.

His father was Buddhist, his mother Muslim, and the Saint Joan of Arc School he attended was Catholic. Much later in life, he would boast that he had never visited a bordello, never taken drugs and only committed one crime in his life: stealing a pack of greetings cards from another student back in Grade 4.

As staunch a moralist as he could be, defending capital punishment until his dying day, he also had a raucously rebellious streak that he vented by playing guitar in rock 'n'roll bands that toured the GI bases in the '60s. For him, taking a job as a prison guard served the dual purpose of supporting his family while working towards that final parole for all working stiffs: retirement with a pension.

Chaovaret always said that the worst job on the execution team was not pulling the trigger; it was having to walk into the death row cell to read out the final decision of the court to the condemned man before whisking him off to a final meal and blessing from a Buddhist monk.

En route to the ''room to end all suffering'' (as the death chamber is referred to in Thai), Chaovaret said, ''I heard it all _ crying, begging and cursing me.

''But some of them just walked in without a word. They were ready to die.''

Chaovaret defused some dangerously combustible situations on death row. In his 2006 autobiography The Last Executioner, he remembered dealing with a serial rapist, convicted of raping and murdering a 10-year-old girl. When the condemned man was screaming at guards and still protesting his innocence, Chaovaret told him: ''Just think of it as bad karma coming back to you for what you have done. If you are positive when you go, you will end up in a better place, so empty your mind of anger and negativity.''

The contrite rapist wrote a letter to his father repeating the inescapable Buddhist cycle of life: birth, ageing, suffering and death.

HAPPINESS NOT A WARM GUN: From top to bottom, re-enactments of executions at Bang Kwang during the prison’s 72nd anniversary celebration.

One woman involved in a kidnapping-turned-murder fought the guards all the way into the death chamber and was pronounced dead by a doctor after taking 10 bullets. But as they brought one of her accomplices into the room, Chaovaret and the guards heard her scream in the tiny morgue. Not only that, she was trying to stand up. All hell broke loose.

''One of the escorts rolled her over and pressed down on her back to accelerate the bleeding and help her die,'' wrote Chaovaret. ''Another escort, a real hard man, tried to strangle her to finish her off, but I swept his arms away in disgust.''

After they executed one of her accomplices, the doctor found that the woman was still breathing. He ordered the guards to tie her back on the cross and this time they used the full clip of 15 bullets to ensure she was dead.

Chaovaret's experience on the firing line and ability to keep a cool head resulted in his promotion to the rank of executioner in 1984. He always said he did not want the job and only did it because it meant more money for his family.

Susan Aldous, author of the The Angel of Bang Kwang Prison, about her humanitarian work in Thailand's largest maximum-security facility, sees it a different way. ''When they asked him to become the executioner, I think they appealed to his sense of masculinity. Do you think you're tough enough to do this job? Before that, he was a low-ranking nobody, but that promotion gave him a sense of importance.''

Having interviewed him in the prison and seen him socially, I often thought he enjoyed the notoriety of his job. In between spells of playing surf instrumentals and Elvis covers on his acoustic guitar in the jail, he would take stabs at himself.

''I wasn't handsome or talented enough to make it as a musician,'' he would say.

This contradictory character, who later became the chief of foreign affairs at Bang Kwang, overseeing as many as 800 foreign inmates, was the only person in Bangkok that Aldous trusted to take care of her daughter.

''We used to joke that the executioner was her nanny.'' He also helped Aldous to untangle the prison's red tape so that she could run programmes for the dying and nearly blind.

''He would show me how to do the paperwork and he'd get the signatures. Then I'd be hugging all these Aids patients and he'd make all these jokes about how disgusting it was and that I was so ugly that this was the best I could get. But when the other male guards were not around, I'd look over and see him with a few tears in his eyes.''

Chaovaret did have a conscience. He also believed in karma. Before each execution, he would pray to a powerful spirit for forgiveness. He was not killing the man out of malice, he said, but because it was his duty. The 2,000 baht he received for each execution he religiously donated to a royal temple in Nonthaburi.

The final book he co-authored, A Secret History of the Bangkok Hilton, was with Pornchai Sereemongkonpol. At the start of this year, Pornchai saw him for the last time. ''He was in a wheelchair and quite bloated, but still in good spirits and cracking jokes. He always had a good sense of humour. I remember him telling me once that his daughter found it difficult to get dates because all the guys knew what her father did,'' he said.

Not long before he passed away, his wife held a special Buddhist rite to appease the spirits of the 55 men and women who ended up in his gun sights. She asked them to let him die in peace and not interfere with his reincarnation.