PM adamant she will not reform lese majeste law

Prime Minister Yingluck Shinawatra said yesterday she has no plans to amend Section 112 - the lese majeste law - despite an outcry over the death of a 62-year-old man jailed for the offence. 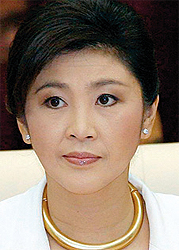 Ampon Tangnoppakul, who was dubbed "Uncle SMS", died of liver cancer on Tuesday inside Bangkok Prison Hospital while serving a 20-year sentence for sending text messages deemed insulting to the monarchy from his mobile phone to the former personal secretary of then prime minister Abhisit Vejjajiva in May 2010.

"I want to reaffirm that my government's policy is to stay put," Ms Yingluck said in response to questions about possible reform of the law.

"I have already told groups who push for amendment that the government's urgent mission is to solve economic problems."

Described as a "prisoner of conscience" by Amnesty International, he pleaded not guilty during his trial, one in a series under the royal defamation legislation, which critics say is used to stifle free speech.

His conviction triggered public protests against the lese majeste law. Under Section 112 of the Criminal Code, anyone convicted of insulting the King, Queen, Heir or Regent faces up to 15 years in jail on each count.

His death prompted renewed calls for reform of the lese majeste law with red shirts leading the clamour for the change.

The Campaign Committee for the Amendment of Article [Section] 112, meanwhile, said it has mustered enough support to initiate the amendment process of the lese majeste law.

In its statement dated May 10, the group said it had collected more than 10,000 signatures during the 112-day sign-up campaign which ended on May 5. It said more signatures were being obtained.

The group is in the processing of verifying the supporters of the move and is expected to announce the exact number of them on May 27.

In its statement, the group has described Ampon as a "political prisoner" and a "victim" of Section 112 of the Criminal Code.

It said the offence imposes harsh punishment without any regard for human rights or humanitarian reasons.

"That's why political prisoners under Section 112 are denied bail which is a basic right.

"Ampon was old and frail. He had been treated for mouth cancer. He was poor and had little education. He had no relatives outside the country," the statement said.

Yet, the statement said the man posed a flight risk.

Ampon's eight requests for bail were rejected. The appeal against the Criminal Court's verdict was withdrawn two weeks before his death and his lawyers concentrated on seeking a royal pardon to secure his release.

The group noted the reason for the harsh punishment was reflected by Courts of Justice spokesman Sitthisak Wanachakit who last year wrote an article about the case.

It said Mr Sitthisak's attitude that a person who threatens the institution of monarchy deserves severe punishment to deter others is predominant in Thai society.

"We don't expect those who are directly and indirectly involved with Ampon's tragedy to repent," the statement said. "But we do expect people who follow the case to be aware of the problems surrounding Section 112 and help make an unjust law stop hurting people even though the process will take time."

The group said it was planning a gathering on May 27 at Thammasat University.