PM won't rule out post in cabinet for red leader

The Pheu Thai Party has accepted a Constitution Court ruling disqualifying list MP and red shirt co-leader Jatuporn Prompan as an MP while expressing reservations about certain legalities and facts. 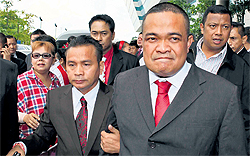 Pheu Thai PartyMP and red shirt leader Jatuporn Prompan looks dismayed after the Constitution Court yesterday disqualified him as anMP.Eight judges decided on a vote of 7-1 to strip him of his parliamentarystatus. SURAPOLPROMSAKANA SAKOLNAKORN

The Constitution Court yesterday decided on a vote of 7-1 to disqualify Mr Jatuporn as a lawmaker.

Court judge Jaran Pukditanakul did not join the court panel because his wife has been engaged in a legal dispute with Mr Jatuporn.

Prime Minister Yingluck Shinawatra has not yet shut the door on Mr Jatuporn to take a post in her cabinet despite the court ruling.

She said she would raise the issue with the party's legal team to consider how the court ruling will affect the party.

"Mr Jatuporn is a capable person," she said.

Mr Jatuporn was expected to be appointed as a minister in the next cabinet reshuffle.

Pheu Thai deputy spokeswoman Sunisa Lertpakawat made a statement after the Constitution Court decided to strip Mr Jatuporn of his parliamentary status yesterday.

Lt Sunisa said the party respected the verdict, although it disagreed with some of the legalities and facts concerning the case.

She said the party was confident Mr Jatuporn had all the qualifications as an MP considering that the Election Commission certified Mr Jatuporn's status as a Pheu Thai MP after the July 3, 2010 election, even though the EC later revoked his MP status.

Lt Sunisa said this showed that Pheu Thai had no intention to file an unqualified candidate to run in the poll.

The Speaker of the House of Representatives, on the recommendation of the EC, asked the court to decide if Mr Jatuporn had lost his MP status under sections 101(3) and 106(4) of the constitution.

Four out of five commissioners in November last year voted to disqualify Mr Jatuporn and referred the matter to the Constitution Court for a ruling via the House Speaker.

The EC earlier said that since Mr Jatuporn failed to vote in the July 3 general election last year he had lost his Pheu Thai Party membership and should consequently be disqualified as an MP. Mr Jatuporn was elected a list-MP for Pheu Thai in the same election.

Mr Jatuporn faced a complaint that he was not a Pheu Thai Party member when he applied to run in the July 3 poll because he was in jail at the time.

His request for bail to leave the prison to vote in the July 3 poll was denied by the court.

His incarceration meant he was unable to vote, which rendered him ineligible to take his seat in parliament.

A source at the court said that of the eight judges, only Chat Cholaworn was in the minority.

The source said Mr Chat also said when considering the case, any laws with the status below the constitution cannot be taken into account so the decision to disqualify Mr Jatuporn's MP status must be in line with the constitution only.

In considering the case, the court yesterday also cited the 2007 organic law on political parties.

After leaving the courtroom, Mr Jatuporn said he accepted the court's ruling.

He said he had been resigned to his fate since the EC disqualified him and that he "never dreamed of getting justice from the Constitution Court".